During one or more of my Suikoden reports, I’ve been hinting about a potential purchase I’ll be making. Now I can safely say it happened. I bought an ARCHOS GamePad and, spoiler alert, I’m very happy with my purchase. I’ll give you a sort of review.

I try to be a frugal person, though you could easily argue that buying a tablet for gaming or even a tablet in general isn’t frugal at all.  Because of that, the first thing I consider is the price. That means I would absolutely never buy an Nvidia Shield or even a Nexus tablet. You could buy a decent laptop for work and light gaming in that price range, so I’d have a hard time justifying the purchase.

Now, I’m sure that in the western countries, people see things differently and for good reasons. For one, the prices are different. Additionally, it’s much less of a big deal to buy something like that, considering the relativity of cost and income.

In Croatia, an average net wage is 5547 HRK, or about $1385. I’m placed marginally above average, but most people are way bellow that. The cheapest Nexus 7 by Asus costs 2099 HRK, or $374. That’s a lot. You can’t even buy an Nvidia Shield in Croatia, but if you order it from out of the country, it would cost you about 300 GBP, close to $500, which is double the cost of one if you buy it from Nvidia directly.

In comparison, the ARCHOS GamePad cost me 999HRK, bought locally, meaning it will be easy to replace if it malfunctions. That’s $177, by the way. Of course, it’s also a much weaker gadget, but for the things I wan’t to use it on, it’s more than sufficient. Outside of Croatia, it can be found for cheaper.

Again, don’t get me wrong, devices like the Nexus or the Shield are amazing devices. They are simply outside of my price range, mostly due to where I live.

What is the ARCHOS GamePad?

The ARCHOSGamePad is an Android tablet with physical buttons, mostly arranged to emulate a PlayStation controller, except the R2 and L2 buttons are placed on the front face, bellow the D-Pad and the four primary buttons respectively. 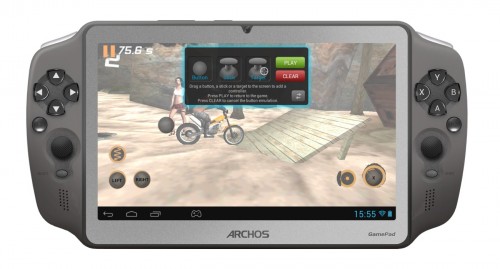 It has a nice, sleek look.

But most games use the touch screen, you would say. Well, you’d be surprised. There’s in fact plenty of games out there that do support physical buttons if your tablet has them. More importantly, though, most emulators support physical key mappings.

How does ARCHOS Gamepad perform with Android games?

I’m not that into native Android games. Most simply feel a bit too shallow for my liking. That being said, I’ve tried it on a few of them, and each and every one runs smoothly. What follows is a list of games that play perfectly on the Gamepad. I might even update the list as I try more of them.

Avadon: The Black Fortress does not officially support the ARCHOS GamePad. It runs completely smoothly, but the screen might be a tad too small, with some of the buttons harder to tap. The game is simply intended for bigger screen devices.

Emulation on the ARCHOS GamePad

Emulation is the reason I bought the ARCHOS GamePad. My hopes were that it would run PlayStation games smoothly and it does. It also runs a lot of other games quite well. I’ll list the systems I tried it on.

I’ve tried it on various games and have yet to successfully load one. There’s either an issue with the image format I’m using (I tried several), or it simply doesn’t work well.

It runs most things I throw at it, but I’m not sure if it’s 100% speed all the time. It looks smooth, but it’s extremely hard to tell if I’m seeing stutters on occasion.

Completely smooth for every game I threw at it. This is my emulator of choice for the PlayStation system, even though it costs money. Get in on the PlayStore.

I tried out the PPSSPP and it runs games, but it’s nowhere near full speed. That’s fine because I didn’t expect it to be, but I should still put that out there. If you want PSP emulation, the ARCHOS Gamepad is not for you. Maybe if the emulator improves it’s speed in the future, but not now.

There are several N64 emulators for the Android, but most of them are buggy in one way or another, so it’s basically just like on the PC. The one that seems to work best is the N64oid, which plays the two games I’ve tried out, Super Smash Brothers and Banjo Kazooie almost flawlessly. It even runs them fast enough to allow for some fast-forwarding. It used to be on the PlayStore, but doesn’t seem to anymore, so I got N64oid of SourceForge.

SuperGNES is my emulator of choice for the Super Nintendo. It supports physical buttons (as do all the emulators I’ve mentioned up to this point) and it has a nifty auto-save feature, saving the state of your current game as you exit the app.

GameBoid is the emulator I’ve picked for the GBA. It runs the Castlevania games I’ve tried out without any errors, and it again supports physical keys. I couldn’t find GameBoid on the PlayStore, so I got it off SourceForge.

The lower tier (performance-wise) consoles I’ve tried out all work great with the emulators contained within Retroarch, so I haven’t been looking for any specialized emulators for those. Unfortunately, Retroarch currently isn’t on the PlayStore, so you’ll probably have to side-load it.

DraStic is a new emulator for the Nintendo DS and it runs New Super Mario Brothers without any issues at mostly full speed. There is an occasional stutter, but there is no real slowdown. I haven’t tried any other game, but considering the one I tried is mostly 3D, I’m very happy with what I have here.

I never did do much with the Amiga, but I tried UAE4Droid and it seems to work. I tried out a game and it started up at full speed. The only issue is that it was mouse controlled and mouse seems to be very clunky.

DOSbox Turbo is a DOSbox port for the Android. As the PC version, it’s complicated to set up, but there is a front-end called the DOSbox Manager that helps with this.

It’s a matter of copying the default configuration DOSbox Manager provides, tweak it a bit and then write an autoexec file with the command needed to run a specific game (mount a folder on the device as C: drive and run the game’s exe). It even has experimental support for absolute mouse emulation, meaning there is no clumsiness that plagues the Amiga emulator above.

The best part about it? You can simply copy the install folder from  a GOG version of the game and it will work, as long as you handle the configuration.

In any case, these are the things I had time to try out. Outside of that, I copied all my PlayStation save files from the PSP using the approach I described in my guide. I now have all the saves from all my PlayStation games in a single ePSXe memory card file on my ARCHOS.

If money is of no concern, the best approach is probably to get an Nvidia Shield or some sort of high-powered regular tablet such as a Nexus, combined with an externally attached controller.

For the price range I’m in, there are the JXD devices. I could have probably gone cheaper with one of those, but honestly, the GamePad looks more robust and the ability to make use of the warranty if I ever have to was worth it for me. Sending a JXD back to Hong Kong simply doesn’t sound reliable to me. It needs to be said that JXD does offer a wide range of devices and their latest JXD 7800 seems extremely powerful for the price it asks. The issue is that it’s really difficult to find right now.

Additionally, there’s the ARCHOS GamePad 2, which doesn’t seem to be out yet. It sports a better screen (1280×800 IPS), a stronger CPU (Quad Core vs Dual Core) a sleeker design and it moves the R2/L2 keys to a location next to the existing R1 and L1 keys.

ARCHOS GamePad is an excellent emulation device well worth the money if you have an interest in retro gaming. It’s also quite performant when it comes to most native Android games, but in all honest, this probably isn’t the reason most people will be buying one.

The reality is, you’re probably here because you wan’t to know how the ARCHOS handles emulation. Basically, ARCHOS GamePad emulates everything up to and including the PlayStation and the Nintendo 64 without any issues. It’s probably one of the best emulation machines you can get in this price range.