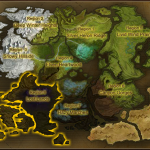 It finally happened. Over the past week or so, I’ve been logging in to Ancient Summoner more and more rarely. I think I’m finally getting free of this drug, and it could not have been sooner. 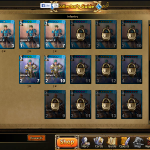 We’ve already established how and why Acinent Summoner is a typical Skinner box. Regardless of that, I’m continuing to play it, though less and less as the days go by.

Ancient Summoner is what it is

The game hooks you in the most basic way by giving you meaningless rewards for meaningless actions and wraps it all up in a collectible game.

It works on me. It doesn’t work as well as it used to because I have about 200 days of play time in World of Warcraft, but it still works to a degree. The game has kept me hooked for about 2 weeks now, with about an hour or two of play time per day. 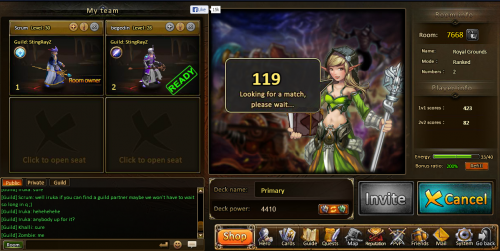 The queue system might be broken. Sometimes it’s instant, sometimes you wait to infinity.

I’m not sure I should call it play time, though. I log in, quickly click through all the actions that are simple to do and offer decent rewards and then I start doing battles in auto-mode, where I let the computer just use cards at random. I lose often, but the only time investment I need is to click in every now and then to enter a different battle.

This worked all the way up to level 25 or so, but it’s not working as well as of lately. Due to that, my time spent playing Ancient Summoner is slowly, but surely dropping.

There’s no doubt in my mind about it now.  For example, there was a special offer for gold buyers a few days ago. Buying a big enough pack would get you a Yumi Swiftshot. This character has the ability to do 3 ranged damage to any newly summoned creature. The ability outright destroys any chance to quickly summon in reinforcements and greatly weakens even your higher level card’s chances. To my knowledge, there is no other way than paying real money to get Yumi Swiftshot. If there is, it certainly isn’t remotely as easy as simply paying.

There are other, similarly powerful cards and most of them can be gotten easily with real money.

I get home from work, make myself a meal and start up my computer. I start browsing reddit or viewing YouTube as I eat (I have to watch or at least read something while eating, for some reason) and log in to Ancient Summoner. I queue up some arena or boss battles and put them on automatic while eating. Once I finish eating, I do a few of the quick and easy tasks to gain the various rewards and currencies, see if I have enough resources for a decent upgrade and then continue queuing for automatic battles, while doing other things on my computer. For instance, currently I’m working on a side-project for a developer conference I’m attending. 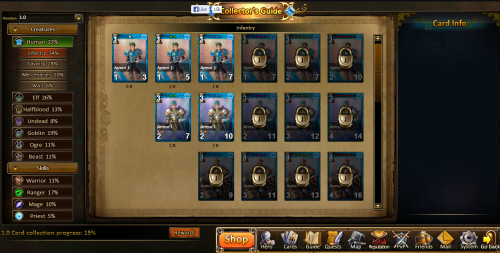 I don’t think I’ll aim to get all the cards. I’d probably have to pay to do that anyway.

Once I’m ready to actually play, I join a few tougher battles, which actually require my attention. Sometimes I win a few of those and sometimes I don’t. After all of that, I go to an expedition and log off. In the morning, before work, I log back in to get the expedition resources, since there’s a 12 hour maximum for any expedition, and then rejoin and expedition until after work, when the cycle repeats. That’s all there is to my playing of Ancient Summoner.

How far did I get?

My mage character is level 28 and my deck power is at 4410. On its own, these numbers mean nothing to someone who isn’t playing the game, but basically, I’m at a high enough level to have unlocked all of the primary activities, or so I think.

As for deck power, I also have no idea what it means, but it increased by about 800 after my recent reassembling of my primary deck. Most of my cards are or rare (3) or higher rank. Against the computer, I don’t have much trouble winning unless their deck is weird on some way. Against players of my level, if they haven’t bought any cards, I have a fair chance.

I still have plenty of cards to unlock and higher levels also mean higher-leveled boss battles and special events, so I couldn’t say the game is completed in any way. What I can say is that I’m quickly growing tired of it and will soon probably have my fill of it all.

I also joined a guild, most for the personal benefits this gets me. Contributing silver and gold to the guild gives you contribution points, which you then spend on research. This research gives you building upgrade discounts, various bonuses and improves the odds in card and equipment crafting.

At level 25, the tower of challenge, or whatever the place is called, became available. I can’t really say I completely understand the place, but from what I can see, it’s just another source of another currency and set of rewards. You get a single free attempt at challenging the tower per day. You fight a set of increasingly more difficult battles on each floor of the tower and if you lose once, that’s it, unless you buy another attempt that day for 30 gold. The rewards can be decent, but attempts are expensive, so you are tempted to buy gold.

It’s getting harder to progress without paying

This deserves its own title. The further along I get, the slower the rewards are trickling in. It now takes a few days to get enough crystals for a single building upgrade and the gold shortcut is more and more obvious.

I won’t use it though. I can afford to buy gold, which is something I wouldn’t be able to say a few years ago, but I refuse to do so. I’ll play this game for as long as it keeps me interested, but I won’t buy progression.

Should you play it?

No, you shouldn’t. It’s an MMO that works and manages to pull you in. It won’t give you anything meaningful, though, so you aren’t missing a thing if you aren’t playing Ancient Summoner. Don’t play it. Play something else instead.

As for me, I already got myself sucked in. Vagrant Story and Might and Magic Book Two suffer for it, but it won’t stay that way for long. Hopefully, I’ll get tired of Ancient Summoner sooner rather than later. 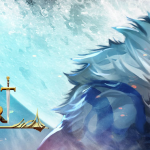 I talk the talk, but I do not walk the walk. Ancient Summoner is everything I’m supposed to dislike about modern gaming. It’s predatory in its methods and it serves to steal your time and leach money out of you, instead of giving you actual, proper enjoyment. And yet, I’ve been playing it for hours over the past week.Continue reading