Tag: Conquest of the New World

A few days ago, a pack of games was for sale on GOG.com. The pack contained a game I used to play as a kid and remember greatly enjoying. The game was Conquest of the new World and, while it has aged well, I have to admit I let nostalgia get to me a bit, since it’s not as awesome as I remember it.

Had you asked me back then, I’d probably say this game was just as good as the first Civilization. Well, I installed it yesterday and got around to playing it today. It’s fun and interesting, but nowhere nearly as deep or as enjoyable as Civilization.

Considering the topic it deals with – exploration and colonisation of the New World, you might compare it to Colonization. But, even though the overall genre is the same – a turn-based strategy, i would not call this a 4x game, nor could I Compare the two directly.

You start a new campaign of Conquest of the New World with a ship anchored to the coast of an unexplored continent, and a few units on board. 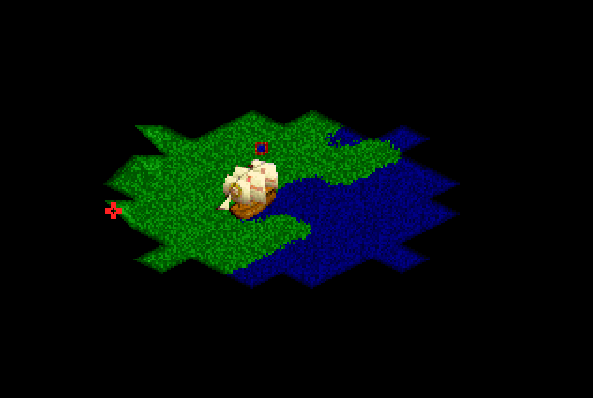 Pictured: The start of a Conquest of the New World Campaign

From this point on, you continue to explore with your ships and your settlers, but also start building up your town and setting up your defenses.

Your final goal is to dominate in any way possible. You can use diplomacy, conquer the competing countries, even start an independence war if the taxes you’re paying to your homeland become too much of a nuisance.

The premise is similar to a 4x game, but it plays quite differently. Basically, you start out with a ship, a small army and an explorer on the coast of an unexplored land. Your opponents do the same. You set out exploring, hoping you’ll find a good spot for a future colony. Once you explore enough, your homeland sends you a settler and you get to build your first town.

Your town collects resources, based on the buildings you have and where you’ve built them. Large, open areas are good for farms, the regions near mountains should contain gold and metal mines, while the wooded areas are perfect for logging. Of course, you also need to build up your commerce to collect goods and most importantly, provide living room for your citizens.

Eventually, you get to build more towns, conquer the towns of your enemies, cooperate with or destroy the indigenous population, basically anything that comes to mind in a 4x game. As I said, though, it’s only similar to a 4x game. 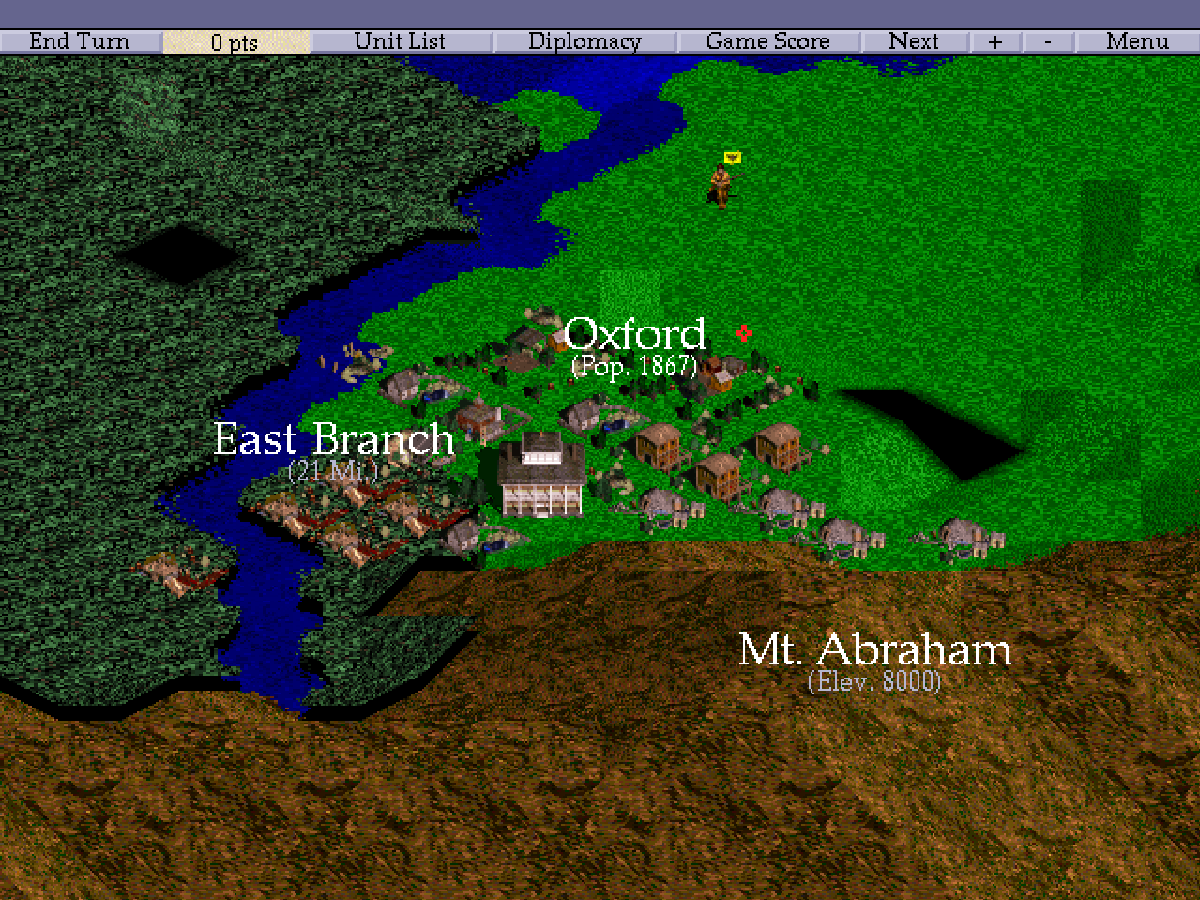 Pictured: A typical Conquest of the New World town, a bit later in the game

First of all, your cities are built more like Anno. The tiles themselves provide yields, but only in the form of how effective certain buildings are on certain tiles. Your population is important, but not as city size. Instead, it represents labor force. The more labor force you have, the more production buildings you can support at full capacity.

More importantly, while the game is turn based, the movement of units is not tile based. Instead, each unit has a certain distance it can travel over the map during your turn, which is portrayed as a bar that is slowly emptied as your unit moves. Explores and ships expend their movement slower than military units, of course. There are probably small tiles that play a role underneath the visuals, but to the player, the movement seems real time, to a degree.

Last but not least, the combat takes place on a separate screen, where you place your units in a grid with your enemy and then take turns moving and attacking. Some units can move further, some can attack from a distance; each has their own strength and weakness. 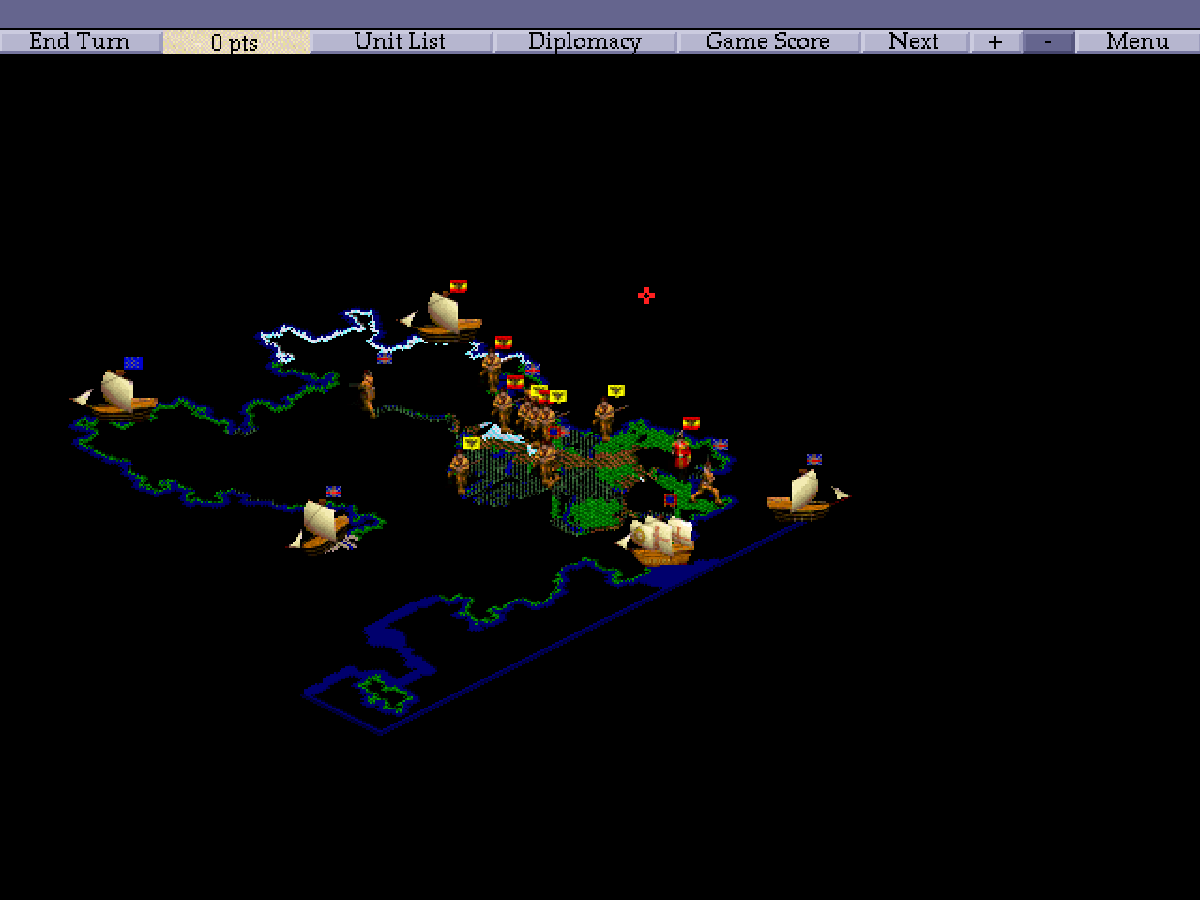 Pictured: A fully zoomed out map view later in the game. Some exploring was done, but mostly using ships, along the coast.

As for myself and my attempt to play, I started a custom game on the easy difficulty, built up my town and am now trying to figure out how to build another. I can’t remember if there’s some way to recruit a settler or if I have to do something else. What I did remember is that my town needed to have mountains, forests and plains in order to get all the required resources for development.

Also, the taxes I have to pay are starting to get a bit high. I’m nowhere near strong enough to throw a tea party, though.