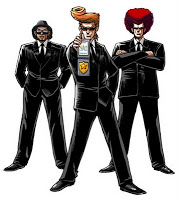 Two days ago, I had to go to Zagreb to do something which took 15 minutes. This means a total of 3 hours train ride for 15 minutes of work. It was early on the way there, so I was tired, but on the way back, I started the easy mode of this game and completed it in one go. I don’t think I will be trying this one on harder modes, because I don’t like the songs as much as in Elite Beat Agents. Still, this is one more for the completed list.