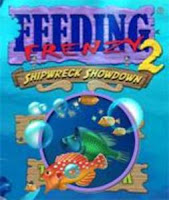 This is just your basic causal game from Popcap. Most people probably know of it, or have played a similar game. Basically, you are a fish that eats smaller fish, which makes you get bigger, which allows you to eat bigger fish that would otherwise eat you. There is about 60 levels and a loose story that you follow, but nothing important. Basically, you are after a strange sea creature that seems to leave destruction in its way. It turns out its some sort of alien fish which you end up eating, thus saving the world. Anyway, the game is pretty fun for a single walkthrough at fast to complete, so I guess I can add it to my list.