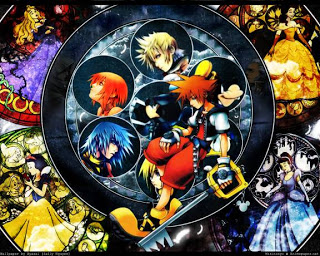 I made some progress today. First I went back to the Deep Jungle and cleared it completely. First I had to find some slides for Jane so she could show them to Tarzan, so he can, in turn, possibly say he saw one of the things on the slides in relation to Kairi or Rikku. It didn’t help, but Tarzan took us to his Gorilla pack and asked them to reveal their nest to us. They refused so we continued back to the three house. There, we’ve found Clayton trying to shoot one of the Gorillas so we stopped him. As we came back to the tent, Clayton got pissed and left, and the Heartless started attacking.
After clearing most of the areas of the Heartless, I came back to the cliffs where I Clayton attacked us, being controlled by the Heartless. It was a pretty tough boss battle and I had to use a few potions, but we managed to beat it. As a reward, I got the Cure spell and Tarzan took us to his home behind the waterfalls. We found another Keyhole there and unlocked it, which granted us another Gummi part. As I was leaving the Deep Jungle, Tarzan gave me a keychain which increased the reach and damage of my Keyblade.
First I went back to Traverse Town and explored it for a bit, but then I decided to go try and kill Cerberus again. With the cure spell and the new Keychain, as well as a few more levels, I killed him easily in one try. I guess this is how the game is supposed to be played. Most of the times you have several options on where to go next and nothing is stopping you to explore another option if you get stuck somewhere. Anyway, this is where I stopped playing and decided to continue tomorrow, so I guess that is what I will be doing.
All I managed to do today was to gain a few levels and complete the trial at the Coliseum. I tried defeating Cerberus a few times, but I failed. After that, I went to another world, this time the Deep Jungle, where I fought a cheetah and met Tarzan and Jane. There’s a lot of platforming in the jungle, which was very annoying, considering the controls of the game. All in all, I seem to be stuck. I will try my luck again tomorrow. 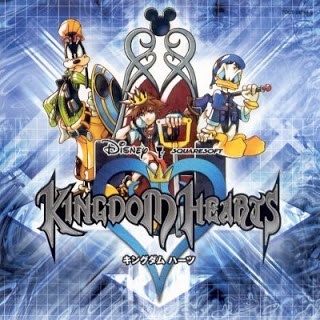 It was either this or Dark Cloud 2, but Kingdom Hearts seems to run better, so I chose it to be the next game I play. It really seems like a nice game if you ignore the Disney setting, so I’m having allot of fun for now.
The first hour or so, I’ve spent on the Destiny Islands with Sora’s friends, trying to build a raft to leave the place and explore “other worlds” as they say it. Pretty soon, though, the place was attacked and seemed to be destroyed by the Heartless, but not before I got the Keyblade.
Next, I’ve found myself in Traverse Town, where I was continued to be attacked by the Heartless. That’s where I met Cid, who is the owner of the Accessory Shop. After exploring Traverse Town and managing not to meet with Goofy and Donald, I was, in a way, rescued by Squall, or Leon, which is how he prefers to be called. He seems to be working with Yuffie and Aeris (I know it’s Aerith in this game, but I prefer Aeris). Leon explaind some stuff about the Heartless and the Keyblade to me, and then finally met with Donald and Goofy. We agreed to work together to save everyone and defeat the Heartless. We defeated a boss and then went to the next world – Wonderland.
In Wonderland, Alice was being tried for a crime the Heartless committed. I had to find some evidence to clear her, but even after I did, the stubborn queen refused to free here. Instead, she ordered her soldiers to attack and during the battle, Alice was taken by the Heartless. After that, I had to go to the next world – Olympus Coliseum.
I tried to enter, but they wouldn’t let me in. Instead, they allowed me to enter some trials that involved destroying a certain number of barrels in a certain amount of time. Even after I passed those trials, they wouldn’t let me in, so I was about to leave. Luckily, on the way out, Hades gave me a pass, so I could enter the contest. This is where I took a break.