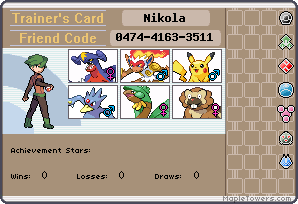 I went to all three lakes and fought Team Galactic commanders there. Afterwards, I had to follow them to the Galactic HQ and defeat the boss there. For defeating him, he gave me a Master Ball. I followed him to Mt. Coronet, where he opened a portal to another world. In there, I fought Giratina. I reloaded my game several times to try and catch it with a Dusk Ball, but after about 40 of them wasted, I decided to use my Master Ball. He was doing way to much damage to me and I didn’t have a paralyze attack, so I saw no other choice. Anyway, now I have a Giratina, but I’m not using it in my main team. I want to win the game without legendary Pokèmon.

Also, somewhere along the way, I won the seventh gym badge and my Pichu evolved to Pikachu. He is now around level 40. 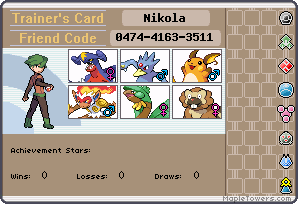 Today, I continued on to win the eight gym master. Thanks to Garchomp and his Earthquake move, the electric type gym was the easiest yet. Afterwards, I got HM7 Waterfall and continued to Victory Road and the Pokèmon league. After defeating my rival for the last time (I hope) I continued to fight the elite four and in the end, Cynthia. The elite four where easy, but Cynthia took a few tries to defeat. After defeating Cynthia, my name was put in the Hall of Fame list and the credits started rolling.

So I loaded the game after the credits and started in my room again. My rival said that I need to get on a ship in Snowpoint City so I guess that’s what I’m going to try next. 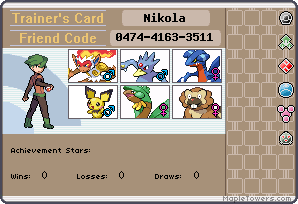 I got the sixth gym badge which means I can now use Strength outside of battle. I also got a new egg, but it didn’t hatch yet. I also got a Pichu as a fourth team member. I’m trying to raise his friendship in order for him to evolve in Pikachu. I don’t want to train it until he evolves, so he’s pretty much useless right now. I also caught a Tropius in order to use him as a HM slave. He can learn most of the HM moves, but since 4 is the limit, I’m also using a BIbarel for the same thing. 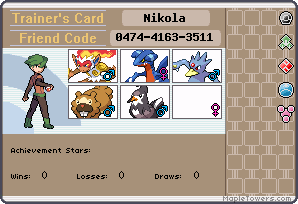 I got my fifth gym badge today. It was a bit tough, because the gym leader used water Pokèmon and I only had Infernape with a grass TM move to fight them. He did get allot of levels out of it, so it ended well. I leveled my Psyduck to 33, which made him evolve to Golduck. Now my team is pretty strong, but its only 3 Pokèmon, so I need to find a fourth one that can handle the weaknesses of the current 3. I have 2 other Pokèmon in my team, but they are only used for HM moves. Also, I finally got my Pal Pad, so if anyone reads this and actually plays this game (the odds are slim), add me to their friends roster, please! 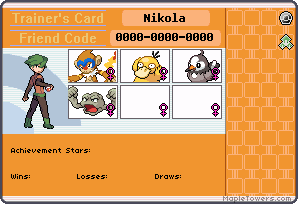 It’s been a while since I played Diamond, so I decided to restart (again) with this version. It’s basically the same thing with a few minor changes and features added. I’ve earned my first gym badge and freed the little girl’s father at the Valley Windworks. I would have caught the balloon pokèmon, but it’s Saturday, so he wasn’t there. I did put some honey on two trees though, so I hope I will catch something there tomorrow.

EDIT: I played some more and got to Eterna City where I defeated the gym leader. This got me another badge and the ability to use Cut outside of battle. Tomorrow, I’ll try to catch a ghost pokèmon in the Eterna Forest mansion.