Played a bit of single player Sanctum today. I finished mine on day one, so I tried some mazes on the bridge map. The diagonal design was definitely the most efficient one out of those I tried. It gives good coverage, the penetrating turrets can still shoot in a line, and the bends are so plentiful that the fast mobs are pretty much just fodder. Of course, this means I completed that level. I also got an achievement or two. As for playing with friends, I wanted to do it tonight, but Steam decided it needs to redownload the entire game, so this means 3-4 hours away from it on my connection. 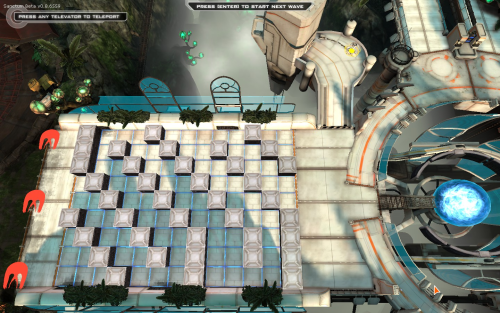 This is the optimal layout for the bridge map, courtesy of Google Search.

I bought the Indie Royale pack and, luckily, this fun game was in it. In my opinion, if you’re paying the minimum, the royale is well worth it even for this game, even if you don’t have people to play with. If you do, then it’s definitely worth it.

It’s a tower defense game, but in 3D and played from the first person perspective. You can play with a couple of people in coop and all you really do is defend a level from X number of monster waves, buy buying and placing towers and also by shooting them with your weapons. I idea itself is nothing revolutionary, but the way it’s executed is what makes it fun. You can shoot your own weapons, so you’re part of the action even after you’re done with building. There’s plenty of towers and you build your own “decks” out of them, so you also need to plan ahead right from the start. When you add friends to it, it becomes a frantic game of planning, building and team shooting. Now, I did have some issues with lag when my friend hosted the game, but when I was hosting, it was going pretty smooth for both me and him, so that might be a network problem on his side. Other than that, I’ve seen no issues with it. You shouldn’t expect any story or anything immersive like that, but you can expect a nice, fun single or multiplayer experience.

In any case, I played a couple of games with a friend and we realized we both suck. We couldn’t win any game on medium, so we had to dial it down to easy to win one. Maybe it’s cause we really don’t know the enemies or the towers yet, and we keep forgetting to check the encyclopedia. We had fun anyway.