There was an extremely apparent lack of posting (again) recently, but I won’t apologize for that anymore, nor will I make any promises of it not happening again. It is what it is. Sometimes I feel like writing something, sometimes I don’t. Anyway, what is Legend of Grimrock? 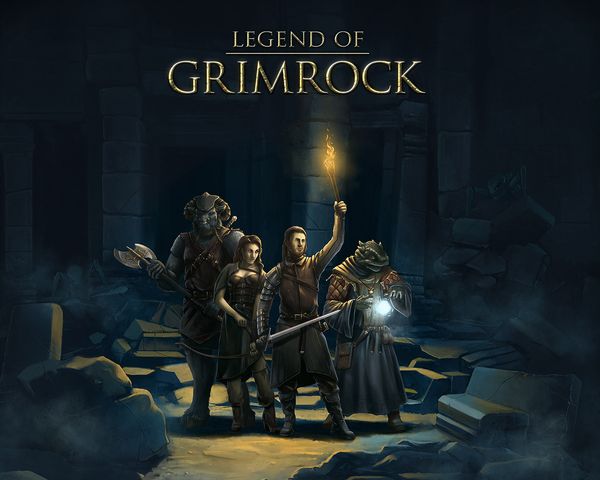 Any CRPG fan needs to play Legend of Grimrock

It’s an awesome game! This really needs to be said. If you knew about this game before release; if you knew what it was, you will not be disappointed one bit. The game supplies exactly what it promised – an old school first person dungeon crawler in the style of the Eye of the Beholder series.

You start the game as you would expect. You can use a premade party, or you can, as an experienced dungeon crawler, make your own. You have a pick of 4 races (human, minotaur, lizardman and insectoid) and 3 classes (fighter, mage, rogue). Each race provides different starting attributes and a few unique feats, while the choice of class gives you access to different set of skills you can train in. Once you distribute extra attribute and skill points, select your feats and name your characters, the game begins. You start in a dark room, with a torch in front of you and with no possessions whatsoever. There’s a short slideshow “tutorial” in the game menu, but that’s it. There’s no one there to hold your hand, no one there to tell you “push up to move” or anything of the sort.

This isn’t bad game design, though. This is proper game design (and I’m not hearing anything else, la la la la). You aren’t left completely clueless. You move around the room, trying out keys and examining your surroundings. If you look close enough, you might even spot a hidden switch, giving you access to some extra items. What you definitely will spot are iron bars stopping you from moving on, a torch on the wall next to them and some runes on the opposite wall. You step there, look at the runes, try to use your mouse buttons and suddenly you are told that the torch is important. Alternatively, you click on the torch first and you don’t have to read the runes anymore. You take the torch, it’s suddenly dark and the gate opens. What now? Sure, you can go on, but now things are dark. If you don’t have a serious mental defect (apologies to those that do, it’s not your fault), you pretty soon realize you can put the torch back in the wall, or, if you’re especially smart, that you can even put it into one of character’s hands. Let there be light!

This is how the design works pretty much throughout the game. When you encounter a new concept, the game slows down for a bit, provides you with some hints and gives you the chance to discover the concept for yourself. It doesn’t tell you “use this to do this”. It gives you the tools and lets you figure it out. That’s how a game should be designed.

There’s combat in Legend of Grimrock to, of course. If you’re familiar with Eye of the Beholder, it will feel natural, but if you are more of a Wizardry type of player, you might get badly hurt. You see, while it appears completely tactical and turn based at first, it really isn’t. You are supposed to use your skills, as a player, as well as tactics, to avoid getting hurt. You hit your opponent, and then it takes a while before you are able to attack again. While this is happening, the opponent is free to hit you. That is, he is free to do it if you let him. If you move away from him, he has to go after you, but while he’s doing that, he isn’t hitting you. So you attack and move back for a bit, until you get him into an open room, and then he’s yours. Attack, step to the side, turn around, attack, step to the side, turn around, etc. If you’re good enough, he will never touch you. Of course, this is a bit harder if you fight more than one enemy at a time, so you also need to be strategic and try to split the group up. You can also use your environment to your advantage. You can close a gate to split up a group of enemies, or lure one onto a collapsing floor tile, to take him out of battle completely. Of course, if you do that, he will be waiting for you on the level below, so be sure you aren’t actually making it harder for yourself. Some people might say this dancing around the enemy is actually an exploit, but this people haven’t tried to do it differently. If you stand still and just fight it out, you simply won’t survive for long. Even a single stronger enemy will destroy your party on any difficulty.

Let’s discuss equipment to. There is no money in the game, no vendors. You use what you find and nothing else. What you do find can be just regular leather and steel, or it could be a bit more powerful. There is nothing overpowered, though. The game won’t at any point feel like a breeze. Of course, the more powerful items will only be rewarded to those who explore and take time to solve the more difficult puzzles. There’s also a time constraint. While you could play in the dark, it would not be as easy or as enjoyable, so you need to conserve that limited number of torches. This means you can’t just wait around for too long and must keep pushing forward to new areas. Also, your characters need to eat, and not all enemies drop food. There are a couple of points in the game where food dropping enemies respawn, though, so this isn’t as big of an issue. You just can’t overstock on it, since the total weight of the items you can carry is limited.

Magic is another thing that’s handled a bit differently in the game. You cast magic by activating one several runes on a 3×3 board. A certain combination casts a certain spell. You learn new combinations by finding scrolls, but nothing is stopping you from experimenting by yourself and finding new spells that way. As long as your skills are high enough, you can cast any spell you can remember, regardless of finding the correct scroll or not. This makes concurrent games a bit easier, but not by much, since none of the spells are too overpowered and you can’t really use the stronger ones until you level your mage anyway.

The music in the game is limited to a single theme composition. It a nice, memorable, orchestral theme , but there’s nothing else (or there is, but I just can’t remember it). The sounds are atmospheric and fit the theme nicely. The various clicks and clunks of buttons, switches and levers sound great and immerse you in the game. The graphics really make the game shine, with hard shadows and great lighting effects. The dungeon can appear a bit monotone in some places, since you are looking at rock most of the time, but every few levels, the theme shifts, giving you a nice change of pace. The monsters look detailed and imposing, so I can’t complain about anything there.

The replayability could also be pretty big. You most likely won’t find all the secrets on your first playthrough, and if you’re anything like me, you will jump for a second run as soon as you see the first “You win!” screen. Additionally, you can try your luck with a different party flavor, if that’s something you might like. We also can0t forget that the development team intends to add future expansions as well as mod tools so users can create their own dungeons. Once that happens, there will really be no limit to the amount of gameplay this game will provide, as long as the fan base stays big enough.

All in all, Legend of Grimrock is an awesome game and any fan of older dungeon crawlers will absolutely love it. As for the new players – give it a chance. Games like this are rare these days and they deserve our attention. Also, if you get stuck on a puzzle, don’t run for a walkthrough. It will feel so much better if you figure it out yourself.