I’ve played in extremely short sessions over the past week, so I decided to do another summary instead of spreading it over a bunch of short reports. 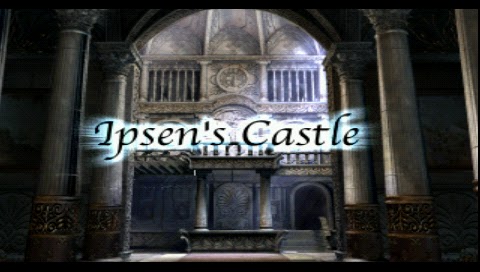 Ipsen’s Castle reminds me of Castlevania.

Ipsen’s castle was cleared without much difficulty, apart from the mechanic which is only on issue to figure out on your first play through. You see, Ipsen’s Castle handles weapons in a very special way. The weapons each character starts with do the most damage here, and the stronger your weapon gets in the rest of the game, the weaker it is in the castle.

Since I remembered this mechanic very well from my play through as a kid, I kept all of my weapons from the start. In fact, at this point, I’m pretty sure I haven’t sold any piece of equipment yet. The regular route a player usually takes is to gradually pick up all the starter weapons within the castle, but for me, there was very little difficulty right from the start.

So I cleared the castle and found the instructions on how to get to Terra. There were four shrines in Gaia, each protected by a guardian from Terra. I had to split my party into four teams of two and defeat all the guardians at the same time. This was actually completely automatic. I had no control over party division and I only had to fight one battle, against the earth guardian, with Zidane and Quina. Thanks to Auto-Float, the guardian’s strongest attack couldn’t hurt me, so the fight was a breeze. 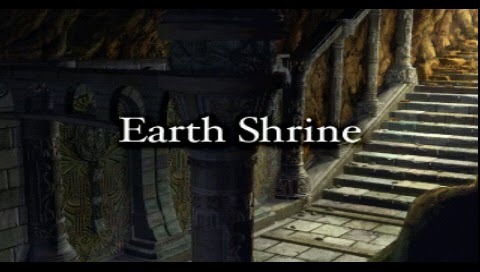 As usual, Zidane got stuck with Quina.

After this, I took a bit of a detour and decided to get some items and blue magics before going to Terra, since the world will be changing when I come back. I’ve spent maybe an hour or two in total, training, learning blue spells and just exploring the world, before finally going to Terra.

Terra is basically the final area before the final area. There isn’t much to do there, but the story really takes a jump at this point. It’s revealed that Terra was destroyed and now an android made by the Terrans, Garland, wants to basically destroy Gaia to restore Terra. It’s also revealed that Zidane is one of the Genomes, which are basically advanced versions of the Black Mages, created by Garland instead of Kuja. Kuja is one to, but he rebelled and is now trying to defeat Garland and take over.

All of these revelations are followed by a short section where Zidane finally gets to act like a typical Final Fantasy protagonist – overly emotional, depressed and socially inept. It only lasts for a short while, though and then Zidane is back to his old, awesome self. Not to forget, the whole thing is accompanied by one of the best pieces of music in the series – You Are Not Alone. 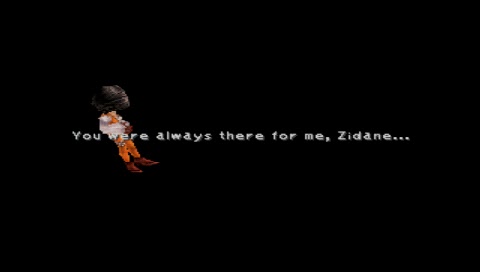 You are not alone…

This was then followed by a short trek through a dungeon, where I actually missed a few items because I didn’t feel like backtracking. Finally, I got to the moogle and saved, because three boss battles with no breaks in between followed.

Apparently, I’m really, REALLY overpowered, because none of the battles even made a dent in me. The silver dragon was first and Zidane didn’t even manage to steal all of his items, even though Steiner was the only one attacking. Steiner, thanks to his Ragnarok, is actually doing 9999 points of damage with his Shock skill. There really is no need for anyone else to attack with those numbers. Garland was next and he fell just as fast, followed by Kuja. The fight against Kuja was one of those unwinnable fights JRPGs love to throw at you, but before the “I’m so strong I’m gonna knock all of you out with one move” sequence, he didn’t give me any trouble either. 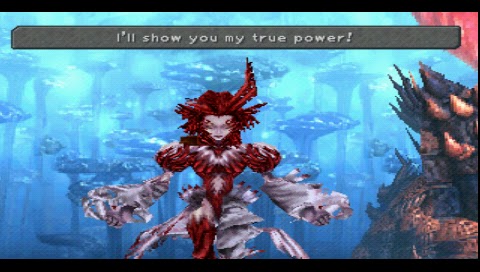 Kuja just has too much ego.

Finally it was over, I got the airship Invincible and I got back to Gaia, with the Genomes on board. They get dropped off at the black mage village, what with being related and all, and I was now ready to get to the final area and complete the game.

Well, I could do that, or I could get all the ultimate gear, skills, etc.