I’ve been playing through the Might and Magic series for a while now and I enjoyed every game I tried. In fact, I enjoyed them so much, I unofficially decided to play through as many of them as I can. I already got through the first five games of the main franchise, so now, before the major change to the style Might and Magic VI brings, I thought it would be a good time to give the Heroes offshoot a try. Technically, I should probably start with the original King’s Bounty, since that’s what inspired Heroes, but there’s just so much to go through already.

The thing is, old games are rarely amazingly designed. With an RPG like the main series of this franchise is, you can get over that. You take bad design as part of the challenge and it feels great to overcome it.

With a strategy game, not so much.

But let’s not get ahead of ourselves. Let’s see what the game is all about. 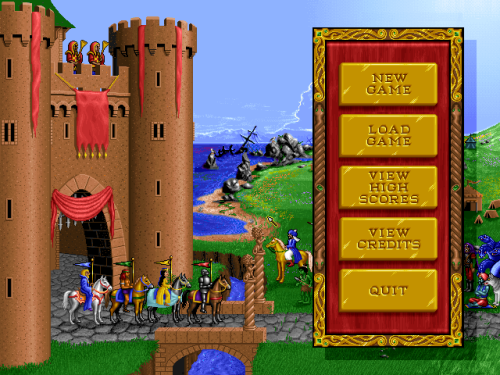 Pictured: Hero Selection for the Campaign of Heroes of Might and Magic

And so it begins… 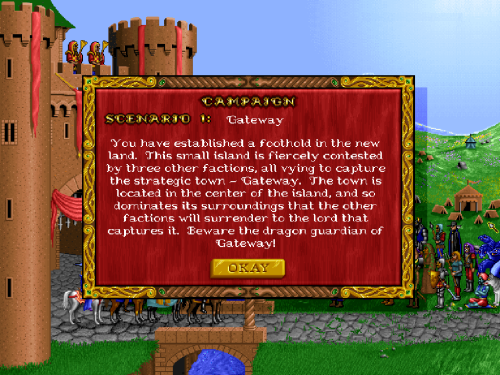 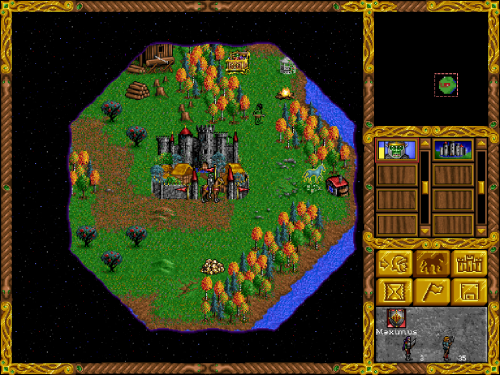 Pictured: The actual start of the game.

I actually suck at Heroes of Might and Magic.

I’m also one of those people who got introduced to the franchise a bit late, so the fourth game is my favorite. Yes, I know, feel free to hate me. I just never played the third game during it’s peak, and never got into it later.

In any case, I’ll give this a fair try, but there’s a good chance I won’t be able to complete the entire campaign.

I’m smart enough to know that it’s a good idea to start a mission with as many troops as possible. Since I’m able to build the archery range, I do just that and recruit 8 additional archers, as well as 12 additional peasants. Then, it’s off to explore. 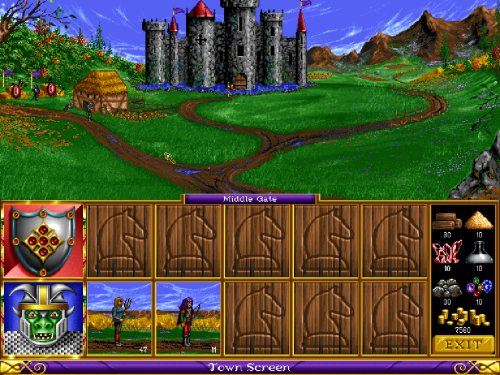 Pictured: The town screen in the early game.

For those unfamiliar with the game, Heroes is a turn based strategy game where you use heroes as army commanders to move troops around and explore the map. You capture towns, where you build buildings that provide more troops every week as well as other advantages such as spells, improved morale or scouting. Building one building can block you from building another, so there’s a degree of strategy there. That’s the case in the future games, at least. Heroes 1 doesn’t seem to have that rule.

In any case, I do the initial stuff, visit some stuff on the map, gain some gold and some extra peasants and pretty soon fight my first battle against some goblins. You get a screenshot of that and from this point on, I’m stingy with the screenshots because I want to play the damn game.

That’s right. I’m writing this as I play. 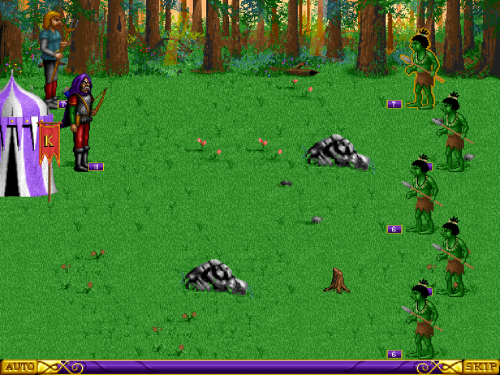 Pictured: The battle screen and the first battle of the game.

In short, Mission one did not go well. Maximus, my initial hero, got his ass handed to him soon after the screenshot above. I lost all of my troops and recruited another hero, but that one got killed by the enemy soon after, so I had to restart the game.

On my second try, I was smarter and immediately recruited an extra hero, which also comes with some extra troops. Then I used my first hero to clean up the local sealed off area before going towards the center, which was guarded by dragons.

After that initial hurdle, the rest of the game consistent of slowly building up my forces, all the while fighting off weak enemy heroes who kept suicide themselves against my growing army. Once I was able to split my army into two, I moved forward and started conquering the enemy cities. Eventually, all that was lest was the neutral town in the center.

Since there was no rush, I explored the entire map and even dug up an artifact.

I did not know this was a feature all the way from the first game, but you get to find map pieces in each mission. Revealing each piece reveals part of your treasure map and eventually, you can see the location of an artifact clearly marked. Of course, if you’re observant enough you can try and figure out where to dig even before you find the entire map, but since digging takes the whole day (meaning the whole turn), that usually isn’t the smartest thing to do. 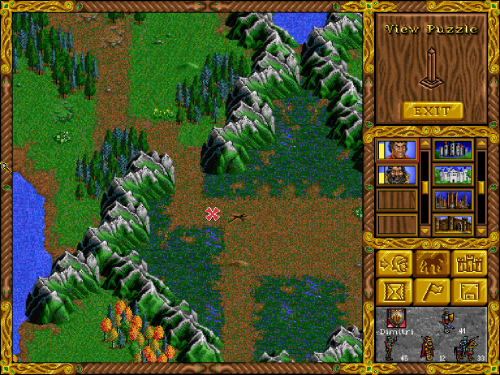 Once I got all I could, I attacked the now poorly defended neutral town in the center, and that was it – mission complete. 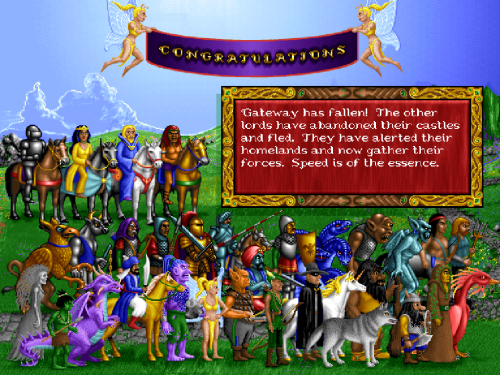 Pictured: The not at all serious victory screen.

It was off to mission two.

Unfortunately, that means everything restarts. I lose my heroes, my treasure, nothing remains. The campaign in the first Heroes of Might and magic game is really a series of independent scenarios loosely tied together by a relatively simple story.

I’ll say just one thing. The concept of balancing wasn’t really a concept back when this game was released. 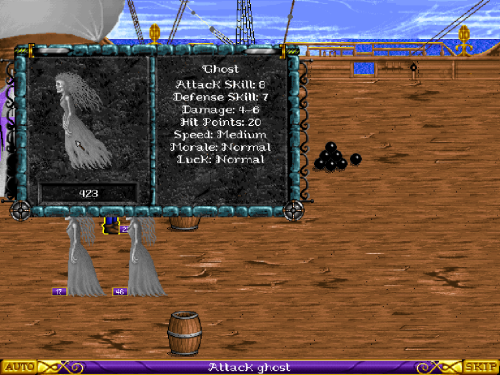 Pictured: A stack of ghosts.

That’s a stack of over 400 ghosts. They started out as a stack of a dozen ghosts. Then they got hold of my peasants. In later games, ghosts still drain life with their attacks and replenish their stack, but at least it’s hit point based, not literally life based. Each puny peasant they killed added an additional unit to their stack. It was a slaughter and my largest army was devastated.

That didn’t kill me though. I managed to push through the loss anyway.

The Archipelago is a level set an a bunch of islands, so ships were suddenly a big deal, moving away from the first mission, where I wasn’t allowed to have ships.

Having ships involved meant the mission would take ages to complete. It’s just the nature of how things are set up. When you enter or leave a ship, you lose your entire turn. If you spread your forces too thinly, the enemy can easily defend himself and if you focus them in just a couple of armies, you end up not being able to defend your own captured holdings. It’s not that you’re actually losing at any point, it’s just that advancement becomes slow. No matter how well you do, the enemy somehow squeezes a tiny army through, capturing an undefended town and forcing you to spend turns retaking it.

Eventually, though, I did win. It just didn’t feel like an accomplishment. IT was more like “Finally, I’m done!”.

The one were I decided to give up.

In the third scenario, you’re stuck on a continental map without a sea surrounding it. 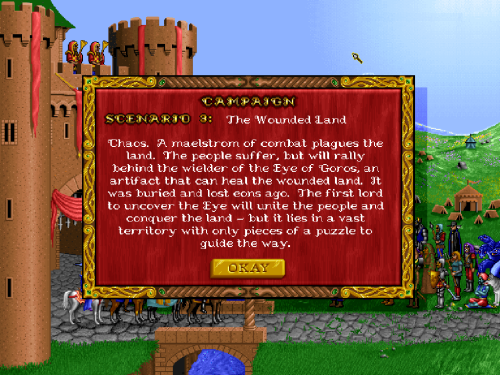 Pictured: The description for Scenario 3.

There are four regions, one in each corner, separated from each other via mountains with passes guarded by neutral monsters. There’s also the central region, where the big conflicts are expected to happen.

The goal of this map is not to defeat the enemy, or to conquer any one location, or anything of the sort.

The goal is to find an artifact called The Eye of Goros, which is a throwback to the first Might and Magic game, if I remember correctly, where The Eye was used to reveal Sheltem’s true form.

And this is a problem.

It’s a regular game artifact, meaning you’re supposed to visit obelisks to find maps and then dig for it. The enemy can do it to, so there’s no inherent difficulty level here. If you’re lucky, you’ll find the right obelisks first and figure out where the artifact is. If you’re not, the enemy will do it, or even outright guess it, so you’ll end up losing even though you may have have been winning the entire game up to this point.

And that’s exactly what happened, after hours of playing. 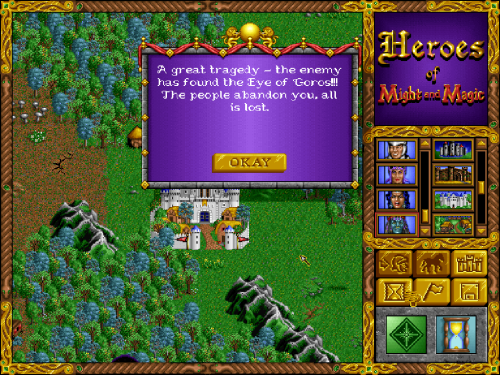 Pictured: The enemy has found the Eye of Goros. I could obviously retake it, considering my position, but that doesn’t matter.

I can now go back an hour, hope it’s better next time, or I can even try to guess the general area of the artifact is based on the maps I have and save-scum to find it. It’s not really strategy and it’s not really fun.

So here I am, a couple of days after this loss happened, and I find myself not really looking forward to playing the game further. I’m busy. There are other games I want to play to.

It’s not all bad

Heroes of Might and Magic is not an outright bad game. I can imagine it was considered a pretty great game at the time of release. It’s still pretty great.

Modern games just do some things better. They know how to avoid the cheap, annoying stuff. They go too far sometimes, and make the game so easy it plays itself, but a lot of them do know how to differentiate between a good challenge and a cheap trick. Not all, mind you. Many still manage to get it wrong.

In any case, I got to play the very first Heroes of Might and Magic game, and I played it for at least half a dozen hours. I’m not angry about the time I spent, even though I won’t complete it. It was an experience that was worth the time. I just don’t have enough time to push through the unfun stuff when there are so many games around that make the fun stuff more easily accessible.