I was tricked! There is no other way to say it. Heroes of Annihilated Empires was a game I played for a bit years ago and kept thinking about playing again ever since. It had this original and rarely used theme that I really wanted to explore fully.

Now, years later, I can honestly say I was completely wrong. It did not have this theme. It only looked like it did.

More than half a dozen years ago…

I can’t say for sure, but considering Heroes of Annihilated Empires was released in 2006, and that was still well into the age of piracy for me, I can pretty confidently guess I gave this game a shot as soon as it was released.

The intro starts in an epic fashion, with an elven civilization fighting off an army of the undead. That’s the intro I watched back then, mind you. None of the videos in the version I bought off of GOG.com are willing to play on my machine, so I’m speaking purely from memory (and YouTube). It looks cool and all, but it’s nothing remarkable or unseen. What is remarkable and what piqued my interest in the first place was what happens after the battle.

There’s a lone skeletal warrior wandering around the battlefield. There’s a portal opening behind him, a noise, followed by a strange metallic sound and then a click of electric lights turning on and illuminating the skeleton. I won’t try to maintain the mystery. It freaking sounds like a tank rolled out of the portal and turned on headlights!

I can’t find a great video on YouTube, but this one shows the intro to Heroes of Annihilated Empires, so it should show you what I’m talking about.

Back then, I watched that video several times and played through the first mission or two. I may have even been playing a demo, for all I can remember. I’m pretty sure there was a part in one of the missions I played, where an actual, moving, in-game tank was fighting off a horde of rats or goblins or something.

Heck, even the trailer for the game was giving hints of aerial combat with actual, modern airplanes in a fantasy world. It’s all the way at the end of the trailer, and it’s short, but it hints at it.

I bought the game on GOG.com because it was heavily discounted and I got the itch.

I installed it, but couldn’t watch the intro because the videos don’t play on my machine.

It’s hard. Really hard. And not in a good way.

It’s just isn’t really explained to you what you’re supposed to do. Civilians are running away from the undead and Elhant, the hero and protagonist of the game, is supposed to save them. It’s pretty easy for a while. Eventually, you get to advance through the level close enough to the origination point of the undead that something triggers. At that time, Elhant dismisses his entire army for story reasons and orders them to retreat as well.. The problem with that is, the undead are still advancing, there are still plenty of civilians on the map and they move more slowly than the undead. There’s really very little that can be done if the trigger happens at the wrong moment and more often than not, it’s the wrong moment. 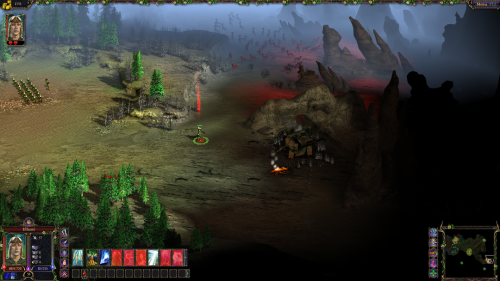 Pictured: Elhand about to tackle some hell hounds.

Luckily, that’s just the first mission and I don’t give up that quickly.

The rest of the game is easy

Well, not all of it is easy, but all of it absolutely is easier than the first mission.

There are a few cases where the enemy troops can overwhelm the home base which triggers a defeat because some important character died or a building got destroyed. In all other cases, you can easily rely on the extremely poor enemy AI to get ahead and eventually win a mission.

The AI is just bad

Elhand is a ranger, so he has access to ranged attacks. Equipping a melee weapon also makes him a formidable melee attacker, but for most of the game, due to the bad AI, ranged is the way to go.

All it takes to beat the AI is to stand at max range and start shooting. Once the enemy gets close enough, the player can run away for a bit and the enemy will soon give up the chase and go back to where it started. Even better, if Elhand continues shooting at that point, the enemy will ignore the damage and keep slowly retreating. Only once it reaches the starting point will it charge again. 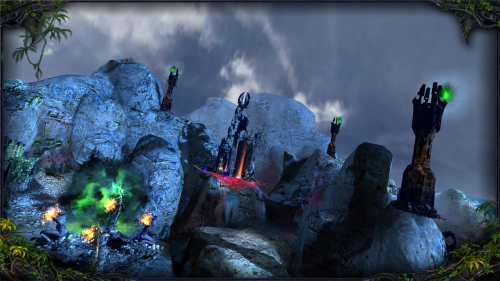 In some rare cases, the AI even goes more bananas than what I just described. It will sometimes just stand in place and ignore all attack completely. At times, it will wander randomly, as if the path finding algorithm couldn’t find a path to the troops attaching him. At other times, it will keep moving towards Elhand, but won’t attack at all when it reaches him, opting to persist at trying to move into the space Elhand occupies, pushing him backwards.

With that and smart selection of level-up upgrades (range, damage, movement and attack speed), the game just becomes a chore to get through past the first mission. A fun chore, to be fair, but ultimately challengeless.

The story gets weird

Elhand is kind of a douche sometimes. He can get pretty sexist to.

I remember there was an instance where he was admiring Lana, another character and playable hero (at moments) in the game. He was saying how she’s “beautiful and a pretty decent warrior. She could never match a male warrior, being a woman, but still, good effort”.

Other characters can get weird, so maybe it was on purpose. I don’t know. All I know is it gets weird.

How was I tricked?

That’s the question, really, isn’t it?

In case you haven’t figured out, I bought the game because I remember loving the idea of real-world military troops fighting it off against fantasy races.

There is none of that in Heroes of Annihilated Empires. 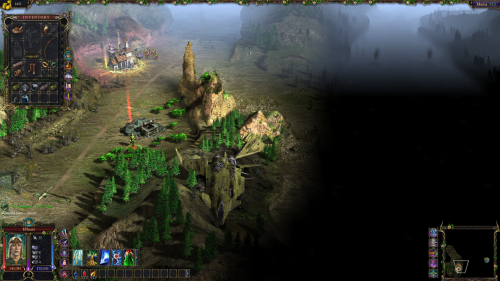 Pictured: One of the many hints of the theme I was excited about. A crashed airplane.

On almost every map, there’s an unexplained shot down airplane or a destroyed thank. You keep encountering them, from beginning to end. They never get acknowledged by in-game characters though, and nothing ever comes out of it.

I kept playing through all 15 or 16 campaign levels and got nothing out of that theme I was so looking forward to. The game just ended.

What’s worse, since videos don’t play for me, when the final level was done, I just got thrown to the credits screen like nothing happened.

So what did happen?

My best guess is, since Heroes of Annihilated Empires was originally supposed to be a trilogy, the actual real-life armies were supposed to come in at a later time. Since we never got the other two games in the trilogy, I guess this is it.

The AI sucks, the maps aren’t amazingly designed, there are bugs and annoyances, but overall, Heroes of Annihilated Empires offered a fun mix of RTS and RPG that I ended up enjoying, even though the game made a fool out of me.