As I said, I’ll try to make each report about Icewind Dale focused around a single larger area. I’m not sure if this will be possible, but I’ll do my best. This time, it’s the Temple of the Forgotten God.

As soon as I entered, I ran into a verbeeg called Red Toe, who was running from bad priests that took over the temple. Now, I consider myself relatively familiar with fantastic creatures, but I have no idea what a verbeeg is. According to Google, they are a sub-type of giants most similar in appearance to humans. You learn something new every day. 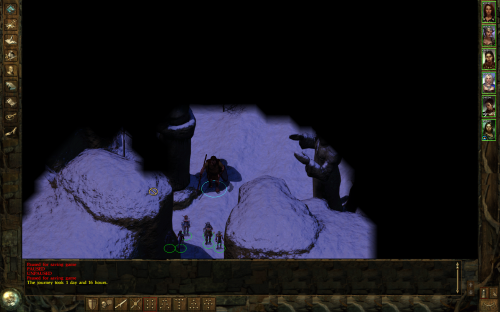 As soon as you enter the area, the giant comes charging in.

This time, there was no overworld area to explore first – the entrance to the temple was immediately north. This usually means one thing – Rax, the party’s rogue is going to get busy. Of course, scripted events usually put an end to my stealthy approach, and one of them was placed right at the entrance hall – an acolyte decided we’ve caused trouble here before (we didn’t) and attacked with his two verbeeg guards. Verbeegs hit by a lot, so there will be plenty of resting in the temple, it seems. 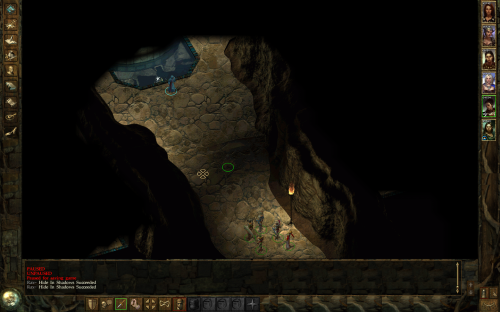 There might be a way to spare the acolyte, but I didn’t find it.

The entire first level was really mostly uneventful, aside from this first Acolyte I was able to pointlessly talk to. The rest of the level was just a lot of resting and giant slaying. All of the verbeegs carry halberds, which is probably the main reason they hit so hard. Fighting more than one at a time means trouble and when you have three, you need to really be managing your characters if you want all of them to survive.

The  second level seemed like more of the same. A big part was a huge room with adjacent smaller rooms. Each of these rooms contained sometimes a trap, sometimes an enemy and always a chest with something in it. 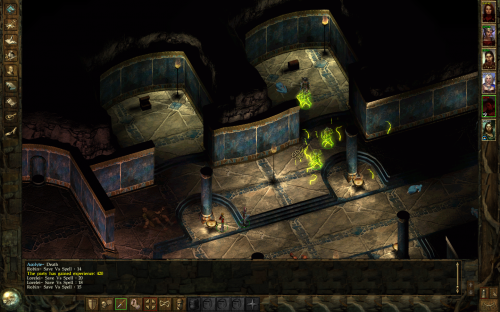 This area with adjacent rooms is the biggest part of the second level.

The side rooms were easy to clear, but the far side of the large room was pure hell. It contained several giants and acolytes, all too close to each other for me to lure then one at a time.

Luckily, I did my homework. A bless cast by Alana and a Haste from Aleen, both cast before the fight, followed by a quick Prayer as soon as the fight started was more than enough for me to kill everything before I even got hit. That’s the fun part about magic in Dungeons and Dragons – it seems insignificant when you read the descriptions, but in practice, it works amazingly well. 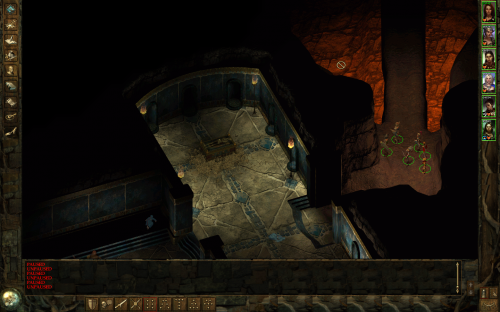 The group was guarding the way into some fiery caverns. Before entering, I decided to rest without saving. I was rewarded with an ambush where Priscilla died and I had to reload to the point before the big battle. Luckily, I knew how to beat it, so it wasn’t a huge deal.

In a twist, the fiery cavern was empty of life, though there was plenty of corpses. There was also an altar, of which the game told me that something was obviously removed from it. My journal got updated, meaning I now had to go back. 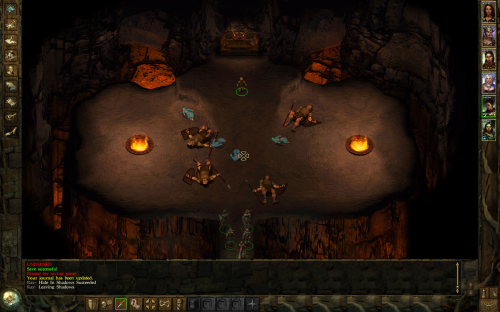 My instincts were correct – it IS fiery!

The journal told me I had to speak to Arundel and also mentioned that one of the dead bodies carried the robes of a priest of Talona. I guess this is one of those things the Dungeon Master tells you during a session, because I sure as  hell don’t recognize specific priest robes. I can’t even tell the difference between catholic and orthodox robes, for the most part (well, I think I’d be able to guess, but I’m not an expert).

I brought a vial of liquid I found in the Heartstone cave to Arundel and he told me it’s snake venom. Since that sort of thing quickly loses potency, it was acquired somewhere in the area, and the only place reptiles could live nearby is the Dragon’s Eye – a maze of volcanic caverns. I knew those fire protection scrolls would be useful. 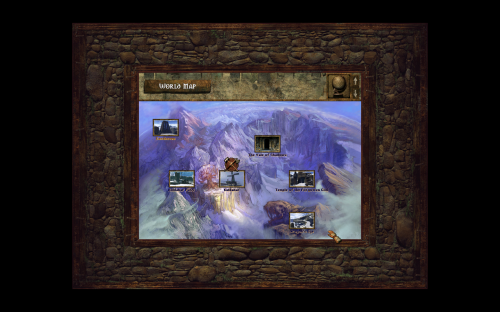 Traveling time to Dragon’s Eye is 72 hours, which is difficult to imagine.

Before leaving for Dragon’s Eye, I did some more buying and selling, mostly selling. I got up to 25.000 gold, exited to the world map and clicked the location of Dragon’s Eye. This started Chapter 2.

I’d love to tell you how far I am into the game hours-wise, but I forgot to keep track, as usual.