It’s been two weeks since I last played Icewind Dale, so this report will be about me trying to remember where I was at. It will also be about Chapter V, of course.

The outside had ice and snow trolls accompanied by a couple of yetis and an especially strong ettin. I expected it to be a small transitional area, but it was actually quite big, with several exit options. 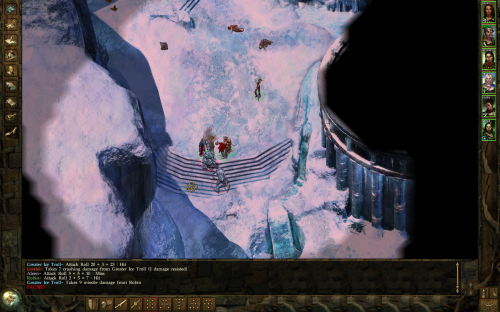 Icy outdoor area at the start of Chapter V

Ice trolls are easy to kill and do not need fire or acid to finish off, but snow trolls did have this requirement, so I was careful not to use too many of Robin’s fire arrows on them. I noticed that for some reason, some enemies were giving more experience than they used to, and pretty much everything was dropping gems. At first, I thought the gems were dropped only on trolls, but an occasional yeti had them to.

I did my usual routine of mapping and killing everything, followed by a peek at each of the possible entry points, in order to see which one takes me further and which are just side areas. There were two doors and the lower one seemed secondary.

As I got in, I noticed a door with a special lock, meaning I needed a key, as well as two doors leading to other areas.  Instead of going back to the other door in the outdoor area, I decided to just go with it and it turns out I was right.

The two doors led to a back room which had a bunch of slaves who escaped from a group of frost salamanders. In order to leave this place, they needed a key from the leader, so I got a new quest. 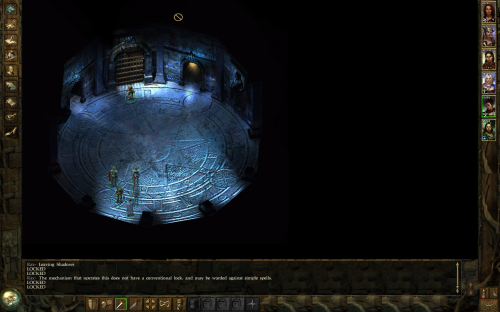 The back room through the two doors is where the escaped slaves are.

In a sort of twist, the frost salamanders were willing to talk and even gave me the key after I said I would handle the slaves appropriately. Of course, this was  a trick to free the slaves. There’s the option to kill them instead, but I have a party of good guys, so I didn’t even consider to do it.

I had to fight off some snow trolls and salamanders in the end, but completing this quest gave me a shortcut to the surface and back to the world map. I was also able to go to the next area immediately, but first, I wanted to clear the frost salamander area if I could.

This turned out to be a very good idea. I wasn’t able to save at the aquatic museum where the salamanders had their lair, but with a couple of quick exits to rest, I was able to clear the whole thing, kill the leader for his loot and even find one of the slaves, Vera, alive and kicking. Telling her what happened gave me another 80.000 experience in addition to the 60.000 I got for freeing the slaves. 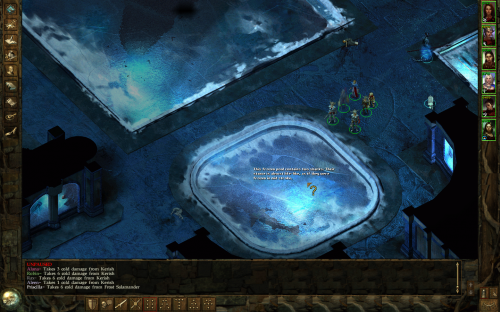 The aquatic museum has some excellent visuals.

Part IV – Back to Town

Before leaving for the next chapter, I went back to town to clear empty my bags and hopefully, buy something. The first thing was easy to do, but unfortunately, there was nothing new to buy and I already bought everything of old I was interested in.

I can’t be sad about it, though. Selling all the stuff I collected lifted me from the lowish 30.000 gold to the high 70-s, so if there ever is a restock on equipment, I’ll be very, very happy.

With all that, I was ready for Chapter VI – Lower Dorn’s Deep. 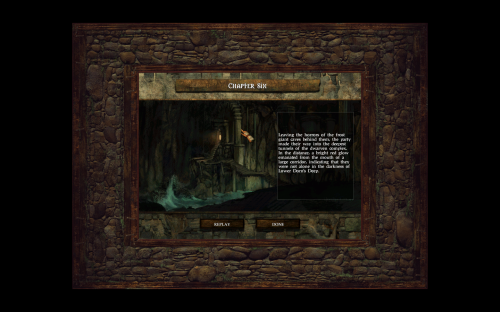 Again, can’t stress enough how much I enjoy the storyteller.

Haste is an awesome spell. Sure, it sucks that you usually have to rest once you use it, but with three strong hitters swinging away twice as often, barely anything survives for more than a few seconds. That, combined with Bless and one of those prayer spells (Chant, Prayer) obliterates almost anything, meaning most fights were easily handled and the only time I was forced to reload was then the enemy got lucky and struck a killing blow on one of my weaker characters before I reacted.

Chromatic Orb is another great spell. It has a high chance to stun an enemy, making him immobile and easy to kill. It’s even better when it works on spell casters. Additionally, if I kill a stunned troll, there is no need for fire or acid.

It’s extremely easy to abuse the game, especially the AI, and I have to admit, I’ve been doing it a lot. The main thing I do is lure the enemies to me one at a time instead of charging in. Robin is the one I use for this, since I can additionally dwindle down the lured opponents health with arrows while it’s approaching. Sure, this means I run out of arrows quickly, but Robin also does OK in melee, so it’s not a huge loss. I always carry some spares for the tougher fights or when a ranged creature needs to go down quickly.

I’d love to say that I have nothing to spend my gold on, but if I really think about it, I vent very low recently, and there’s bound to be something to spend it on soon. If there isn’t, I’ll file a complaint, but for now, it’s all good.