As I said before, I will be covering one chapter in every report. I could go with one report per session, but not all my sessions are equal in length or content, so that would probably end up sucking way more than this is. In this one, we cover Chapter IV.

The first area of the dwarven caverns was actually a natural cave. Though the outside was guarded by neo orlogs, the inside was infested by, I guess, the cave’s natural denizens – mychonid and ettin.

I abused the hell out of this first area. Both of these enemies attack alone, so as long as I made sure to keep only one of them in my line of sight, I was able to pick them off with Robin and her arrows one by one. The only real danger was a paralysis effect the mushroom men sometimes inflicted, and the huge amount of damage the ettin do. They are able to kill Rax in one or two hits and three lucky shots can be enough to even kill Lorelei or Priscilla (remember, they are a Fighter and a Paladin, respectively. 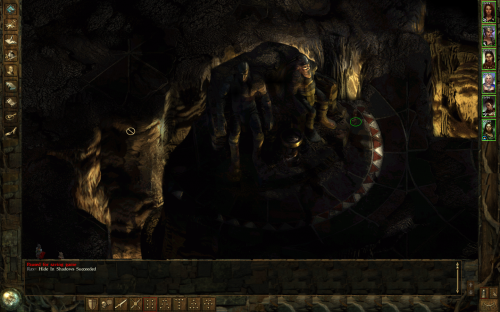 The first area is decorated with these statues. I’m not sure if all of them are dwarves.

This big first area had several adjacent small areas. Two were filled with minor groups of orlogs and orcs, and one of them was supposed to be an ettin hovel or lair, where I found something called Razorvine Extract. I wasn’t sure what it does, but judging from the description, I assumed it was part of some quest. 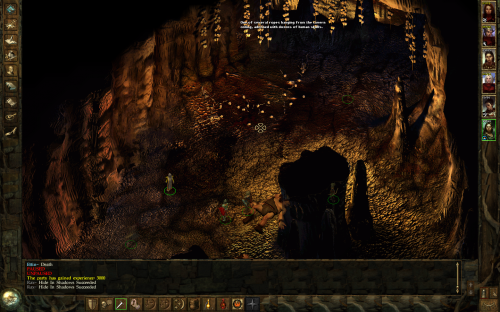 Ettin heat humans, I guess. This is their lair.

On a side note, I did it again. Every time I assemble a party in a Dungeons and Dragons game, I go with the classic approach. I aim to have two front line combatants, a thief, an archer, a mage and a priest. Sometimes the priest is actually a druid, but for the most part, these are the archetypes I aim for. The thing is, I always pick the ranger as the archer, even though a fighter is probably more appropriate. Technically, all that matters are weapon proficiencies and THAC0, but the thing about the ranger is that they usually end up being awesome dual wielders, so archery is often wasted on them. Well, Robin is my archer, and she’s a ranger, again. This only occurred to me now.

The second area started off with a large fortified entrance guarded by orc archers, different types of orog, as well as several drow fighters and spell casters, which is a first in Icewind Dale, at least for me. 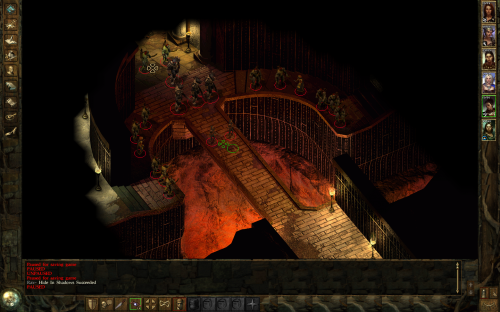 This is the draw ambush at the start of area two. Halflings were harmed in taking this footage.

This followed by more fighting against drow and orlogs (I’m probably using the wrong word here), until I found a large floor puzzle without any hints to solve it. Some looking around led me to a passage into a cave. It was really difficult to spot and looked more like a rock than a tunnel, but it led me to a former wizard now turned umber hulk. He gave me some information about what was going on here and told me I need to find six keys to solve the puzzle. 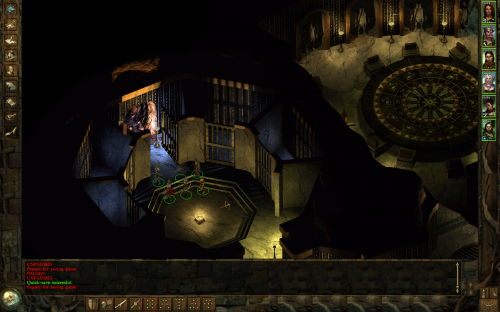 That rock formation is supposed to be a tunnel.

An orlog chieftain nearby had one of these items, but that was the only one I could find. I did more retracing and even returned to the first area, where the mychonids and ettin respawned, so I was hopping I was on the correct trail. I realized there was a cliff passage I didn’t explore, which lead me to a building with a hermit nearby. He wasn’t very helpful, but did provide some information, saying the puzzle can be solved with guesswork to. I’m not sure if that’s what I’m supposed to do, but I decided to give it a try. 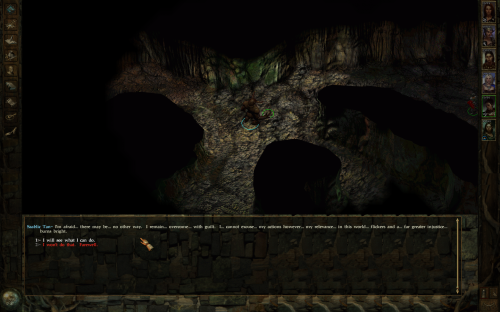 This is the former wizard now turned umber hulk that asked for my help.

The hermit was also willing to trade, so I bought a bunch of conjuration spells from him. I lucked out and managed to successfully write each of them  into Aleen’s spell book. She can summon shadows and elementals now.

Before going back to the puzzle, I took the opportunity to go back to Kuldahar and restock on ammo, which I was running out of.

I sold the loot and got up close to 80.000, but then I decided to finally do some spending. I bought all the scrolls I could at the mage shop and tought them to Aleen. Then I realized the shop restocked and has an amazing robe and cloak on offer.

Ogi-Luc’s Great Robe set’s the wearer’s strength to 18/99 and gives him +2 to constituion in addition to providing four base armor class. I gave it to Aleen and got rid of her Necromancer’s Robe almost instantly. 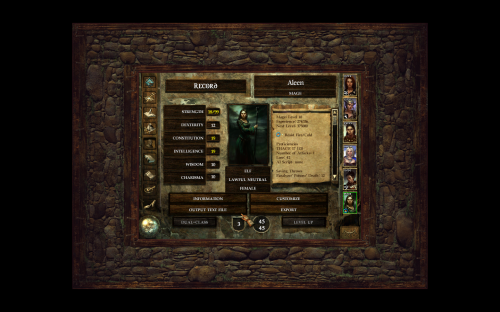 Aleen could be a fighter now. Not really, but it’d be nice.

I also bought the Mantle of Hell’s Furnace and gave it to Priscilla, since she didn’t have a cloak. It gives her the ability to cast Burning Hands, Charm Elemental Kin and Agannazar’s Scorcher. I figured she’d make good use of it, since she’s already in melee range. This and the scrolls all got me down to only 30.000 gold, but I’m not worried. The enemies now regularly drop enchanted equipment, so money should not be an issue.

A real-life day later, I wen’t back to the depths and decided to brute-force the floor puzzle. If there is a way to get all of the keys, I couldn’t find it. Honestly, I didn’t try too hard either. 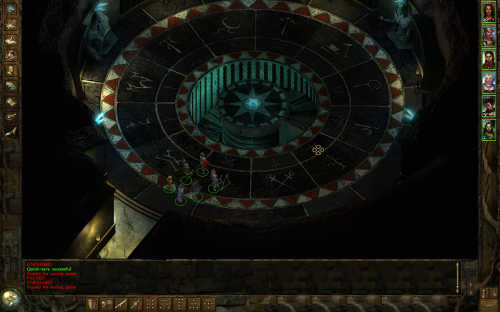 Solving the puzzle causes these stairs to appear.

The puzzle consisted of walking through three circles over the correct tiles. Missing one meant triggering a trap which does a lot of damage and starting over. After lot’s of saving and reloading, I got through it, which unlocked the lever in the previous room. Pulling that lever then created a set of stairs in the room with the floor puzzle. I guess this was a (not extremely) clever way to make the player leave an area so it can be switched out with another area.

Dorn’s Deep is supposed to be a dwarven settlement, but I was yet to see a dwarf, because they are all dead. I did see a dwarven ghost, though. He said the catacomb levels were infested with the undead, lead by a lich who I needed to get rid of.

In Dungeons and Dragons, liches are extremely powerful undead. They cannot be completely killed directly. Instead, you need to find and destroy their phylactery. Because of that, most liches in D&D games are involved in a quest somehow and this one was no exception.

It was a short quest, though. I had to go through the halls of the dead, while fighting the lich and the undead it summons. After getting through two areas, I got to a tomb where his phylactery was hidden, took it and brought it to a different tomb nearby, where a negative plane vortex conveniently existed. This destroyed the phylactery and also immediately destroyed the lich. 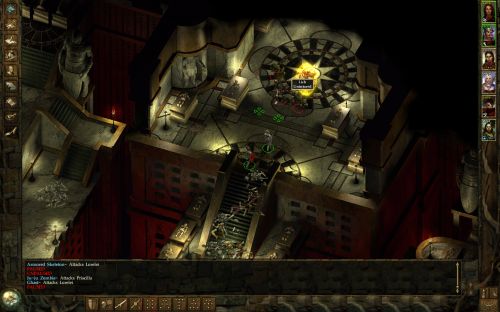 You can “kill” the lich, but he keeps reappearing until you complete the quest.

The quest alone was short and simple, but it was also very difficult. I had to fight a lot of undead, dodge traps and fight the lich while being unable to rest or in a lot of cases even save my game. Through trial and error, I got to the phylactery, disarmed the traps guarding it and took it with Rax to the other tomb, while the rest of the party was keeping the lich busy.

The quest was extremely lucrative. I think I got at least a dozen magical items, various spells and scrolls and at least 200.000 experience in total, counting monster kills and quest rewards. I talk about this like it was optional, but in reality, I needed to complete this quest to unlock the way forward and into Chapter V.

Before I did get to chapter V, I managed to die a couple of times to some bronze guardians. I actually thought they were regular armored skeletons when I realized to late that one of them took about 80% of Lorelei’s health with a single hit. Luckily, they aren’t at all resistant to spells, so a Chromatic Orb kept one frozen and easy to kill, while the other one was mentally dominated by Alana. 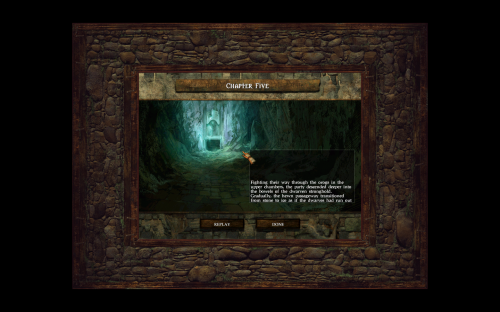 The intro to chapter V. I really like the narrator in these things.

Chapter V takes place  in the deeper levels of Dorn’s Deep, or at least that’s what the game describes it as. As I entered it, it simply looked like an outdoor icy area, so I’m not sure what’s going on. I know it’s called something along the line of Wyrm’s Tooth.