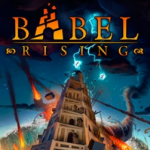 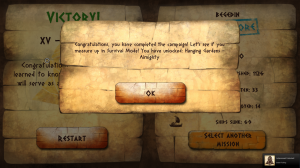 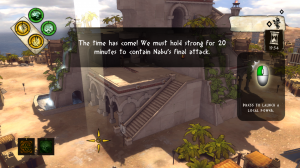 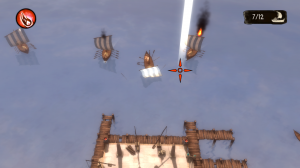 A while ago, UbiSoft had some sort of special deal on their site where you could get a certain amount off of most of their games. This meant that you could actually get Babel Rising for free and it included a Steam key. This was nice of them, and I truly appreciate the gesture. They have a bad reputation on the PC and it seems like they’re trying to restore it. 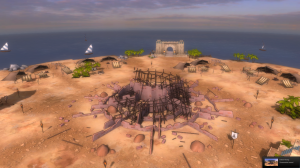 One thing is for sure – Babel Rising is a pretty game.

That being said, I don’t really like Babel Rising. I tried to like it. Since it seems like a relatively short game, I might even try to complete it. I just don’t enjoy it. It seems like an interesting idea, but it needs more than what it is right now.

Babel Rising is sort of like a tower defense game, except you don’t build any towers. Instead, there’s a bunch of villagers trying to build the Tower of Babel (or one of the two other structures you can unlock) and you, being an angry god, use your powers to punish them and prevent their success.

Sounds pretty cool! I bet there’s a lot of powers you can use!

Not really. As far as I can tell, there are four elements with three powers each, Two of those are used regularly, while the third is a chargeable ultimate attack you can use a couple of times per level.

But I bet those powers get upgraded!

Wrong again. Well, to be fair, I might be the one that’s wrong, since I’ve been playing for only a couple of levels. Still, in those couple of levels, there were no upgrades at all. I got to try out all four of the elements and I got to pick two out of four to carry with me into battle, though on the levels I played through, I didn’t really get a proper choice, since I could only pick two specific elements on each level. 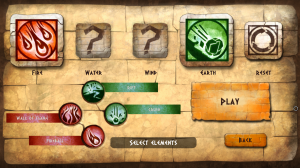 Earth and Fire are the first two powers you unlock. By level 5, you unlock all four.

What about the multitude of funny looking enemies?

I’ve seen a total of three enemy types in the first five levels. There are regular villagers or builders, who just climb up the tower and build it further. Then there are priests. These create a protective shield around them which blocks a single element, so you have to use another one to break through. Finally, there are cursed jar carriers. They climb up the tower for a while, carrying a jar, eventually drop it and a while later, the jar disappears. If you hurt them or the jar, you get punished by having one of your six powers blocked for a certain amount of time. 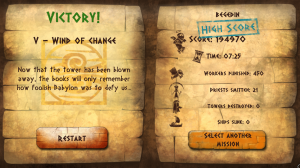 That “Restart” button makes me think I missed something.

So what’s good about it?

The game is very pretty and nicely designed. It would probably work great on a tablet and it’s obviously made for that. It’s just not deep or engaging. As I said, the idea itself is great, the incorporation of physics into the mechanics works amazingly well, and overall, it’s nicely polished. I’m sure a lot of people would like it. I just need more from my tower defense game. From what I’ve seen, this is just an exercise in clicking.

So no more Babel Rising?

That being said, Babel Rising just might be short enough for me to complete it. I got through 5 levels in about an hour. I know there are at least five more, though there might be more than that. I tried some light googling, but I couldn’t find out exactly how many levels are there in Babel Rising. If I do get through it, I’ll be sure to write this information down, since I’m sure there are other people wondering about it to. 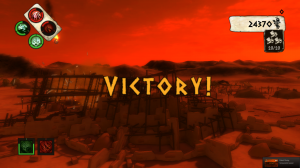 I managed to win a few levels with my ultimate powers still doing their thing.

I know there can’t a lot more than ten levels, since with the five I’ve unlocked, I got 3 out of 12 achievements and unlocked two out of three Survival levels, as well as an extra difficulty in Survival Mode. I also got to try out all four of the elements.

There might be just 10 levels in total, or at most 15. I’ll try to find out, but I can’t make any promises.