The Review : Is Brave Story a Proper JRPG?

As you can tell, I really love classic style console role-playing games, and Brave Story is a perfect old school example of one. Brave Story is a new game, but everything about it feels old school. You have this unremarkable kid who ends up becoming the savior of a world, loyal friends and companions he meets along the way and evil enemies he must defeat, rivals he takes back on the right path and plenty of adventure along the way.

The mechanics of Brave Story are not too complicated. You have your primary attributes which grow with experience and get increased by equipment. As you level up, you learn new skills, and as your party members grow fonder of you, you learn new unity skills, which are combo attacks involving multiple characters. Your companions can change their weapon and armor, while the main character’s sword upgrades during the story. Each character can also equip three accessories which are either found, bought or crafted, provided you find the right recipe. 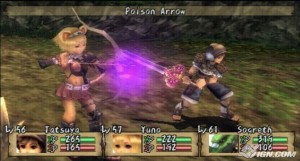 The graphics are in the 3D anime style, with the level of quality close to the PS2.

There are plenty of characters in Brave Story, but you are slightly encouraged to choose a fixed group to play the game with. Still, switching isn’t impossible and if you like, you could max out every one of them.

Brave Story also includes plenty of side quests, which provide rewards in the form of new crafting recipes, equipment or various other items which help you on your main quest. You can also catch birds in special mini games, which you can then use in bird fights and acquire even more rewards this way. There’s plenty to do aside from the main quest and you don’t have to wait until you reach the end game to do a lot of those things. It is, however, much easier to complete the side quests once you can freely fly around the map.

Once you come to that point, you also get to visit an extra hard bonus dungeon, where you can fight a special boss, for even more rewards. The graphics are simple, but nice and the characters are very detailed. The sound is just as good. Brave Story looks and feels like one of the classic PlayStation era JRPGs so any fan will truly love it. In any case, if you love a good JRPG, you won’t go wrong with Brave Story. It’s one of the best games of this genre the PSP has to offer. While we’re at it, I should also recommend watching the Anime. It has different characters, which appear in the game as cameos you can actually play with for a while.