Yeah, so I lied. I couldn’t resist and I cleared the rest of the FOE’s on level 2. I didn’t get any new equipment, but I leveled my main team for a bit. I’m broke now, so I will have to do some harvesting pretty soon.

Since my computer is working again, my DS is kind off on the bench lately. Worry not though, exams are coming up soon, so I will be riding the train a lot if you catch my drift. I was on a train today also, so I’ve spent some time in the game. I’ve also played a bit a few days ago, but I forgot to write about it, so I might have some issues recollecting everything.

Anyways, I managed to find the way to the fourth level, encountering the lost ninja on the way and helping him avoid some angry hippos (extra dangerous monsters on level 3). Before I went down the stairs to level 4, I returned to town to get a new mission from Via Senatus. I am to kill a giant fish that lives in the swamps of level 4. I can’t proceed further down to level 5 before I do this.

The fish was in the last huge room, as expected and I also found the passage further, but I couldn’t go through it with the fish still alive. I prepared my team, including a prince I decided to accept into the guild as a replacement for Rodney in the main team. Rodney will now be exclusively leading the peon team to gather raw materials. I attacked the giant fish and managed to get it to about 60% health before it kicked my ass. Sadly, it seems I will have to change my strategy, or even train up for a bit before attempting this again.

I recovered and entered the labyrinth again. I went down to level 4 to map the rest of the area first, and then I’ve spent some time on levels 3 and 4 to train up for a bit. Once I felt I was strong enough, I decided to try and tackle one of the dangerous giant lizards at level 2. I managed to kill one and sell his remains at the market, which allowed me to get a new, stronger spear crafted for Charles. This allowed me to go and kill more lizards and also to find a Power Book in a hidden passage guarded by one of them. Michael read the book, which increased his strength to 20, so he will also be hitting harder. I still think that I need to train more before attempting to kill the fish again, but I am positive I’m getting there now.

Anyways, that’s as far as I got on the train, so you will probably be getting an update sometime next week, during my next ride.

I was hoping to update sooner, but there is no time for writing when you play the game. (^_^)

Anyways, after registering my guild, I had to go to Via Senatus in order to get my instructions from the city leadership. The old lady there told me that I need to report to the guard at the first level of the dungeon, who will then instruct me further in my task. Before all of this, I explored the town, checked the shops and the local Bistro for any quests, but it seems that the first mission is the only one I could take for now. It was time to descend into the dungeon.

The guard was quite easy to find, as he was guarding the passage to the more dangerous parts of the first floor. He tasked me with exploring and mapping out the area I can currently access, so I went and did this. I was forced to return to town several times to recover, but eventually, the area was mapped out. I reported my success to the guard and he told me I should also report at Via Senatus, so I went ahead and did that. During all this, I managed to make some new equipment available at the shops, thanks to all the materials I’ve been gathering during my exploration.

I geared up as much as I could and returned to the dungeon to explore the rest of the first level. Before I did that, though, I stopped at the Bistro to see If there are any missions available this time. There were. Among other things, a farmer was looking for a nice resting part at the first level of the dungeon, and the Bistro owner was actually looking for some ingredients for a meal she wanted to prepare. I took all the available missions and went to explore the rest of the dungeon. Again, I was forced to come back to town several times, but in the end, all of the areas I could access were fully mapped. I also found a locked treasure chest which I made note of for the future, as well as a mysterious gate with a moon shaped symbol on it. I will probably be returning for both of these things at a later time.I successfully completed all of the available missions and have found the stairs to the next floor, so I decided to go there.

I got my ass kicked by a giant bird monster as soon as I descended down the stairs.

It seemed that a change in strategy was in order. I was low on gold, so I couldn’t really buy the best available equipment for my entire party.Then I had an idea! I registered four more farmers at the guild hall. I don’t really care about their names, as they wont be adventurers, just peons to do the physical labor. I put them under Rodney’s command and took them back to the first level of the dungeon. They are highly trained in the gathering skills, so I took them to one of the lumber gathering points of the dungeon and worked their asses off until they were to exhausted to continue. We went back to town and sold all the things we gathered for about 600 gold.

That wasn’t enough, so I repeated this process over the next few days, leveling all of them to level 3 on the way and maxing out their harvesting skills. I could easily bring in 1000-1500 gold per day like this now. Once I geared them up properly, I started collecting gold for my main adventuring team and geared them up to.

I also went back to the Bistro and spoke to some guests. One of them told me that the green bird monsters only come out during the day, so I decided to explore the second floor during the night. My main adventuring team was ready to try again. I went down to level two and, this time, the fights weren’t hard at all. I started exploring, but pretty soon, I was stopped by a fancy looking guy who claimed he was here to help novice guilds. He explained everything about some dangerous monsters patrolling around and how to avoid them. Since I really was a novice, I decided to heed his advice and managed to avoid a few patrols during my explorations.

Pretty soon, I’ve encountered another person, this time a girl called Olympia. She explained how to find good campsites and use them to rest if I carry a tent with me. This was some more good advice, so I took heed of that also. After doing some more exploring, I started encountering muddy areas which really slowed my movement. This was another danger that could make avoiding patrols much harder, so I started marking such areas on my map. Soon, I encountered a third person, this time Hypathia, a member of the Muratsume guild. She was looking for one of their ninjas called Agatha, who went missing a while ago. She seemed tired so I offered help so she could go back to town to rest. I guess I’m nice like that.

I explored most of the area and even found the stairs to the next level, but then decided to go back to town to see if there’s anything new. Sure enough, there were three new missions at the Bistro. Someone was looking for some more ingredients, a group of adventurers from the Pale Horse guild went missing and thirdly, some farmers were looking for someone with experience to take part at a farming conference. Since Rodney was quite skilled by new, he offered to deal with that one. We waited for him to get back and then went back to the forest.

Soon, we encountered a guard and inquired him about the Pale Horse adventurers. He said that we should probably ask someone back at the Bistro, maybe even someone from another guild, as they do communicate allot. I did this and found out that the Pale Horse is a very cautious guild so they would probably look for the campsites on every dungeon level first, before doing anything to dangerous. I decided to go to the campsite and ask Olympia if she saw them. She said they did camp there, but then went down to the third floor. Since the dangerous monsters were still to tough for me on this floor, I decided to follow them.

Pretty soon, I’ve found another campsite, but there was blood everywhere. It seems that the Pale Horse adventurers fell prey to the monsters. With a heavy hearth, I went back to town to report the grim news, but it turns out I was wrong. I must have missed them because the adventurers returned while I was away. The blood wasn’t theirs, but belonged to the monsters they dealt with. Still, I did the Investigation, so I got the payment for the completed mission anyway. I guess everyone is happy, so it turned out fine.

This is where I decided to take a break and continue later.

I played the first part of this series, but I was thrown off by the grind relatively close to the start of the game. Apparently, in the third part, the grind isn’t as bothersome, so I decided to try it. I made a party and started the game. 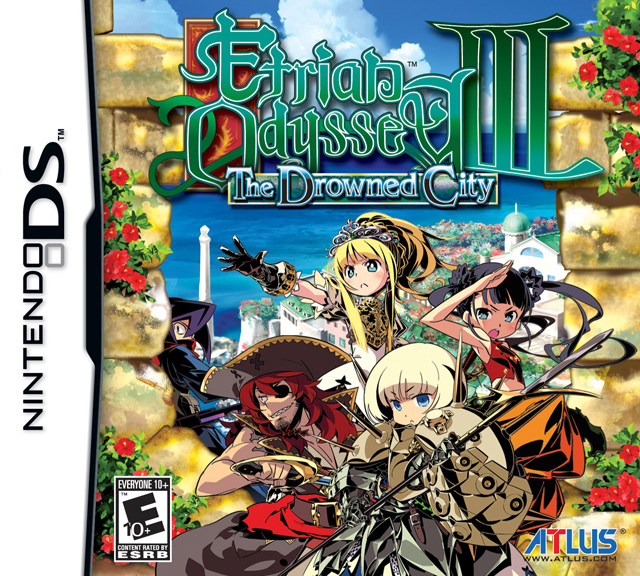