This is the second part of my Earthquake mission write-up for Age of Wonders. Last time, I lost half an hour of game time due to my hero dying and autosave deciding to turn itself off for some reason. In this posting, we make up for those 30 minutes and see where it takes us next.

I sort of knew what to expect during the 30 minutes I lost, so it was easier and quicker this time.

Elric heads west, same as before. We send a builder after him to rebuild the ruined city. We capture the goblin city with Elric’s party, immediately migrating it to dwarves. Elric moves further northwest and reaches the large goblin army. We try to defeat it, but we fail, several times. A single unit is a threat here – the Karagh. If one of these guys reaches Elric, he’s dead the next turn – that’s how strong they are. 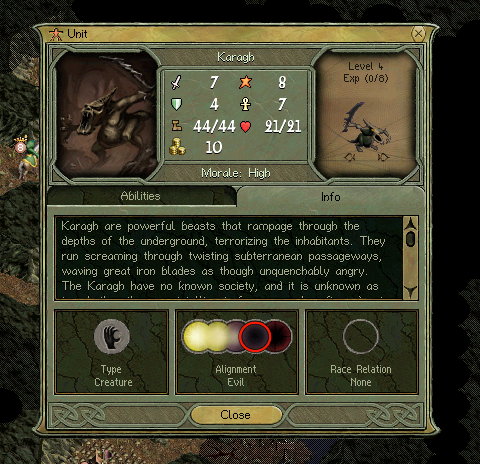 These guys are scary.

Instead of attacking the goblin city head on, Elric’s party explores around a bit, hoping the AI decides to send a smaller troop at them. While exploring, they find three new points of interest. 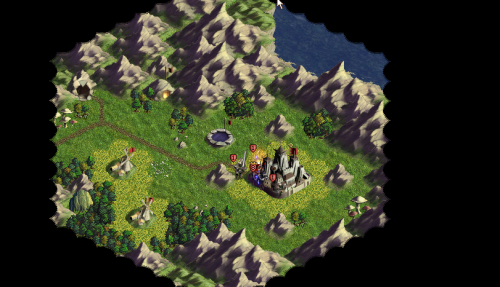 Capturing a capital and defeating the enemy hero usually means the entire faction is done.

The arena allows us to train any of our units for a price, all the way up to their maximum level. This gives us access to elite units whenever we want, so I use most of our money to train everyone in Elric’s party. 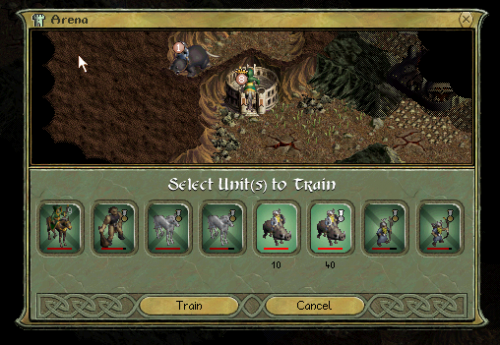 The cost depends on the level and the unit.

Finally, there’s the teleporter, which can transport a party somewhere across the map, but we’ll me staying here for the time being.

Meanwhile, Devon’s party doesn’t go for the surface this time. Instead, they are sent through the southern passage in the depths, hoping to find more goblins to destroy, since someone keeps capturing that fire node. We soon find a goblin outpost guarded by a small group, next to the ruined Dwarven capital of Deepmir. This one is important for the plat and the mission, so we capture builder’s hall nearby, queue up a builder and prepare to capture the goblin outpost. 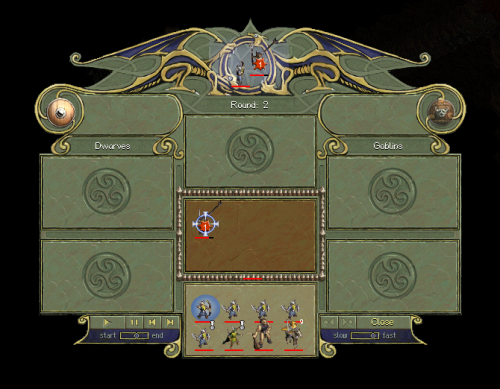 It was an easy battle, so I used auto-combat to save time.

What worries me here is that there was definitely a Karagh in that group, so he must have sneaked off somewhere.

Deepmir is a large city. It costs 100 gold to rebuild, compared to the usual 25, takes up four hexes and has two Builder’s Halls and two Tower Forts nearby. 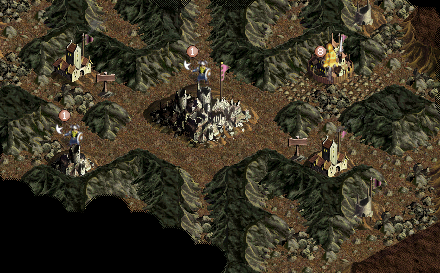 I’m rebuilding the towers just for the heck of it.

Our patiences pays off on Elric’s side of the world. The Goblin AI makes a fatal mistake and leaves the capital with just one party defending it.

I capture it, but then I realize I made a fatal mistake back in the great cave. Somehow, a group of units slipped past me, captured a couple of my mines and even took a city. Now my forces are spread too thin and I have nothing to liberate these cities with. Devon casts the Town Gate spell to get there in the next turn, though this risks me losing Deepmir again.

I think this was a good choice, but overall, things go badly for us anyway. The small enemy troop keeps taking our mines and cities in the center of the empire, so I’m forced to take Elric’s party to help to, but this leaves the captured goblin capital poorly defended and I end up losing it to a bunch of beetles. It looks bad now, but the thing is, there’s still a chance, as long as we clean up things properly.

Elric arrives and starts cleaning house together with Devon. For a moment, things are looking up and then Deepmir gets captured. 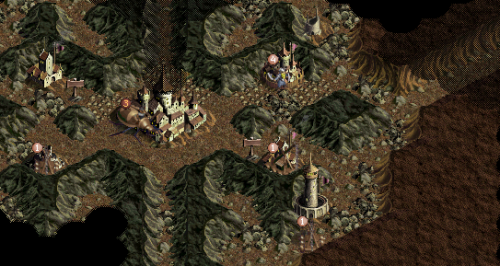 I had two units on the western edge of it. Now they joined with the 2 in the outpost.

Except I had two units in it and there was no battle. Apparently, with a city as big as Deepmir, not all hexes are officially a part of it.

The next several dozen turns were eventful, but unremarkable. First, the enemy units sneaking through the empire were found and killed. Then, the cities were recaptured and migrated back to dwarves, if needed. Then, I created several parties and sent them to various choke points, pushing forward inch by inch. I conquered and rebuilt the area around Deepmir, giving me a nice bastion in the depths, where I could quickly train high-leveled units. 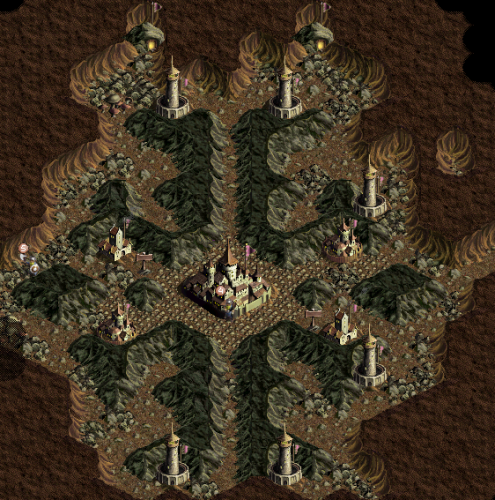 Deepmir is a great place for a base, but difficult to defend without being careful.

Elric’s party pushed into the depths from the western front and discovered there was a single large city between that side and Deepmir, responsible for most of the annoying attacks. It was quickly conquered together with a nearby outpost, merging two fronts into one towards the south. 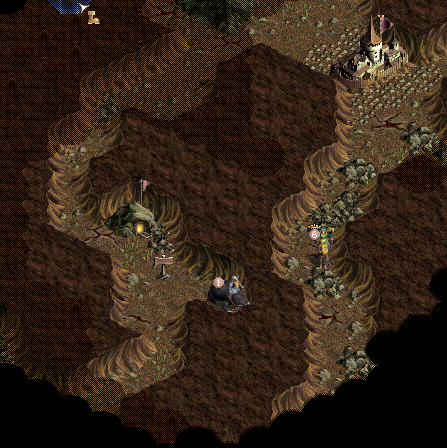 The giant mole is about to merge two passages into one. I hope that isn’t a mistake.

On the eastern front, Devon’s party finally recaptures Lokos, which was captured and almost immediately lost dozens of turns ago. Lokos is the choke point towards the exit to the surface I decided not to pursue until now. I migrate it to dwarves and start training archers for defense, while Devon’s party continues towards the surface.

Scouting the surface around the cave exit reveals a small area surrounded by mountains, which should be easy to conquer and defend, moving the choke point further. 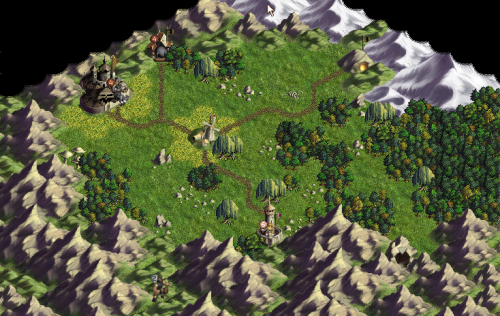 A town, some buildings and a single choke point to the south.

Back in the great cave, I learn a lesson. There are four easily built towns one next to the other in the great cave, with a passage to a different map level in the middle of them. For some reason, I never explored this passage until now. Had I explored it, I would have realized it leads to two more ruins which I could have built on. Even better, tunneling from these ruins would have given me a short route towards Deepmir and would have made the game much easier. 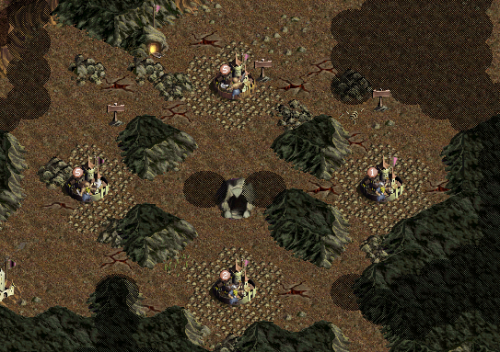 This passage leads to two ruined cities just to the south of Deepmir.

South of the eastern surface area, there’s a dense forest. Passing through it reveals a new first for me in Age of Wonders – a human town of Larfin. They are a race of the neutral alignment, so I’m unable to acquire the city peacefully. The fight is short, though, so it’s not an issue. I also see the humans have orc problems, but it’s a neutral town as well, so I don’t have a proper border with the orc faction yet. 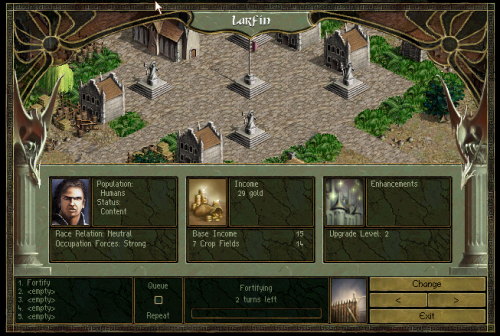 The human population is merely “content”, so I build some improvements to make them happier.

Meanwhile, Erlic’s party conquers two more goblin cities south of Deepmir, clears out the stragglers and fortifies the position there, moving further south. I start migrating a few newly captured cities to humans, so I can further improve my relations with them. I also finally meet up with the orcs and capture one of their larger towns. It seems the AI loves to build siege units, because I’ve been fighting a lot of them. 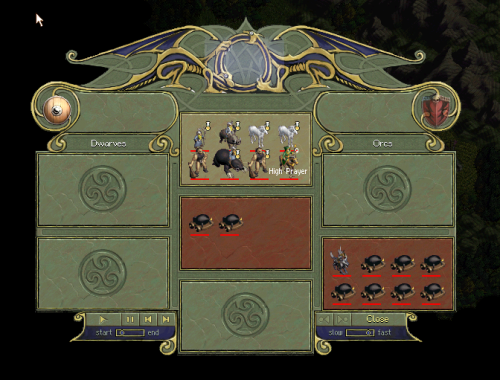 It wasn’t actually automatic. This is just a replay.

Slightly north of this orc town, Elric’s party also discovers a large dwarven city still standing. There allegiance is bought, of course, and I immediately queue up fortifications and upgrades. This one will goes the way to the maximum level. 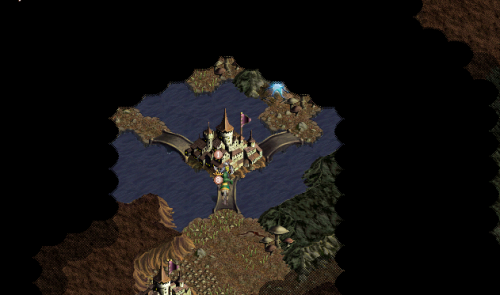 Devon’s party continues to liberate the human lands from the orcs and improves our overall relations with the humans. Eventually, we reach the southern shore of this area and are within reach of the orc capital. I have access to the Freeze Water spell, so I decide to try my luck, after saving the game, of course. 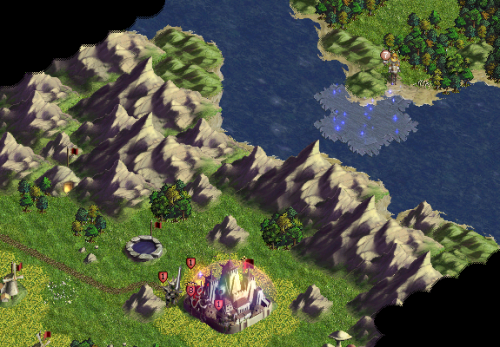 It doesn’t work. Those are mountains to the south, not hills.

After that failure, I decide not to reload and simply move on instead.

On day 156 (turns are days), we are officially out of spells to research. There are more to be had in future maps, but that’s it for this one. Twenty or so turns later, after routinely conquering city after city and constantly pushing forward, we run into another AI peculiarity. They seem to like ships about as much as they love siege. 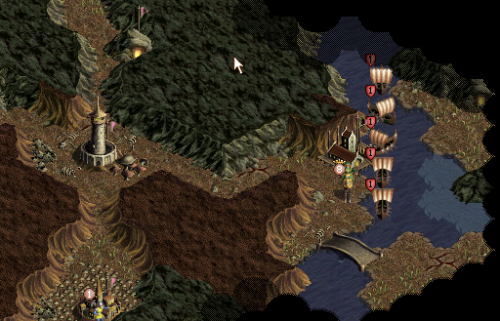 This will be a pain to destroy. I need flying units.

Obviously, things start to slow down in the event department. I conquer at the speed of light, but there’s nothing of note that happens. For some reason, both the orcs and the goblins decided to build up weak units and stick with their cities now. I guess there’s a point of overflow in the mission, where the AI just gives up.

Since I was able to support more troops, I formed a mixed unit of dwarven firstborn and giants, and used them to explore in another direction. Eventually, they emerge to the surface on the far western side of the map. 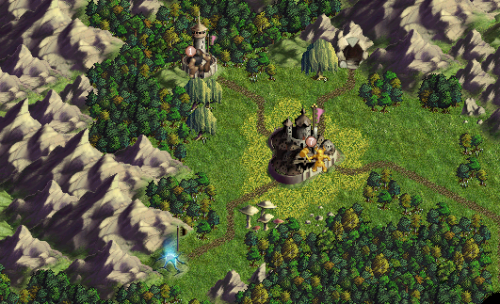 There wasn’t anything happening, so I just rushed to clear it all as fast as possible.

Exploring this area thoroughly with Elric’s party later on reveals a hidden wizards tower in the woods to the south. This is a great thing to find on a map, because it allows you to purchase a spell you might not be able to get otherwise. I’m swimming in gold, so it was a no-brainer for me. 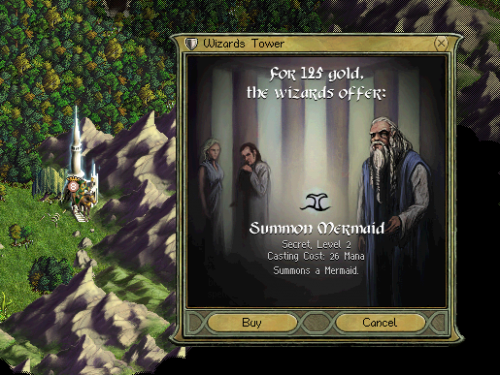 Summon Mermaid sounds useful for ship-hungry AI, but they are weak units.

In all honesty, finding the wizards tower was something I wanted to do before moving on to the next mission. Now that I did and I was so close to the orc HQ, it was time to move in for the final assault. 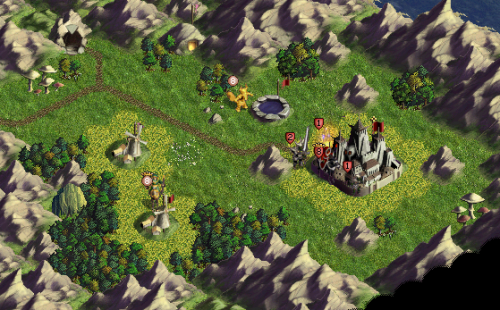 (Soon to be ex) orc headquarters.

I’m extremely confident at this point, so I opt to resolve the fight automatically. All I lose is a single dwarf axeman. Since the fight was outside city walls, I don’t capture the city. Instead, the city goes neutral, with a single weak unit defending it. I move in one more time and that’s it. 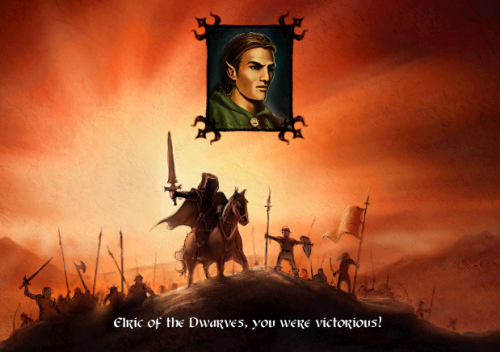 And this is how a single campaign mission in Age of Wonders looks like. How long did it take? Most of my day for both of these reports (this one and the previous one). I’m sure it would not take so long without writing about it, but it wouldn’t be much faster. The reality is, most missions in Age of Wonders take a couple of hours to beat. Considering there’s a lengthy campaign and bunch of stand-alone scenarios, that’s pretty awesome.

My plan for Age of Wonders was to play it at my own pace and write a mission report like this one every few missions or so. Sadly, this didn’t happen.

A few missions after this one, my laptop died, completely, causing me to lose my saves. Considering how lengthy the missions in Age of Wonders are, I didn’t feel like restarting the game. It may happen in the future, but not right now.