Last time on Grandia, I got seriously stuck. The EBOOT I’m using on my PSP turned out bugged, so it kept freezing at the Twin Towers animated cut scene. I tried using the PSP Go Pause Game feature to go around it, but it wouldn’t work. Well, I managed to navigate around it anyway, albeit in a very unconventional way.

How to Transfer saves from PSP to ePSXe?

You see, I have a PC and I’m no stranger to emulation. I dusted off my copy of ePSXe, updated it and got an ISO of Grandia with the same ID as the one I have on my PSP – SCUS94457. I know, I know, technically, this is piracy, but I paid 50€ for the German version of Grandia about 15 years ago, and that amount of money is around 8% of my current income, so sue me. 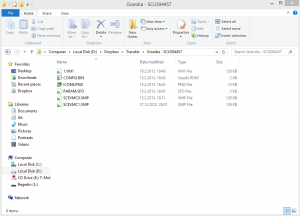 The two VMP files are the actual memory cards.

Anyway , I got the ISO, err, backup and loaded it up on ePSXe. I made sure the two memory card files in the memcard subfolder of ePSXe were created and then I connected my PSP Go to the PC. I found the original saves in PSP/SAVEDATA/SCUS94457 on my PSP Go and copied them to my PC. 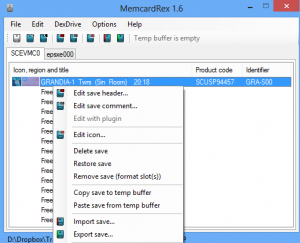 Copying from the PSP Go to the ePSXe memory card is as simple as copying a file.

Then I got an awesome piece of software – MemCardRex. This tools allows you to edit different PS1 save formats, copy save slots from one memory card to another and even create new memory card files. It can edit and save a large amount of formats and read a few more. I loaded up my PSP Go save files in one tab and my ePSXe memory card file in the other and copied the Grandia saves.  I was now able to continue my game on the ePSXe, so that’s what I did.

I got past the Twin Towers, since the dungeon ended as soon as the cut scene was over. What followed was the saddest part of the game and the second saddest moment in my gaming career, second only to the scene from Final Fantasy VII. The game was hinting that Sue was getting more and more exhausted since the End of The World, possibly even sooner, but it finally happened. She collapsed at the village of Dight. 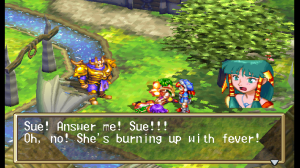 I didn’t notice the hints on my first playthrough.

Justin needed a teleportation orb from the nearby Mysterious Vanishing Hill to get over the inner sea, though, so Sue did her usual grown up thing and sent him on his way. The Mysterious Vanishing Hill was a relatively short area, made even shorter with ePSXe’s ability to fast forward through battles by disabling the FPS limiter. I fought the two bosses there, got the orb and went back to Sue.

She decided to leave adventuring to Justin until she gets older. It’s hard to describe this, but it was a very touching scene and in the end, Justin decided to use the orb to help Sue get back to Parm. This means Sue wont be learning any more spells and I’m one awesome character short. On the game side, I got Sue’s skill books, so not all of it will be wasted, but story-wise, it was still a very sad moment. 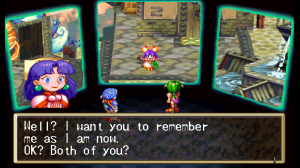 Right in the feeler!

Since teleportation was out of the question, I needed a boat. Luckily, Gadwin had one, so he told me to meet him back at his house when we’re ready to leave. Getting there was a bit annoying, since the area was full of low-level enemies I couldn’t avoid.

I got to Gadwin and then it was revealed I’m gonna lose another awesome character. Gadwin challenged Justin to a duel and this time, I won. He taught me his secret Dragon Move and then said it’s time for him to go on his own Journey. Again, I got his skill books, but I still lost an awesome character. 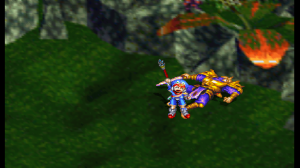 Both battles are rigged, but it’s still a cool part of the game.

I went back to Dight and boarded Gadwin ship. Again, the game offered some touching moments during the voyage and Justin actually got serious for a bit, before a pretty girl ran into their boat, called Justin “her hero” and asked him to save her island from pirates. That’s where I stopped playing. Justin really knows how to kill the magic.

Half way through, though, I transferred my save back to the PSP, because I prefer a bug and stutter free experience, which apparently, ePSXe is unable to offer, even after all these years.

How to transfer saves from PC to the PSP

Sadly, MemCardRex can’t save to the PSP memory card format, only read from it. In order to transfer my saves there, I had to go with a different route. I downloaded the CWCheats plugin for my PSP Go. There are different versions of the plugin out there, but not all of them work on the PSP Go, so I had to find the right one. This plugin basically allows for hex cheats in PSP and POPS games, but it can also replace entire memory cards on the fly and it also allows ePSXe save file imports.

In order to get to that point, I had to rename my ePSXe save file to the GAME_IDE-#.mcr format, which ended up being:

I renamed it to that and then copied the file to the seplugins/cwcheat/mc folder on my PSP. Then I made sure the plugin was working and I loaded up Grandia. Once I was at the title menu, I pushed and held Select for a few seconds, which caused the cwcheat menu to appear. From there, I was able to import the ePSXe save from the Manage Memory Cards menu. If the file doesn’t appear for you, make sure you named it correctly. It needs to be named after the game ID, which you can also read from the cwcheat menu while the game is running.

Anyway, I got past the freezing bug at Twin Towers and now I’m able to keep playing my game on the PSP Go.