Since last time in Pokemon Ruby, I did a lot of training. A lot!

Game Freak Is Full of Trolls

Seriously. Why would the developers decide it’s a good idea to give most Pokemon on the Victory Road, which is probably the best place to train before the Elite Four, a move which allows them to kick the player’s Pokemon out of combat. 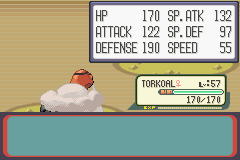 I told you it was going to get strong.

Sure, after a while, most of my Pokemon were able to sweep through the encounters in Victory Road, but it was still annoying. There I am, hitting Hariyama three times with Ice Beam already, only to be kicked out of battle and wasting those 3 PP.

It was annoying, but I did it anyway. Pikachu, Corphish, Glalie and Swellow eventually got easier to train, and Torkoal was a breeze right from the start, but my starter, Grovyle, wasn’t able to be effective at all. It had a type disadvantage against mos of the Pokemon in there, so I ended up going back to the overworld, fighting Tentacools for ages just go get to level 55.

After about an hour of fast-forwarding in total (gotta love GameBoy Advance emulators), I got most of all of my team members to either level 55 or 60, because I like round numbers. I decided to give it one more shot, stocked up on potions and went for it.

Sidney was easy to deal with. I got rid of his Mightyena, Cacturne and Shiftry with Torkoal, switched with Pikachu for his Sharpedo and then brought back Torkoal for Absol. 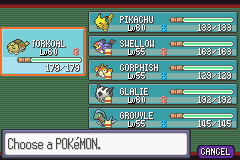 I could have trained even longer, but this would have to do.

Next up was Pheobe, who used Ghost Pokemon. This time, I didn’t have any type advantage, so I ended up using mostly Torkoal and Glalie, my two most powerful Pokemon. I had one of my team members faint, but I had plenty of items in stock to heal after the battle. 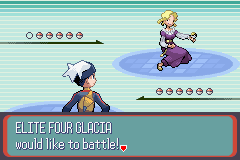 It’s like she was destined to become an Ice trainer.

After that, it was time for Glacia, who used Ice types. Pikachu did some major damage here, but I had to switch him out for Growlyle, who handled the two Sealeos with Mega Leech. Overall, this member of the Elite Four was the hardest.

Finally, I fought Drake, who was, obviously, a Dragon Master. This part was the easiest. My Glalie swept through his entire team without any trouble.

The End of the GameBoy Advance Chapter

After the elite four, I went to the final room, but didn’t heal and ended up fighting Steven mostly out of PP on my most important moves. Even so, thanks to some switching around and item usage at key moments, I got through it and came out on top. I also had a type advantage against most of his Pokemon, so that helped a lot. 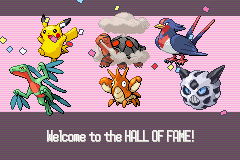 I don’t have to manually edit the victory screen any more.

The League was, again, won, and the GameBoy Advance chapter of my Follow Ash challenge is now over. Even though I ruined my Pikachu, this will probably be my favorite part of the challenge. 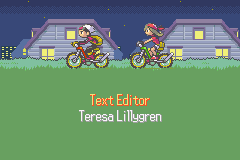 Sadly, I now have to move on to the Nintendo DS, which means I wont be able to fast-forward as much. What’s worse is that I probably won’t be able to play the game on weekends, since my laptop isn’t really up to par for DS emulation, so I can only play it on my PC, which I don’t have access to during weekends. What I’m saying here is, I won’t be completing Diamond/Pearl or Black/White as fast as I did the first three generations.