It’s been some time since my last part of the “Follow the Anime” challenge, so I think it’s time to start planning for another one. Since I’ve recently attempted a Nuzlocke Challenge in Pokemon Emerald, I decided to go with Pokemon Ruby as my third generation game of choice.

In the Hoenn region, Ash manages to acquire even fewer Pokemon than in the Johto region, with me being able to count only four in total. Three of those evolve during his travels through the region, but even so, that’s a tiny number. On the other hand, this might also mean I’ll have an easier time with outleveling my enemies. We will see.

The Starters in Pokemon Ruby

The three starters of the Hoenn region are Treecko, Torchic and Mudkip. While I had a tough choice in Pokemon Crystal, what with either having to start with all three of the starters via cheats or step away from the anime by only picking one, which is what I did in Crystal, there really is no choice in Ruby. 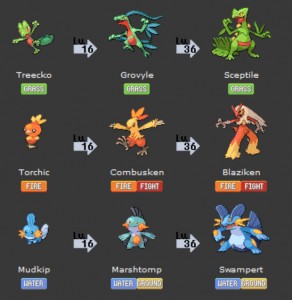 The hoen starters have the coolest grass type, in my opinion, though as a combatant, it still sucks.

From the three starters, Ash only gets Treecko. This means my choice is simple and I actually won’t have to cheat to have my roster follow that of the anime in this game. Of course, I’ll have to cheat to transfer Pikachu over, but that’s about it.

Treecko will evolve some time between gyms number four and five – Lavaridge and Petalburg. He doesn’t evolve to its final form during the Hoenn journeys.

The rest of the Pokemon are also relatively easy. I probably wont be able to catch all of them at the right moment, but outside of that, all of them are available in all three of the Hoenn games, I believe. 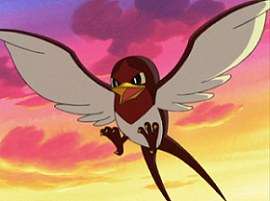 I always need a flyer in my team.

The first of the remaining Pokemon is Taillow. I’ll have to catch him in Petalburg Woods if I want to follow the anime, though I could do it earlier in the game. This is well before the first gym, so I’ll have three Pokemon by the time I get there. Taillow will evolve into Swallow some time between gyms number five and six – Petalburg and Fortree.

Of course, I’ll need a Pokemon which can learn Fly, so Taillow will have to sacrifice a move slot for that.

Corphish will be my surfer, provided I don’t miss to Good Rod needed to catch it. Ash catches it on the way from Dewford City and gym number three, to Mauville City and gym number four. I can fish for it on routes 102 and 117, or even in Petalburg Town, but I need a good rod to do it, which I can get at route 118, so I’ll probably catch it in Petalburg, after I beat its gym, which is gym number five. 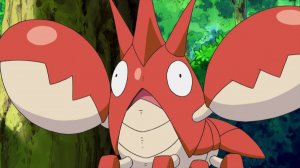 I can only get Corphish a bit later in the game, after I get the Good Rod.

Harden will, of course be replaced with Surf the first chance I get.

Snorunt is the final Pokemon Ash catches in Hoenn and this happens between gyms seven and eight – Mossdeep and Sootopolis. It evolves to Glalie only after gym 8, so if Phanty has anything to say about it, Glalie will probably be useless throughout the game. Then again, it’s an Ice type, which means it might be useful against any dragon masters, so I hope I’ll be pleasantly surprised.

With such a poor list of moves used in the anime, I’m seriously considering to abandon this “rule” I made up in the last game. I need variety in my team and it seems the team I’ll have in Ruby wont have it. We will see. 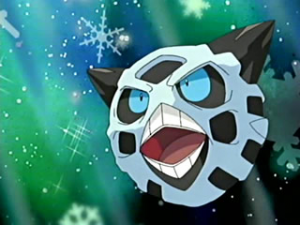 Despite the lame appearance, an Ice type might be fun.

Though Snorunt is the final Pokemon Ash catches in Hoenn, I decided to save the best for last while writing this. Ladies and gentlemen, we might actually have a proper powerhouse in the Ruby part of the challenge. Torkoal is a tough Pokemon which I’ll be able to raise quite well, since I get it about half way through the game. I’m looking forward to this one. 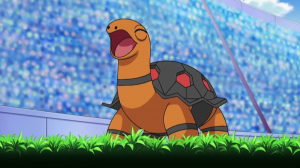 I’m looking forward to getting this one.

It’s a tough Pokemon with great moves. What else is there to say? It also get’s Flamethrower very early, so it will be kicking ass  throughout the game.

In any case, this is the plan for Pokemon Ruby. Right now, I need to figure out the best way to import my Pokedex and my Pikachu into a fresh Ruby save. Hopefully, it’s no harder than it was for Crystal, which I think was already hard enough.