If you play a Pokemon game on an emulator, trust me when I say this, you do not want to start it up on a weekend. Well, maybe you do, depends on your priorities. I started playing Pokemon Ruby on a Saturday and I ended up playing all the way up to the Petalburg Gym in a single sitting. Just to elaborate, this is the fifth gym.

The Start of Ruby

As I sad in my previous posting, I picked Treecko, just like Ash did and then I caught a Pikachu with cheats, before genetically modifying it to resemble my Pikachu from Pokemon Crystal (i.e., I used cheats). Because of this, I didn’t train Treecko to much on my way through the first three cities. 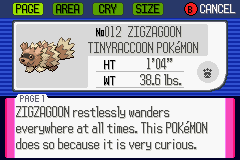 I’ll admit it, I used an HM slave this time. It’s just to annoying without one.

Yup, the first gym you can challenge is way up in Rustoboro City, which is the fourth city of the game and also the large metropolis of Ruby. Little Root Town is the starter town of the game, while Oldale city is the next town over. Petalburg is the third city and it does contain a gym, but it’s owned by the main character’s dad and it can’t be challenged until you get four badges.

This led me to a realization which, in hindsight, should have been obvious. In the anime, Petalburg is the first gym Ash challenges, but he doesn’t get a badge and also has to return to it later. The reason he doesn’t get it is because the gym leader’s son poses as a gym leader and ends up wasting everyone’s time, more or less. Basically, Ash ends up fighting and sort of defeating the main character of the third Pokemon game generation.

Overall, Pokemon Ruby allows for quite a faithful following of the anime’s story. I caught my Taillow in Petalburg Woods, just as Ash did in the anime. I also basically started with Pikachu and Treecko, just as Ash did. This means the first two gyms, Rustobro and Dewford had me in the exact same situation Ash was in. 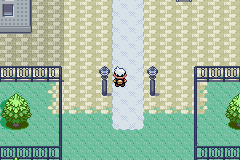 Rustboro is the huge city of Ruby, but only in appearance. The important buildings are in later cities.

In Rustboro, I also had my first encounter with the game’s bad guys – Team Magma. Pokemon Ruby (and Sapphire) sort of mix things up when it comes to bad guys. There are actually two different teams – Team Aqua and Team Magma. While both teams have some strange ideas, in each of the two games, one of the teams is portrayed as the bad guys, while the other team fights them. This ties in nicely to each of the game’s colors, with the red Ruby going with Magma and the blue Sapphire going with Aqua. This also ties in to the two legendaries of the game.

The Rustboro gym was easy to deal with, since it was rock based.  The second gym, in Dewford Town, wasn’t as easy with mostly fighting types, but overall, picking the grass starter puts you in a very favorable early position compared to Pokemon Crystal, I think.

Of course, by this time, I had to start cancelling evolutions, so I ended up doing some more magic with Enciclopedia Pokemon and gave an Everstone to both Treecko and Taillow. Sure, it’s cheating, but it also means I won’t be using any attack boosting items, so it’s not like I’m actually improving my odds. I’m just making the circumstances less annoying. 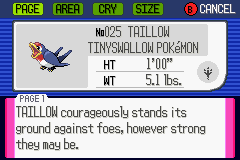 Taillow and its evolution, Swellow, have a good speed and attack.

The third gym was all the way in Mauville City, which means I did a half circle around the Hoenn region by now. This one was focused on the Electric type, so again, Treecko was very useful. Sadly, I had to deviate from the anime now. By this point, Ash already had a Corphish, but I can’t catch one until I get  the Good Rod, which only happens after the fifth gym.

Mauville City also contained a Game Corner as well as a bike shop, which offers two types of bikes in this game – the Mach Bike and the Acro Bike. I picked the Acro Bike at random, but I didn’t really care about it, since I won’t be using bikes for anything in this challenge.

Before I could get to the next gym, in Lavaridge, I had to do almost an entire circle through the Hoenn region. First, though, I went to Verdanturf Town to try my luck with a contest (Pikachu won in the cool category) and to create a shortcut through the nearby cave with Rock Smash.

After that, I went back to Mauville and then further north towards Fallarbor town and further towards Meteor Falls. This is where I met up with Team Magma again, which then lead me to Mt. Chimney, where I finally had a proper boss battle with their commander. After that, I could access the Jagged Pass and finally get to Lavaridge. 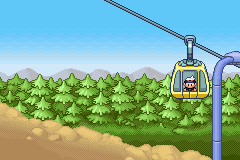 Cut scenes! A first in the series!

The Lavaridge Gym was, naturally, Fire based, so I didn’t have any type advantage. What I did have were a well-trained Pikachu and Taillow, so it wasn’t too hard. After I beat the gym, I immediately rushed back to the Fiery Path to get my next team mate – Torkoal.

Torkoal will be the heavy hitter and the tank of my team. It’s basically the first Pokemon with high level stat values I was able to get in this challenge, so I was very much looking forward to catching it. I spent some time to make him catch up in levels with the rest of my team, so now I had an amazing Fire sweeper. 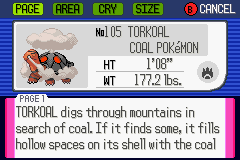 This thing is amazing and it looks cool to.

It was now time to go to Petalburg to beat Ruby’s dad (remember, I’m Ash), so that’s exactly what I did. The Petalburg gym had a lot of Pokemon with varied types, but most of the trainers had only one Pokemon in their party, so I was able to go back and heal as often as I wanted. As expected, Torkoal was amazing in the final battle agains’t Ruby’s dad, being able to survive most of the hits which would one-hit any of my other Pokemon.

I had my fifth badge and I had about four or five hours of play behind me, so I finally decided to take a break here.