I really don’t write these type of posts, but I just have to share this with someone. I just saw a link on reddit to a Kickstarter for the game Road Redemption. Apparently, it’s heavily inspired by the Road Rush series, which I barely touched on back in the day, so there really isn’t any nostalgia at play here.

I don’t know why, but watching the video made me giddy, happy, excited, basically everything positive I associate with games. It looks awesome and fun and I want it now. 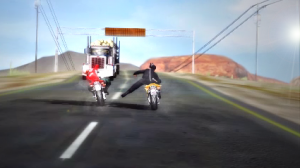 My first thought? “That looks like it’s going to hurt.”. Seconds later? YES! IT DID HURT!

I’m sorry, this really isn’t a meaningful article, but I had to share Road Redemption with someone. The fact that I was never a fan of Road Rash should say something.

My only reservation? It says real time, but it looks staged. If the game can actually create moments like those in the video during gameplay, that’s amazing. If not, then a lot of my interest will go away.