I’ve been looking at Game Dev Story for a while now, but it was the whole Game Dev Tycoon happening that finally pushed me into getting it for my phone. It’s a pretty cool game, so I’ll play it before Game Dev Tycoon to decided if Tycoon is a rip off as many people say.

Everything I wrote about below happened between April 30th and May 5th 2013.

In the last few days, there was another “huge” piracy drama on Reddit and some other sites. I already stated my opinion about piracy, so I won’t be doing it again. You can read about it if you want, in chronological order:

In short, I don’t care about piracy. I don’t do it right now, but I might do it in the future. I have no issues with it. If I wanna pay for stuff, I pay for stuff. If I don’t or don’t have the money, I don’t. It’s not a moral question for me, it’s a practical question.

My opinion is that people who discuss the morality of it usually do it for their own ego and, again, usually aren’t very smart or reasonable people. The only worthwhile discussion of piracy is the practical discussion – how do I turn pirates into customers?

Just as a general guideline, try this. If you think pirates are scum and “there’s no justification”, just accept that you don’t understand the subject and you probably never will. The fact that you considered “justification” as an argument proves it.

Greenheart Games Gets It

The folks at Greenheart Games, the makers of Game Dev Tycoon get it. At least, I hope they get it and this was all just a clever ruse.

For those not familiar with it, the folks at Greenheart Games uploaded their own, pirate version of their Game Dev Tycoon game to the Pirate Bay and then acted all surprised and disappointed when more than 90% of their customers were suddenly pirates. This got them a spot in all the popular blogs and on the front page of reddit and probably got them more sales than they ever would have gotten otherwise.

It was a clever ploy, playing on the ego of the “piracy is literally Hitler” crowd, and it boosted their sales more than anything else would. Either that, or they truly are just the unreasonable masses and they actually did get disappointed when their game, which no one ever heard of, got pirated on the most popular torrent site because that’s the only place people even herd of it, thanks to casually browsing the “New” tab. In any case, the situation worked for them and that’s great.

I Opted for Game Dev Story Instead

Game Dev Story starts out with me picking the name of my company and that’s about it. I opted for the default Sunny Studios, because I didn’t have a better idea. Then, I got to pick my first game and started working on it. It turned out absolute crap, but it made me some money, so I was able to pick a new game.

This procedure is repeated ad nauseam, but somehow, it got me hooked. I probably played way more of it than I ever should over the last few days. Since there isn’t much to write about, I’ll just describe how the game flows

How Does Game Dev Story Play?

First, you pick a game you want to make. The game is determined by the platform, the genre and the theme. The PC is the first platform you start with and overall by far the cheapest platform to develop on. The issue is, most of the time, it’s less popular than the other platforms. 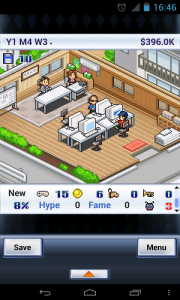 You get to upgrade the office to. The first one is crap.

As Game Dev Story and Sunny Studios advances over the years, newer platforms are released, all a parody of some real-life console or handheld device. To develop on any of those, you need a license, which is costly, but is usually worth the money, unless it’s the VirtualBoy, of course. 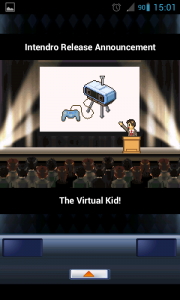 The Virtual Buy can’t get a break anywhere.

You only have a limited number of genres and themes at the start, but you are able to unlock more as the game progresses and you try out new actions and combinations. Right now, I have 2 pages of genres with the third filling up, as well as 5 or 6 pages of themes, such as Robots, Pirates, High School, etc. Each genre and theme has a level stat, which increases as you develop games. The higher the level, the better the game you can make. As far as I can tell, the maximum level is 5. 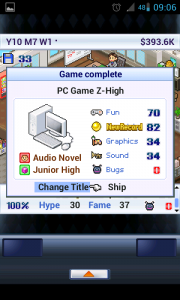 one of my more successful games. An audio novel for PC.

As the game develops, you gain stats for it. The stats are Fun, Creativity, Graphics, Music and Bugs. The first four affect how successful the game will be. Bugs are special. After the game is developed, you can either wait for all the bugs to get fixed, or you can release it prematurely. Both options have their positive and negative sides, but for now, I released all of my games bug free. 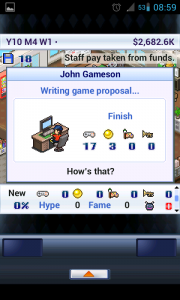 At the start of development, someone needs to write a game proposal.

The rate at which you gain stats is affected by your employees. You can only have a limited number of them and each of them has a job and stats of their own. Based on their job, level and current stat growth, they are able to increase them further via training and level ups. Training costs money and energy, while leveling them up costs research points and increases their yearly salary. Again, their maximum level is 5. As for training, I noticed the cheaper forms of training stop working after a while, so you’re forced to use the more expensive ones. 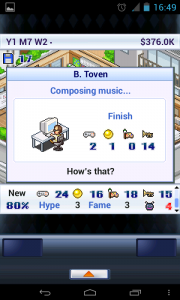 Once the game enters beta, you pick a person in charge of music.

During development, your employees sometimes offer you to greatly increase a stat for a fee. This has a huge chance of failing, which you can reduce by spending research points, but at best, you get an 80% success rate. If you succeed, you get a big boost in a stat, but if you fail, you get a huge amount of bugs. 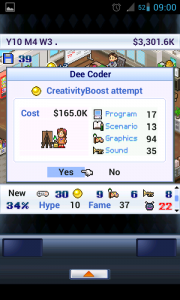 Random breakthroughs are usually not worth it in my opinion.

Once the game is done and you ship it, with or without bugs, it gets rated by four people. Based on the rating, the game’s hype, your companies fan and fame, and probably some other hidden stats, the game gets sold and you get money for it. My record is somewhere above 500 000 copies sold, so I’m not in the platinum region yet. 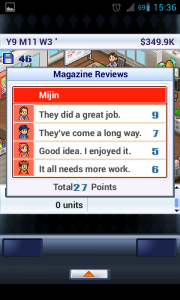 My best reviews yet!

Other than developing games, you can do contract projects which give you a small amount of money and a larger amount of research points. Other than that, you get research points randomly throughout development, or in the final phase, for fixing bugs. 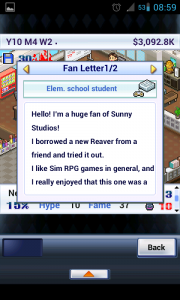 You can use research points to use item boosts, level up employees or increase the chance of breakthrough. Item boosts are special items which you can buy from a traveling salesman who visits every now and then. There’s one for every stat and it has infinite usage (as long as you have 30 research points), but each consecutive you buy costs way more. I started out at a couple of hundred and now, it costs over five million. Also, each consecutive boost you use on the same game has a reduced effect compared to the last one. I think it caps out on 3. 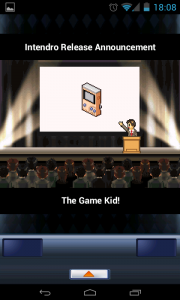 The most popular handheld ever. Please don’t sue!

Outside of all of that, you can develop your own console, but you need an engineer for that, and I didn’t get one of those. You can also attend game conventions to increase the number of fans and promote your game, or you can attend gaming award ceremonies, where your game can win a trophy and some money. I already got a few of those, mostly for good design or graphics. I also got one for “Worst Game”, but I try not to think about that one.

How Is Sunny Studios Doing

Recently, Sunny Studios bought the license to develop on the Sonny PlayStatus, due to the feelings of nostalgia their CEO got upon the console’s release. This caused them to nearly go bankrupt, but quickly paid off after their Table Dungeon game developed for the console hit record sales and broke #1 on the charts. 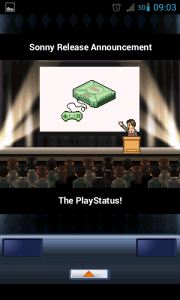 My first proper developer licence. It cost me ten million.

Right now, Sunny Studios is trying to develop more games, while training their employees, hoping one of their games would hit the Hall of Fame status, so they could develop sequels for it. They already have more than 32 games behind them, but none of them were that big. Their current and top capital is at around 12 million. 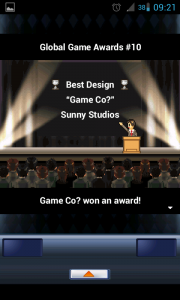 I got best design!

I’m not sure why, but Game Dev Story sure is fun. 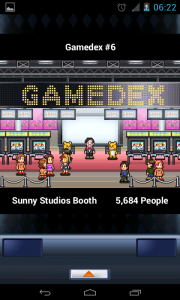 There’s only one convention in Game Dev Story – the GAMEDEX.