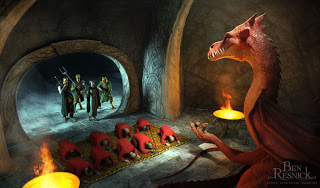 The Spire Fortress lies on the path to the Abyss. It was under bandit control so I had to clear those out. I’ve found the emissary from the dragon inside and he said that there is another dragon servant somewhere in the Abyss and he is the one that has the message for me. I also killed a bat demon there.

I went to the Abyss, first did a few side quests in Spire and then went to Baghra. The warlord there has a few screws loose and doesn’t let anyone out of town. Even the farmers can only work on their farms and are forced to sleep in town. I’ve found out from townspeople that he is holding the dragon servant captive somewhere outside of town. I managed to find the prison, free him and kill a bunch of guards on my way out.

Everything else in the Abyss seems a bit too difficult so I brought the message back to the cycle to get deciphered. While this is being done, I got three new missions in northern Avernum, around Silvar and Cotra. This is where I will be going next.

After doing some minor side quests with what little time I had yesterday, I decided to progress the main quest a bit today. I went to Patrick’s tower, where the archmage Soldberg is trying to develop a strain of mushrooms that would be immune to the plague. After exploring the tower as much as I could, I went to the levels bellow, where the new mushroom strains are being bred. I had to kill a strange fungal creature and release the blight in the area to see if the mushrooms are resistant. This failed, so the solution of the problem will have to be found elsewhere. When I reported this to Soldberg, he mysteriously said that “it’s time”. Time for what, I do not know.
After returning to the castle, the commander had a new mission for me. I was to go past the blockades in Almaria and solve a problem with the Great Portal. I decided not to do this yet, as I still have to help Gnass. Before doing that though, I decided to explore the rest of the Great Cave. I managed to stumble into a lair of giant rats near Patrick’s tower. The magic from the tower caused the rats to mutate so I had to kill their hive queen and stop her from hatching more rats. Yes, hatching. I said the magic caused them to mutate.
Anyways, now I’m off to explore a mine that I bought from a guy near Darnham.
EDIT: The mine will have to wait. There is a ghost in there that, when killed, splits into three vengeful shades and another ghost. I managed to kill him 3 times and he split every time. In addition to that, the shades hit like a train.
After escaping the mine of doom, I decided to go save the son of Gnass’ chieftain. It wasn’t that hard because my party was way overleveled for that area anways. Also, I did a few side quests and explored pretty much the entire area of the Great Cave. All that’s left is the area west of Fort Remote. Anything other than that is still too hard for my party, so after checking the place out, I will go to the Eastern Gallery where the next part of the main quest is.

I’m a big fan of the series, but somehow I missed the release of what is supposed to be the last game. If you played any Avernum game, there is not much to say about it in here. There are no towns this time, and I can’t remember if there were in Avernum V.

Everything is one giant map, with a separate huge map of the various caves and lairs that you visit. This time, a savage tribe of Slithzerikai is threatening the Avernites, and some strange blight is destroying all of their food. People are leaving Avernum and fleeing to the surface. My party is just a group of soldiers whose job is to kill rats under the main food storage for all Avernites.

After investigating a storage breach by goblins and killing their leader, I find out that the Slithzerikai are somehow behind it. This sends me The Castle where I get my main mission. My job is to stabilize the situation in The Great Cave and try to find out as much about the Blight and the Slithzerikai as possible while doing this.

Long story short, I solved a few side quests, learned how to use the portals in various towns so I can travel faster, and resolved a food hoarding situation in one of the major towns. My characters got a few levels, and I already managed to acquire some nice gear, but the game is just starting. I just hope I will get the chance to play it some more before the exams start again.