Well, that’s another Android game that I’ve marathoned through. It took me over ten hours to get to the ending, but there’s little to write about while playing Fiz, which should explain the lack of articles.

Fiz is kind of a skinner box

It really is. It doesn’t provide compelling or emergent gameplay. For the most part, you’re repeating the same set of actions over and over again, each time for bigger rewards. This is all wrapped into a nice and comfortable interface and slightly enriched with a clever, but shallow story and average-quality puzzles that are just barely compelling enough to get through. 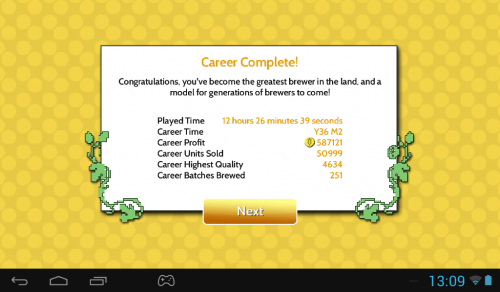 On the surface, it’s a simple simulation game. You brew bier, pick proper pricing and try to remain profitable. Once you figure out the principle, though, it’s very difficult to go under. The underlying mechanic is very simple, actually. You will be profitable and sell out all of your stuff as long as you follow a set of simple guidelines:

This sounds complex, but the principle is simple.

So basically, you make a beer for a market that wants that beer and then just keep adjusting pricing until it’s optimal. Once yo do it, write it down and you know what to do on that market.

Of course, there are worse and better markets out there, so pick one or two or three and stick to those if you want to get as much money as possible.

The story missions tend to mess with your plans, but only slightly. There are several objectives throughout the story where you have to get a certain amount of profit on a certain market. In that case, you simply pick that market and keep making beer for that market.

In the late game, you end up making faster than you can sell, so pick another market and alternate between those 2. Pick three if you have to. 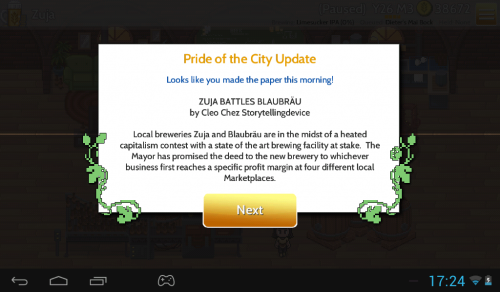 Pictured: Pride of the City is a four part “major quest” which requires a certain amount of profit in four different locations. It includes the Vaterland brewery.

There’s a special case of the Vaterland brewery. I can’t remember how much it was, but you need to make a certain amount of profit there. The problem is, it’s a special, seasonal market, where the popular beers change periodically. This means you need to do research for every season. The problem with Vaterland is that the seasons change every two months, so you’ll probably end up needing a year to do the research before you can actually start profiting. Well, you could do that, or you could simply look into the following list…

There, I just saved you a year of gameplay. Take a look at how long it takes for your guys to brew a batch and try to brew it so it’s just about done when the appropriate season starts. 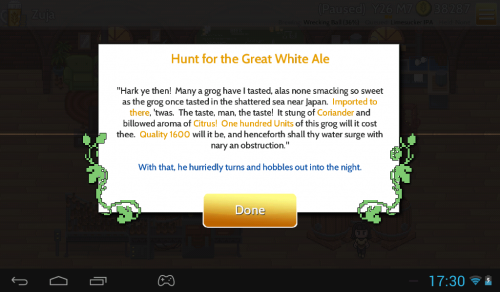 Pictured: Hunt for the Great White Ale was the most difficult quest for me. I was having trouble figuring out which recipe i need to use. The name of the quest is sort of a hint for the name of the Ale.

There’s another thing to note about researching seasonal markets. It doesn’t matter when you started the research – it only matters when the research completes. This means you can do the cheaper research that takes longer. Just start the research at slightly less than a month before the season changes and you’ll get it just as it does change.

In any case, once I’ve completed the last few qurests, all that was left was the brew the ultimate cure-all brew – Fiz. This was also a quest where I had to find the recipe for it and then gather the required ingredients by completing a different smaller quest for each ingredient. Fur progeny, here are the ingredients and the requirements for them: 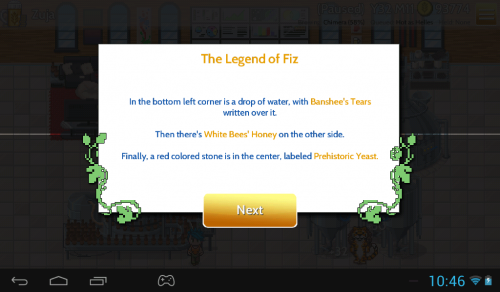 Pictured: Once the Legend of Fiz quest is completed, you get the recipe added to your list.

With all those ingredients and the recipe, completing the final quest is just a matter of making a few clicks and then waiting a few months. 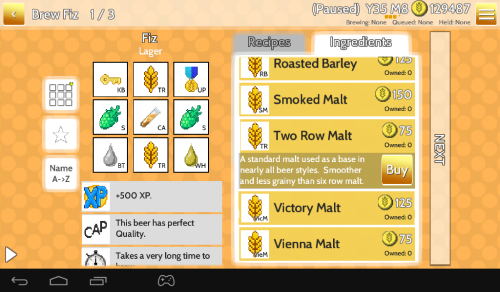 I was given a moral choice once I brewed Fiz, went with the good option and that was pretty much it. 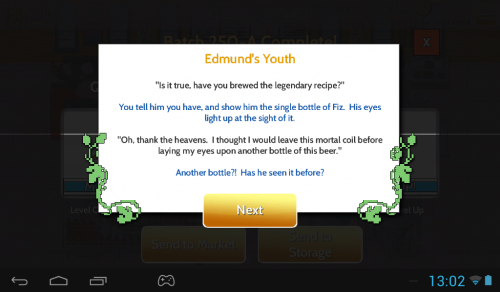 Pictured: Once Fiz iz brewed, you get to decide who to give it to.

Yup, we have a New Game+, and I probably won’t be playing it. In a new game, you get to keep your old employees and (I believe) recipes and that’s about it. You also get to unlock a few extra secrets, including an amazing secret employee. 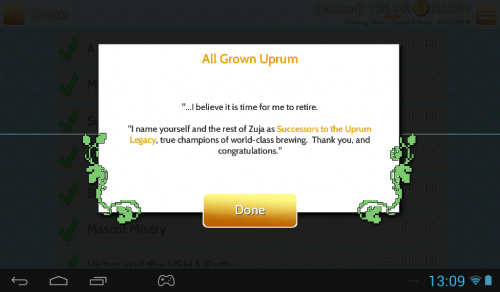 Pictured: The final quest, required to complete the game.

I don’t think I’ll be playing New Game+, though. Though it’s slightly more complex than  the usual Kairosoft game, Fiz is still a simulite, not a proper simulation game. The drive to play it comes from buying upgrades and going through the story. I did all that, so the only drive remaining is to get that last employee and complete the last few achievements. For me, that’s not a big enough drive to invest another ten hours.

With a proper simulation game, the game itself would be the drive, but we don’t have that, sadly. I wish we did, but we don’t.

That being said, for a buck it cost me, this was a pretty cool little game. It was well worth my money and the time I’ve spent with it.