I’ve been playing a lot of Game Dev Story over the past few days and actually managed to get to the end of my second game. Suffice to say, I’ve beaten my first attempt by a long shot. I also wrote down a lot of things, gathering a lot of data about the game.

In my first Game Dev Story game, I spent money conservatively, being careful not to go too low. This time, I spent every cent I had as soon as I got it. I kept hiring better staff and training my existing staff, I bought licenses for the good consoles as soon as I could and I invested heavily into advertisement. 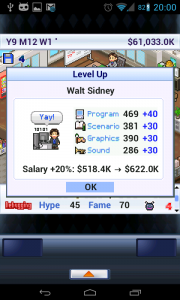 Leveling a Hacker ends up being worth it on Level 5.

I managed to hire 2 Hackers quite early on and I got my first hall of fame game around year 6. I also got myself a Hardware Engineer and developed my own console by year 11. I named it Ultima. Basically, I did almost everything I did in my first game, but I did it earlier, faster and to a larger degree.

I also made a lot of sequels, since they did end up selling well. My two most popular franchises were Amorous – dating life series and BattleBots – a series of robot shooters. Other than that, I made a lot of card games, RPGs and Simulation games. 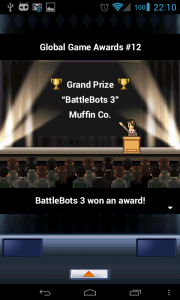 Ultima ended up being my best move because it was the most popular console pretty much until the game ended. It was only overtaken by GameJohn for a short time after it was released, but it came back from it soon enough.

I wrote everything down.

I decided to write things down, so it could possibly serve as a reference for myself in the future, or maybe even someone else. I wrote down good and bad combos, basic stats, games I’ve developed and final game character stats.

This probably won’t be very helpful, but I had some weird games, so I wanted to mark it down somewhere. Here are the games I developed, their genres, themes and scores, starting from sometime around year 6.

So I made a lot of games and a lot of them were sequels. I also named a few in such a way so that it seems as though they belong to the same franchise, even though they aren’t direct sequels, such as the Story series, the Quest series, or the Breeder franchise. A few of those were also puns and the last one was named Game #74 simply because I taped “Ship” before naming it. This should also tell you I made a total of 74 games while managing Muffin Co. 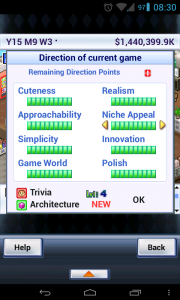 I maxed out the direction points around year 16, I think.

The first two games on the list were developed for the GameKid. Then I switched over to the SuperIES with Pirate Pursuit. I stayed with the Super IES for years, until the PlayStatus was released and I developed SingIt for that platform.

By year 11, I developed my own console, Ultima, which was a 64-bit BD-ROM platform, so starting with BattleBots 3, I only ever made games for the Ultima. It was only for a short period in year 19 that I switched to the GameJohn with Pookemon, but the sequel to that game, Pookemon 2, was developed for the Ultima again. 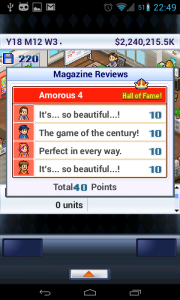 I got a perfect scoring game to. It was a Dating Life game.

Before I briefly switched to the GameJohn, I developed my star game on Ultima – Amorous 4. It was my only game to ever get a perfect score, though many came close.

I also wrote down employee stats and I did it in two ways. First of all, my primary method of training my staff was the “Anime” training. It’s cheap, adds to all four of the stats and works quite well at the start. I basically used the Anime training on each of my employees until they stopped gaining points from it. Because of that, I wrote down their Anime training maximums. Of course, I only did this for the employees I actually hired. A lot of them I never even tried out. The job field states the job the employee had at the moment I maxed out their stats with Anime training. Some of them changed their jobs from the one they started with, but most of them didn’t.

Writing all of these down made me sure of one thing – there are definitely better and worse employees. While you can keep training stats if you get the random “super parameter up” event while training, the basic training maxes out differently for each employee, so they definitely have different potentials.

UPDATE: Trevor, in the comments below, also let me know that his Francoise was much, much better, as noted in his screenshot: So while there are probably better and worse characters, there’s also a lot of variance in how they turn out. 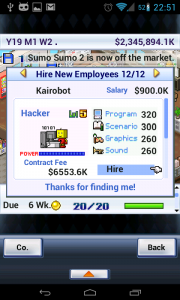 The special characters aren’t worth it in my opinion.

Francoise Bloom and Walt Sidney are the two employees you should probably hire immediately for a huge short term boost and a good long term investment. Sophie Kairo might seem on the low side now, but she has almost Hacker level stats while being only a Director, so she ended up being the ultimate employee by the end of the game. This is probably due to the fact that her name is based on the name of Game Dev Story’s developer – Kairosoft. 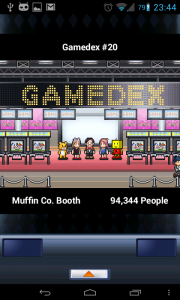 This was as high as I got with GameDex visitors.

My priority with employees throughout the game was to first max out their stats with anime and then slowly level them through their careers until they all became Hackers. After that, I was rolling in money, so I further trained them using the “Long Trip” training until I maxed out their stats that way as well and this is when I wrote down everything again. Basically, what follows should be the maximal stats of each employee I had employed when the game was over. Again, they can technically get even higher with “super parameter up” events, but these are the maximums for the regular training outcome.

Again, obviously, not all employees are made the same. Some are a bit weaker, some are stronger. Some are cheap, some are extremely costly. As a general rule, if you manage to hire a Hacker directly, you’ll end up paying him much less than you would an employee who was promoted into a Hacker. The same goes for any other higher level employee.

The thing with job requirements is, you don’t need the base job levels maxed out if you already have a higher up job level. For instance, if you happen to hire a Hardware Engineer, it doesn’t matter what his other jobs are, as long as you max out Hardware Engineer, you can turn him into a Hacker. This means that you’re better off financially if you hire higher level employees directly and then turn them into hackers later on, because each promotion bumps their salary up by 20%. Basically, you get a cheaper Hacker if you start higher up in the career tree. 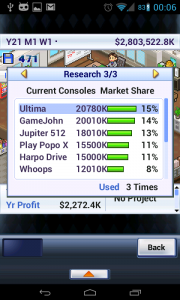 Ultima ended up being the most popular console during the last 9 years of the game.

Also, I wanted to get all the special characters of the game, such as Grizzly Bearington and Kairobot, but I ended up giving up on that. Mister X and King Ackbar are the two special characters I did hire and they obviously aren’t anything special compared to my other employees, so I didn’t see a point in hiring the other guys. 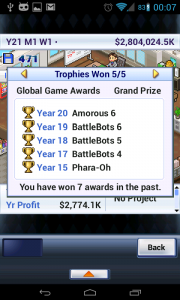 Finally, I also wrote down the combinations that ended up being good or bad. Based on my observations, there’s actually five levels of quality at play here. There is the neutral grade, the good and bad grades and the very good and very bad grades.

I was researching combinations for a bit and a lot of online sources seem to disagree with my observations. There’s definitely a chance I’m wrong on some of the combinations here, but I’m pretty sure I can’t be wrong on most of them. Still, you should take it with a grain of salt and maybe visit some other sites instead of completely relying on the information here.

I broke all Records!

As CEO of Sunny Studios, I barely scratched the surface of Game Dev Story. With Muffin Co., I reached Sunny Studios’ level of success within the first five years. By the end of year 20, I was worth billions. It’s not a complicated game and it’s easy to succeed, but there are a few tips I could have used on my first run through the game 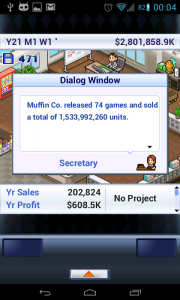 Much, much better than Sunny Studios.

I maxed out a lot of themes and genres, I completely maxed out on my direction points and I got a perfect scoring game. The only thing I could technically do in Game Dev Story to further progress is to max out each and every genre and theme. I’m not going to do that. Instead, I’ll move on to another game now. I consider Game Dev Story to be fully completed and consumed.