I decided to start a new game of Game Dev Story, just to see which parts transfer over. For that, I needed to found a new company – Muffin Co. It’s time for cold, hard business.

I Decided on a Focus

With Muffin Co., mostly due to the name, I decided to focus on cute, simple, casual games. Since all of my direction points transferred, I could pretty much max out most of these directions. I was wrong, though. 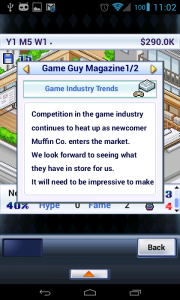 Soon after you start, there’s some flavor in the form of a news article.

How to get Direction Points? 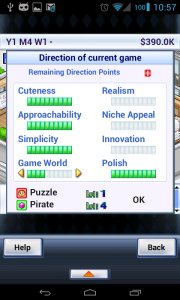 So I started with a Puzzle game with a Pirate theme. It ended up being an unorthodox theme, so I got a penalty for that one, but with an overall total score of 16, it turned out quite OK. I think it was even better than the first game of Sunny Studios. I called it Pirate Pop. 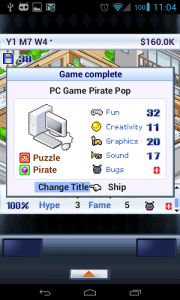 Pirate Pop was the first game Muffin Co. ever made. Who knows what will come out of it.

I had to dip into my emergency fund because I tried to hire better staff, but the sales quickly got me out of the negative and into the high positives. I started developing my next game – a Ninja Racing game. I think I’ll name it Ninja Go. 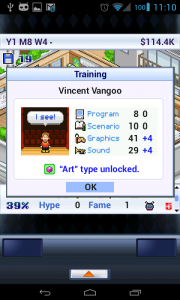 Vincent is currently my strongest character.

During development of Ninja Go, I decided to promote my new designer, Vincent Vangoo, and also invest into his professional education a bit. He has a nice energy pool, so he might be worth keeping around for a while, unlike the rest of my staff. Though I’m making happy, fun games, Muffin Co. will be a cold, business environment.

I Decided to Buy a License

Around the time I got into the testing phase with Ninja Go, Senga announced their Exodus console. Since I was an Intendro guy last time, I decided to go for Senga this time around. I bought the license as soon as I was able to. 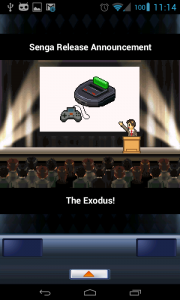 I actually owned a Genesis, so this feels closer to home.

Ninja Go got released and it was scored a total of 15 points. That was extremely disappointing. Still, I got some sales, but it was nowhere near the 400k I needed for an Exodus license. My next game was going to be an Animal Life game. I’ll name it MuffinPuppy, because I decided this means a virtual pet game. 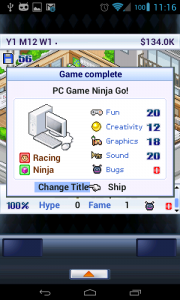 Ninja Go broke some records, but it was scored poorly.

Ninja Go broke sales records, even though it got bad reviews. I also managed to two more direction points from having leveling up either Animal or Life. I can’t remember which one it was, but it was a good combination, because I got two level increases during development. I think I’ll start keeping track of those.

I gave my designer another promotion to up his stats a bit right before MuffinPuppy got released. The sales of Ninja Go! were record breaking, so I had more than enough for an Exodus license. MuffinPuppy also ended up being ground breaking, but it only got a total score of 16. Still, it was a good combo, so it was bound to sell well enough. I decided to risk it and finally buy the license.

I had enough for a license, but not enough to fund the development of a proper game, so I ended up doing some contract work for a comic book company until the sales of MuffinPuppy come in. 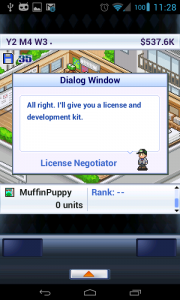 Around this time, the traveling salesman arrived for the first time, so I bought a fun boost for 200k. The sales went really well, so I still had enough to fund my next game. Once the contract work was over, I went for it. It was going to be a Reversi Puzzle game. I gambled on the hope that this would be a good combo. It was! 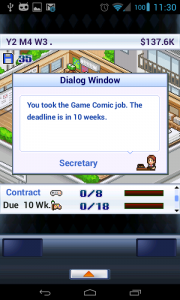 It’s always better to do a contract than just sit around, waiting.

I’ll let you know how it went next time.

What Transfers to a New Game in Game Dev Story?

What indeed. The point of this new game I started was to figure out what exactly transfers over when I start a new game of Game Dev Story. The answer isn’t that simple. 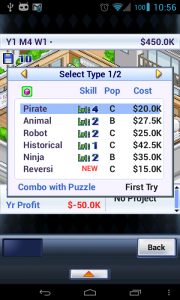 I have yet to unlock most of the max level themes I had in the last game.

The genre and theme levels do transfer, but the available genres and themes do not. You need to unlock them all over again, but from what I can tell, once you do, they start out at the level they were at in the last game. Regardless of that, all of the direction points do transfer.

Other than that, nothing else transfers. You get brand new employees, an empty game history, no licenses, and there’s no inventory transfer.

So, one more time:

So there you go. Now we know. I might be wrong about some stuff, though, so I’ll edit it in if I get any new findings.