I said there’d be less writing and more playing, but I honestly didn’t plan to write just two reports about Vandal Hearts. Still, this is exactly what happened. After about thirteen hours, Vandal Hearts is won.

The story was pleasantly refreshing.

I wont and can’t really say Vandal Hearts has an amazing story. It doesn’t. It’s decent at best and it suffers from some mistakes early story-focused games tend to have – it often doesn’t make great sense, it drags on in places and jumps to quickly in other places.

Still, it was refreshing. It wasn’t a typical heroic epic and felt more realistic, as little sense as that makes, considering it’s about magic, prophecies and time travel. Somehow, the character’s seem more down to earth and less out of this world. 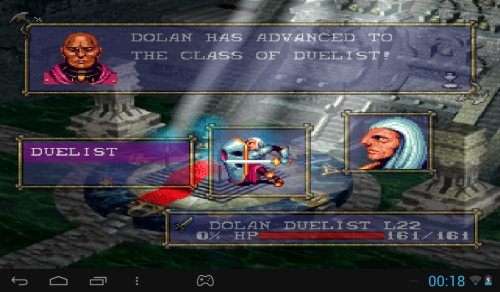 Character designs are pretty cool, if you ignore the faces.

I can honestly say I wasn’t at all sure how it would fan out or how it would end, which is rare with most games I play.

It did get off the rail a bit during the last chapter or two, but overall, the story of Vandal Hearts was a pleasant experience.

The game is basic.

As far as strategy RPGs go, Vandal Hearts is a very basic game, which can probably be attributed to the early release year, both in relation to the PlayStation console and the SRPG genre in general. I’m aware there were several SRPGs on the earlier consoles, but overall, it was a very young genre at that time and I’m having a hard time thinking of more than a few games from that time that were much more complex…

… yeah, that’s what I wanted to write at first. Then I did some research and as it turns out, there was plenty of SRPGs before and around the year Vandal Hearts was released (1996) that had a lot more content and complexity. 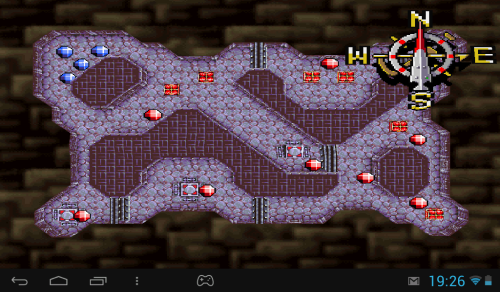 I can’t say I really used this top-down overview map of a level. I almost missed it completely.

Vandal Hearts is simply basic for the sake of being basic. There is no character recruitment, no class unlocking, few secrets and secret items and very little to do other than go through the story.

There is basically one side quest in Vandal Hearts. You can find several items, seven, I think, which allow you to go through certain trails at a dojo in any town. Some of these items are drops, some are found in chests or buried and some can be traded with NPCs for, in exchange for other found items. If you do all seven of these trials, Ash, the main protagonist, can get a third class advanced and become very strong. I didn’t do this because each and every one of these items is completely missable and I’ve been playing without a guide. 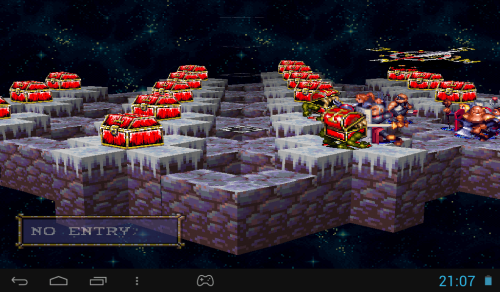 This is the only challenge level I event attempted. All those chests are mimics.

Other than this one side quest, you can find ultimate equipment, stronger than anything you can buy, in the later half of the game. I found a few of these and probably missed the majority for the same reason as the trial items.

Outside of this, there is nothing more to Vandal Hearts. There are no side missions, side levels, secret characters, classes or anything of the sort. There’s the six chapters of the main story and nothing more.

There is a fix amount of characters in Vandal Hearts and there are no generic characters you can recruit. Each of them has a name and a part in the story, as well as a starting class, taken from a list. Since there’s so few of them, I might as well list them all:

Each class gets to upgrade twice. At level 10, you are able to branch into one of two choices which then further get upgraded at level 20. The hero class is special as it doesn’t get to branch out. Ash can upgrade to Champion at 10 and further to Paragon at 20. If you do the side quest, then you can upgrade for the third time, to Vandalier. 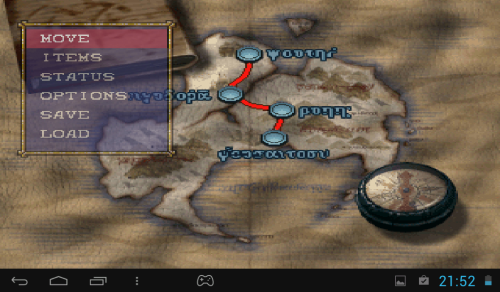 A soldier can pick between swordsman and guardsman at 10. A swordsman further upgrades to duelist and the guardsman becomes a dragoon. Archers work similarly. At 10, an archer can become either a bowman or a hawknight. At 20, a bowman upgrades to sniper, while the hawknight becomes a sky lord.

Mages and priests are somewhat strange here. At 10, a mage can become a sorceror or a monk. A priest can also become a monk at 10, with his other choice being a bishop, so there’s overlap between these two classes. A bishop later becomes an archbishop, a sorceror becomes an enchanter and the monk becomes a ninja.

There’s a not completely typical A is strong against B but weak against C mechanic in Vandal hearts. There is a total of seven types, indicated by the symbols of a fist (monk, ninja), sword (solider, hero, swordsman, duelist), bow (archer, bowman, sniper), wings (hawkman, sky lord), shield (guardsman, dragoon), ankh (priest, bishop, archbishop) and staff (mage, sorceror, enchanter). In reality, though, there are effectively five types.

In one sense, it’s a very strict mechanic. If you apply the weakness correctly, you can almost kill any enemy with one attack. With a level advantage, the almost part almost completely goes away (see what I did there?). 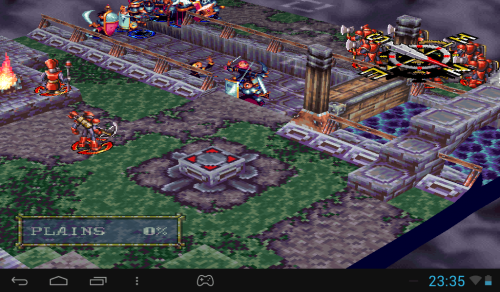 If you do things right, you can drown a lot of enemy troops in this moat. Salamander kills them before there’s a chance for that, though.

In another sense, though, it isn’t completely strict. A monk can use offensive magic to, which makes him strong against armor, even though armor is also strong against them. Also, everyone tends to do a large amount of damage to everyone regardless of weakness. A weakness further increases this, but the reality is, two snipers will probably have no issues killing an armored opponent, for instance. Heck, even one might be able to do it, considering armor is extremely slow and has a low range of motion.

Overall, the mechanics and numbers Vandal Hearts deals with makes it feel more like a puzzle game than a strategy RPG. There are two main reasons for this. 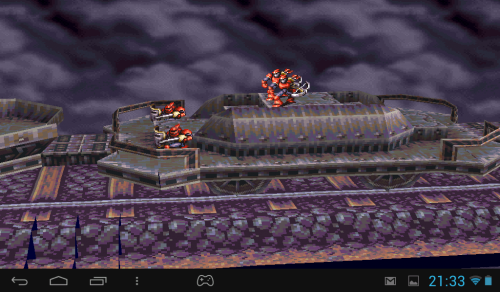 The engine allows for some dynamic levels – this one happens on a moving train.

The AI is ruthless. Everyone, with ranged opponents especially, tends to gang up on your weakest and easiest to kill character, with no exceptions. If you move one of your guys too far forward, the chances of them dying within the next enemy turn are almost 100%.

There was an ambush map in the early game. If you immediately attack, the enemy retreats and you lose. If you wait for the right moment, then you have a chance to kill them. The enemy immediately sends a few units to try and run away, though and if you don’t approach this correctly, you will never catch up with them. The correct thing to do is to send the priest to the south, so he can block the passage, as soon as you attack the main enemy force. In that case, the units that try to run won’t be able to and you can pick them off one by one.

In a late mission, there’s a bridge you start at. If you stay on top of it, the enemy archers will pick off your weak units, one per turn. If you try to advance, you might win, but you’ll still end up losing units. The best thing to do is to fall back across the bridge. In that case, you’ll destroy the smaller enemy force easily, and then the other enemy units will start coming at you in small and manageable groups.

In another later mission, an enemy transforms into something powerful when the battle is almost over. This new form starts using a spell that severely damages everyone on the map. I actually did the incorrect thing in this one. I slowly approached and used expensive items that heal everyone on each turn. The correct thing to do is to immediately close the gap with the enemy, because it stops using the devastating spell once you get close enough.

This needs to be said one more time – the AI is ruthless.

Magic is overpowered. A late game spell, Salamander, hit’s a large part of the map, so the basic strategy is to use the two enchanters (I had two and anyone else should have the same) to hit as many enemy as possible, then use archers to pick off the spell casters and the rest of the group to kill as many other units as possible. The next couple of turns are then used to clean up the rest.

It’s the same for healing magic. A late archbishop spell heals each and every one of your units on the entire map to full health.

Items are also overpowered. Once you buy all the gear, there’s plenty of money left in the last two chapters to keep your guys stocked up on items that heal your entire army to full, same as the archbishop spell. It’s one thing to have one or two characters being able to do that, but it’s a whole other to give everyone that ability. 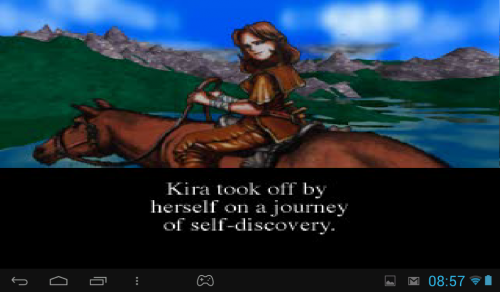 You get a “what happened next” slideshow during credits.

There are some cheap twists in some of the battles. I lucked out and managed to get out of both of these, but I can see how it would be annoying to get yourself ambushed by freshly arrived enemy units when there was absolutely no indicator this would happen until it actually does. There’s one level I especially remember, where I just cleared out most of the enemy’s army when another troop practically appeared on top of my wounded units. Somehow, everyone managed to survive and I fixed it within a turn, but it was extremely close and extremely annoying.

I can’t believe I forgot to say this, but the art style is extremely weird. I’m still not completely sure if it’s just bad art or intentional styling, but it looks amateurishly drawn. That being said, this amateurish style is completely consistent throughout the game, so I’m strongly leaning towards it being intentional. I’m not sure I like it, but I can’t really say I dislike it either.

The graphical effects should also be mentioned. There are awesomely cartoonish fountains of blood spewing out of each enemy you kill. It sort of contrasts with the serious theme the story is trying to serve, but it doesn’t take away from the experience for me.

Vandal Hearts was an enjoyable game for me, all 12 and a half (or closer to 15, if you count the reloads) hours of it. It wasn’t what I expected or hoped to get from an SRPG, but what I got instead was enjoyable none-the-less.

I saw the end scene and the credits started rolling, with a song. IN CROATIAN! I absolutely had no idea whatsoever and was extremely surprised. Then I got hit with a flashback. There was a review of Vandal Hearths in a Croatian magazine and there was a mention of an ending song sung by a singer named Jadranka Stojaković. It’s weird how memories work sometimes.

The game was released not long after the war in this area was over, so I wouldn’t be surprised if there’s some relation to that, since Vandal Hearts is also about war.