I’m thinking about further reducing the amount of articles I post. It’s getting to a point where I play through a big chunk of the game, have a hard time figuring out what to write about and then end up producing a lot of worthless padding. Vandal Hearts is where I’ll try a different approach. It’s a fun game for now, but it’s a very basic SRPG, so there isn’t much to write about if I leave out the story.

So let’s get the story out of the way

It’s about politics, evil and power-hungry politicians, and a bunch of good people caught up in the middle of it. At least that’s what the story looks like during the first two chapters. It takes place in a slightly darker than usual fantasy world where monsters are real monsters and people are ACTUAL monsters. 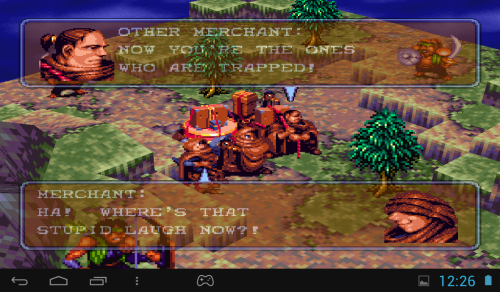 Vandal Hearts starts with an intro mission, introducing the main character and his two friends. 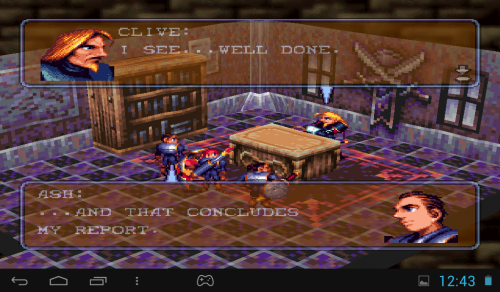 The story is told mostly with in-game scenes.

Ash is anything but silent. His views on things are clear and he’s a typical hero – always trying to do the right thing. The story has plot and intrigue, tragedy and love, but it all feels ever so slightly more mature than the average JRPG story of that time. There are still some naive moments and a lot of it is predictable, but overall, it leaves a good impression.

If you aren’t sure what a strategy RPG is, it’s a JRPG offshoot where you have your typical JRPG characters and classes, but the game takes place on a world map, where you roam from location to location, fighting strategic scenarios. You have a select few units, most of them are named and full-fledged characters and you spend a lot of the time training them. A good example of such a game is Final Fantasy Tactics or Tactics Ogre. 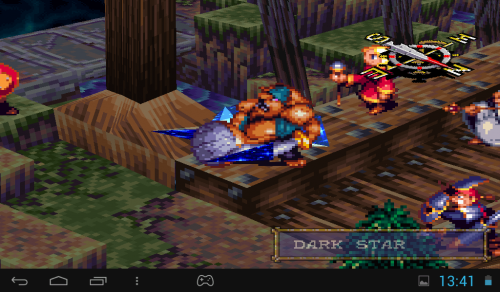 Magic doesn’t look too impressive yet, but it’s good enough to be useful.

Some of these games are simpler and some are extremely complicated. The way it looks like right now (I’m two chapters in), Vandal Hearts falls on the simpler side of the river.

If I understood it all correctly (I haven’t gone through all of it yet), the game claims there are 7 classes, corresponding to 7 powers. I’m not sure how all the classes are called, but the powers ae Knight, Armor, Archer, Airman, Mage, Priest and Monk. 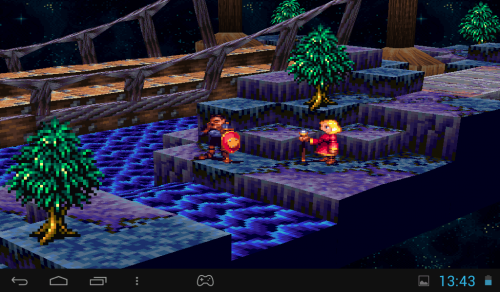 Hints of romance are already starting to show.

This doesn’t completely match up with what I have up to now. I had the Ash, who has a special Hero class, a soldier and an archer and was later joined by a mage, priest, another archer, then later still by one more soldier, priest and archer. Each of these classes was able to receive an upgrade at level 10. 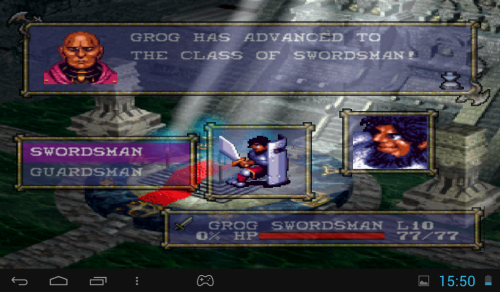 A soldier can become a swordsman or a guardsman.

Ash was only able to upgrade the Hero profession to Champion, but the other classes were able to decide between two branching paths. Soldier can become Swordsman and Guardsman, the Archer can become a Bowman, or a Hawkman, which is a flying class, the Priest can decide between a Bishop and a Monk, while the Mage can be a Sorcerer or a Monk. The game also tells me there will be another upgrade at level 20. 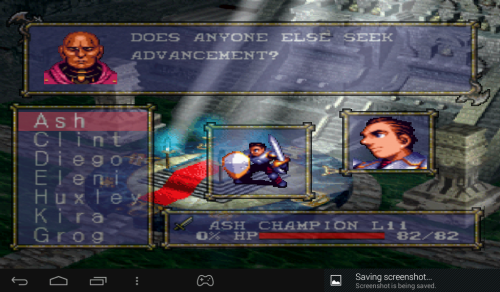 Ash has his own hero class, which becomes a champion at level 10.

The basis system is rock-paper-scissors. Melee units beat archers, archers beat air units and air units beat melee units. Apparently, mages, armor (whatever that is, maybe the guardsman) and monks mix this up somehow, but I haven’t yet figured out how.

Battles take place on the usual 3D rotating tile map. Height is taken into account when it’s decided how far you get to move and positioning and attack direction do seem to affect the outcome of an attack, but there is no obvious indicator how it works. 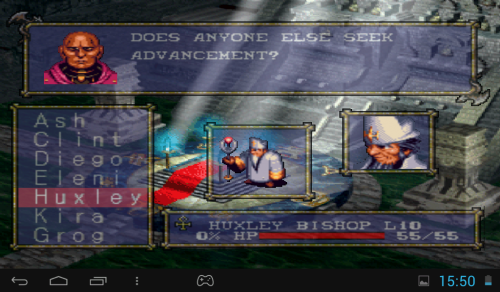 I decided to go with bishop for my first priest.

Unlike most SRPGs I played, the characters do not turn in the direction the attack came from once they get hit, so you can’t abuse that mechanic to make every attack go from the back. 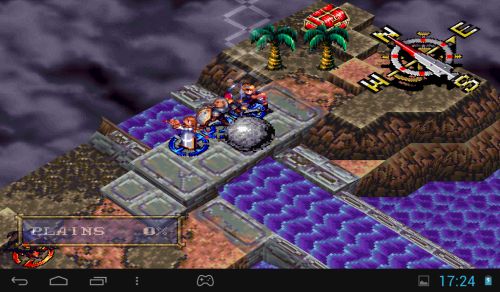 Just because you can push a boulder doesn’t mean you should. This one serves to create a bottleneck.

It’s also important to have your allies surround the enemy as you’re attacking it. If you do this, the word SUPPORT flashes over their heads and you deal more damage with your attack.

Magic is in the game, but for now, it’s not very flashy and MP seems a bit limited. Healing is important, though, especially healing via a priest or a monk, since restorative items are kind off expensive. 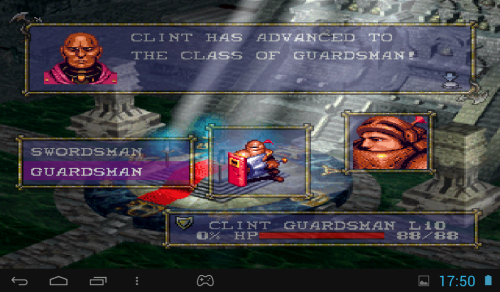 Guardsman is slower but stronger than a swordsman.

Each map can contain secret items, which you can find by using the Examine command. It’s a good tip to take a look at the map at the beginning of every battle, because most of these secrets can be somehow seen on it. For example, one of the tiles might have a small crater graphic on it, or stand out in some other way. It also looks like you can get hints about some of these secrets from the taverns in nearby towns. 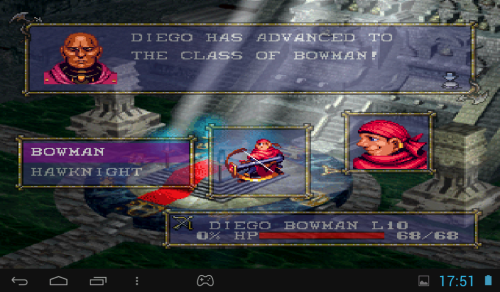 Bowman is an upgrade to the archer. The alternative is a flying class.

Each map also contains interactive objects. You can find boulders which you can push downhill into enemies, damaging several at a time, or you can push switches which open up new areas of the battle map. There are also blocks you can push around to block enemies’ paths or reach chests. Yes, there are also treasure chests. You can open them by attacking them. 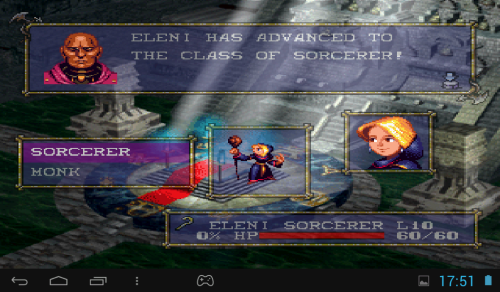 A mage can became a sorcerer or a monk. Sorceress was the obvious choice for me.

Outside the battles, you move from location to location via a world map. This is how you advance the story or go to towns to buy equipment, visit the tavern and upgrade classes at the local dojo. If there’s a way to revisit old battle locations later on in the game, I haven’t gotten to it yet. You can go back to previous cities within a chapter, but seems to be it concerning backtracking.

I’m in chapter two and three new characters just joined me. Ash, Diego and Clint are who I started with. Ash is now a champion, Diego a bowman and Clint a guardsman. I also have a sorceress, a priest, a monk, hawkman and two swordsmen. 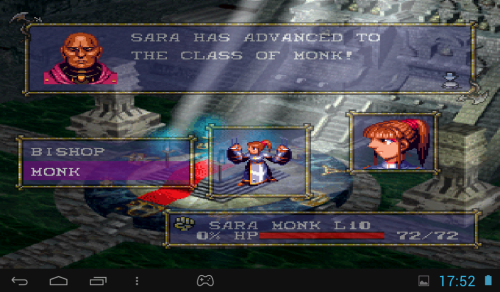 Monk is the alternative to bishop and sorcerer. They can fight, use some offensive spells and heal.

Since Ash is the main character, losing him means it’s game over in most battles and this actually did happen once. Him being a champion means he gets to move further than most other characters, so I tend to get him surrounded. Luckily, he also has a self-healing ability, so it isn’t as bad as it sounds most of the time.

I think I probably missed most of the secret items, but I did get a few. The only problem is that I keep forgetting to use them, even though it sounds like they might be of the artifact type – you can use them more than once, or possibly even as many times as you like.

One of my archers, Kira, managed to get herself killed in the last two battles, so she’s still level 9 and her class hasn’t been upgraded yet. This annoys me somewhat, but she’ll get there in the next fight, I hope. 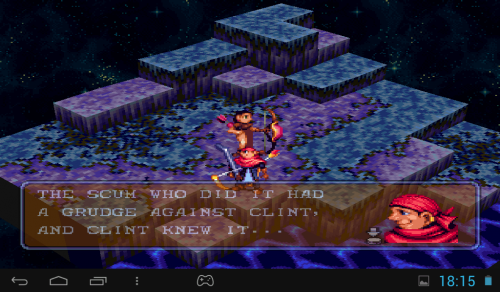 Characters get flushed out slowly over time.

The AI seems a bit basic. I’m not sure if the battles are scripted that way or if the AI is actually lacking, but it’s often that several enemies stay in place until I get close enough, meaning I get to fight one smaller group at a time if I’m careful. Again, it’s possible the game is actually scripted that way, because the battles have been challenging enough even if this is taken into account.

I usually have enough money to get the upgrades, but I’m not really swimming in it. The last series of upgrades happened in the first town of the second chapter and I ran out of money with one item left to buy. Considering I only bought a single herb and everything else was spent on equipment up to this point, I guess you aren’t supposed to have enough for everything as soon as it becomes available.

I wasn’t forced to pick my starting line up for any of the battles I went through, but considering the amount of people I have recruited, I’m thinking it will become a feature soon.

Right now, I’m on an island, fighting soldiers who somehow transformed into monsters. I’m somewhere over two hours into the game.

Also, the game runs very smoothly on my ARCHOS Gamepad, with all detail enhancing options turned on.