The first Legend of Grimrock was awesome. I’ve seen a lot of people say it’s too easy to cheese it by running circles around the enemies. Those people missed the point and didn’t realize that’s how the game was made intentionally. They wanted a Might and Magic clone. Legend of Grimrock is an Eye of the Beholder type of game. It’s a different genre. Those people are wrong.

Instead of dragging this out, talking about how this element of the game is better or worse, let’s just skip right to the chase. I’ll play for about 15 minutes and describe everything that happened.

I’m about six hours in and I’ve spent the last hour or so exploring a large dungeon called The Ruins of Desarune. I just got out of a series of difficult battles that I got myself in by pushing a switch. The switch opened a door, but it also released a bunch of monsters from their pens, mostly slimes.

Well, time to load the game. 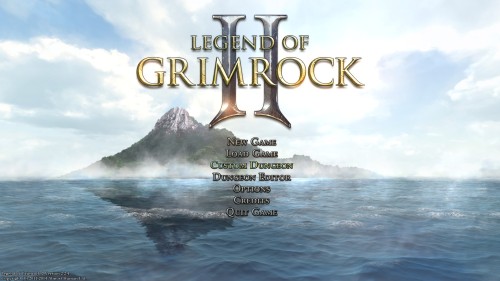 It actually takes a while for the game to load. I’d even say the process is uncomfortably too long. Luckily, the game is good enough for me to endure it.

Actually, it’s closer to an hour, what with me having to write everything down and upload the screenshots, but the effective in-game time is 15 minutes at most.

After accidentally hitting the rest button and sleeping, here’s what my party sees as the game is loaded… 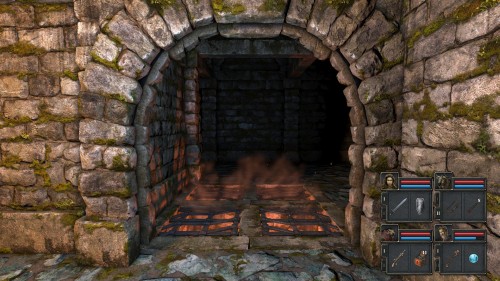 Pictured: The first thing I see when I load the game.

Last time I played was last night, so I have a pretty good memory of what was going on. I killed a bunch of craps in a newly opened area and then got confused because all it contained was a packet of riffle rounds and some arrows. I need to figure out where to go next. Consulting the map tells me there are a couple of possible routes, but first,  I want to check everything out. 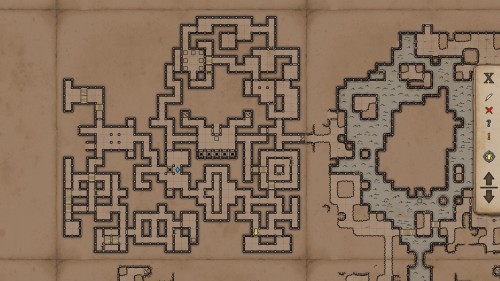 Pictured: The current state of the in-game map.

I spend some time to explore and pretty soon, my light runs out. Unlike most games, in Legend of Grimrock, this is a pretty big deal, albeit less so in the sequel? Why? Because you get a magical item that casts light relatively early in the game, so there’s no need to worry about torches. 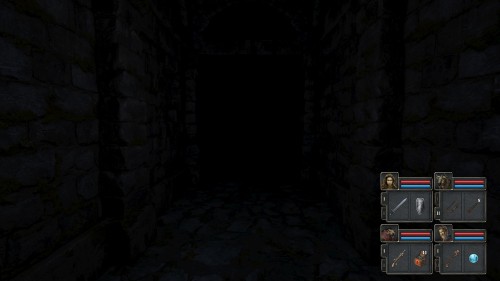 Pictured: This is how dark it gets when your light source runs out.

I use the item, called The Orb of Radiance and I can see again.

Minutes of searching later, I finally find a hidden switch which opens up a secret passage nearby. 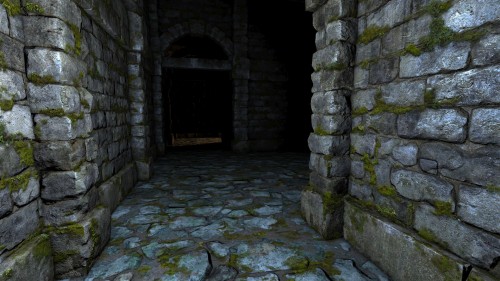 Pictured: A hidden button and the passage it opens.

The passage leads to a ladder, which gives access to a large part of the dungeon. 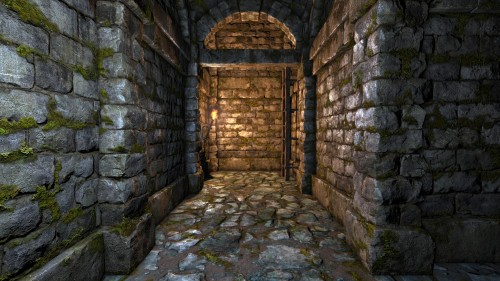 Pictured: The ladder that takes me further.

A ladder or two later and I’m able to see a treasure chest I can’t reach. Something to look forward to. 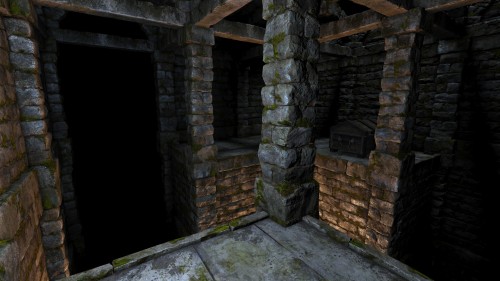 Pictured: A treasure chest just out of reach. It could also be a mimic, though.

Moments later, I enter a room similar to one I’ve been in. There’s a lever I can pull smack down in the center. It usually does something bad such as releasing a monster as well as something good, such as opening a passage. 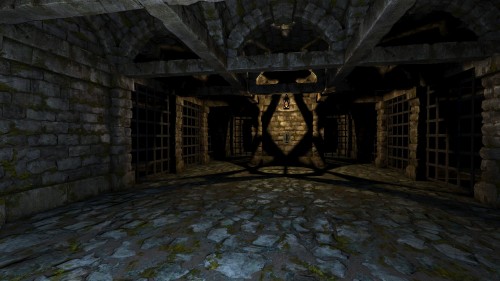 Before I pull it, I take a look around, to make sure there aren’t any monsters in the dark. There are. I count six groups in total, 3 on each side. 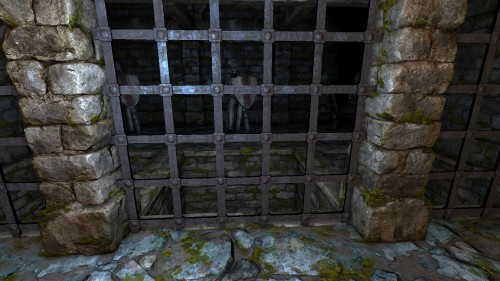 Since there is nothing else I can do, I get ready for a fight, save my game and pull the lever. It doesn’t end well. 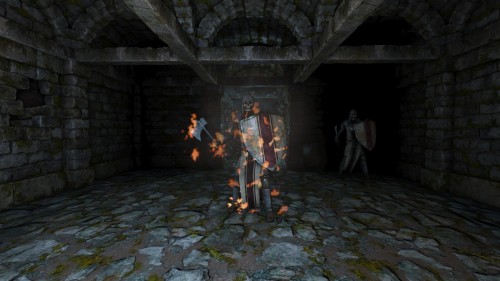 Pictured: Even after preparing, I still got ambushed.

I let myself get surrounded, and my mage died. I decided to load a game and then realized what my second huge mistake was.

I didn’t save. I was back to where I started this playthrough.

Luckily, I’m consistently dumb, meaning most of the time in my previous attempt was spent figuring out the puzzle of the secret button. Now that I new where it was, it only took me a minute or two to catch up. This time, I’d be more prepared.

In fact, I was so prepared I jumped into the activated teleporter and into one of the monster rooms. This allowed me to take them one at a time. 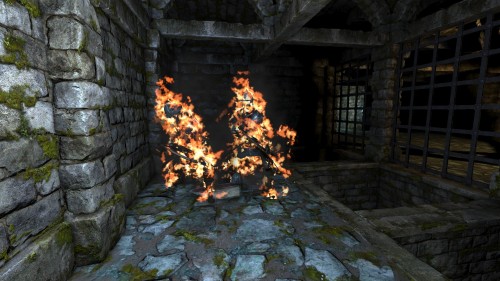 Pictured: Me fighting a group of skeleton archers in a monster room.

At this time, Fang, my alchemist and Mulrag, my barbarian both reach level 8. Fang gets a point in alchemy, giving him a trait that increases the power of healing and energy potions he brews. Mulrag gets his first point in Armor. At two points, he will be able to wear light armor without penalties, which is something I should have aimed for sooner. 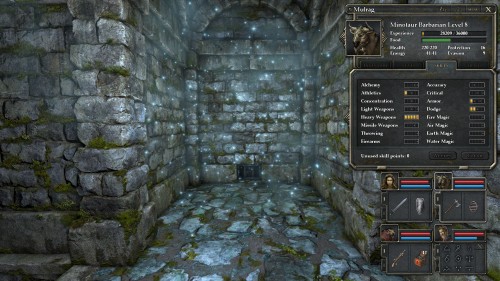 I clear the remaining enemies and now I’m able to pick up a second iron key. I already found one before writing this, so I know exactly where I need to use this one. 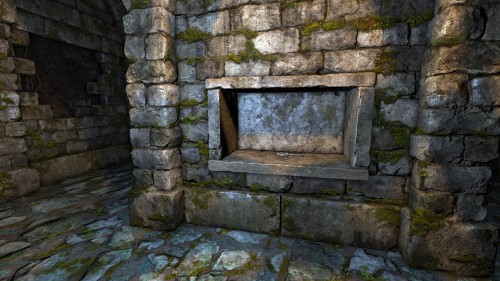 However, I first need to figure out how to get to that treasure chest.

And there’s one more thing. The reasonable thing to do would be to avoid holes in the ground. However, they do take you into level areas you don’t usually get to, so it’s worth the damage you receive for jumping down. 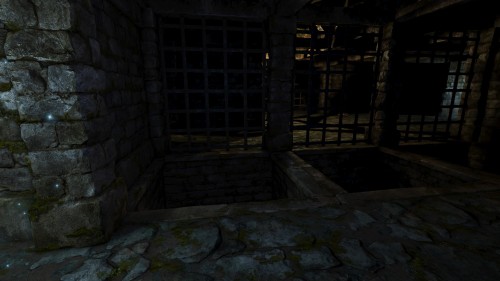 Pictured: A typical hole in the ground.

This time, it’s actually even better because I fell into a pool of water. On the other hand, I had to fight a pair of slimes and a group of archers, so I received a lot of damage. 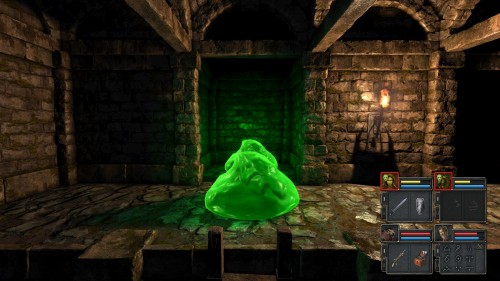 Pictured: A couple of slimes, about to do some serious damage to me.

Once the slimes are dead, I’m able to take a breather and look around. 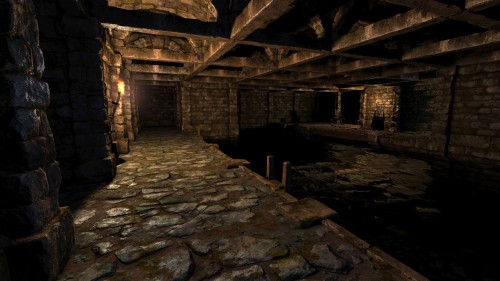 Pictured: A wider angle view of the area I fell into.

It takes a risky dive through the water to get to the archers on the other side, but the reward is a pair of Rogue Pants, which my alchemist is now wearing. Further exploration reveals a secret area with a shield and some ammo. The shield is perfect for my wizard. 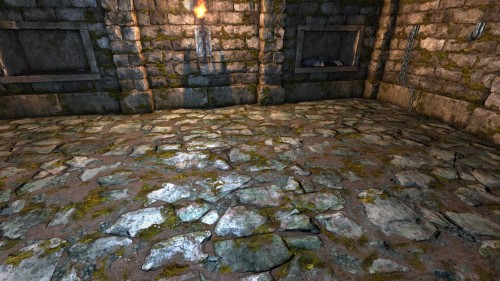 Pictured: One of the game’s many secret areas.

It’s time to take the teleporter back upstairs.

The treasure chest was tricky. It required shooting an arrow into the darkness, where it triggered a pressure plate and created a magical bridge. In my opinion, this isn’t the best of puzzles, since it required random wasting of ammo just in case something happens. I didn’t figure it out, I got lucky. 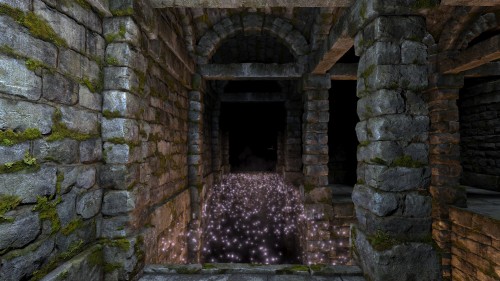 Pictured: The magical bridge leading to the secret treasure chest.

To make things taste even more bitter, the chest was a mimic, as I suspected. Mimics still drop treasure, though, so I got a nice trident I will be using soon enough. 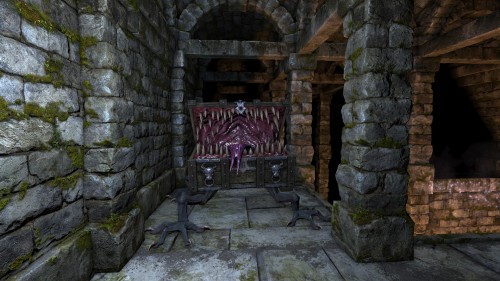 Pictured: This is what a mimic looks like in this game.

I use the iron key to open a door and pull a lever behind it, which opens the final room of the dungeon. 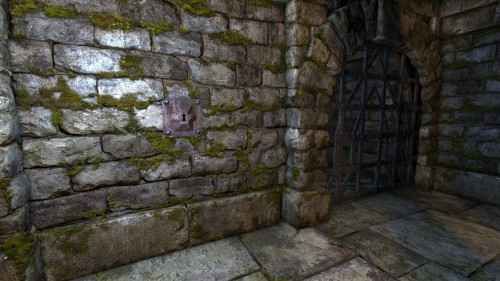 Pictured: The lock which requires the iron key.

The small room, more of a hallway really, contains one of the game’s major magical items, which I’m required to collect – a Power Gem. 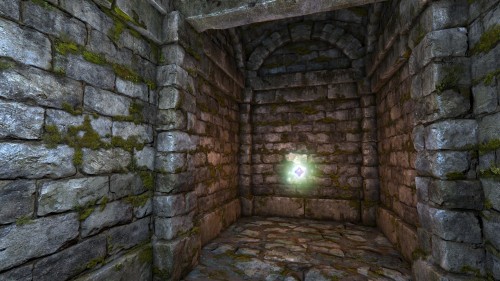 Pictured: The power gem and the main objective of this dungeon level.

As with the first iron key in this dungeon, this one also opened up some additional, not immediately obvious passages. One of them leads to the lower level of The Ruins of Desarune. 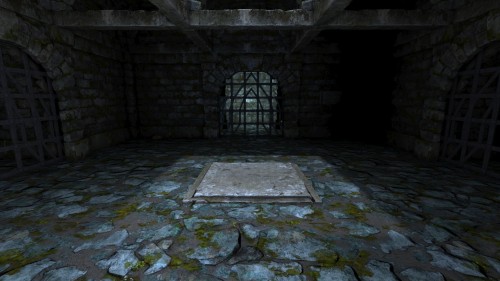 Pictured: The lower level of the Ruins of Desarune.

The first room contains three passages. The signs next to them tell me that the one to the left is the sewer access to the Hamlet of Stormreach. The one on the right leads to the Archives. The teleporter, which I now know is called a windgate, is a shortcut to the surface.

This report ends here, though. I hope you enjoyed it. 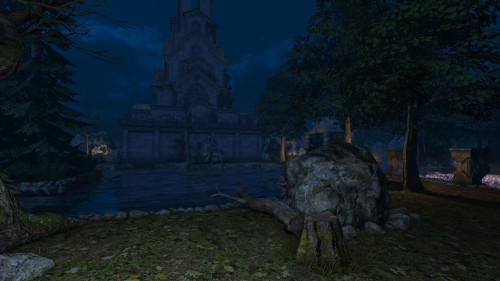 Pictured: The surface, just outside the dungeon.