About  a year ago, there was a trailer for The Witcher 3: Wild Hunt. At that point, I decided it was finally time for me to play through The Witcher 2. Now, almost a year later, I can honestly say I’m impressed with myself. My attempt to play through this game survived several month-long breaks and I managed to complete it without restza

Unlike this one, it took me a several attempts to complete the first game. Overall, I liked it. I like the morally grey decisions you could make, the setting influenced by Slavic folklore more than your average fantasy setting would be, I liked the importance of alchemy and I even enjoyed the combat, as clunky as it sometimes could be.

Not everyone completely agreed with me, though. While most would agree that The Witcher was a good game, many haded the combat and found the way the game played a bit to clunky and archaic. There were also complaints I’d completely agree with, such as the inconsistent voice acting, the overall lack of polish, plethora of bugs generally, and especially during the cutscenes.

I remember one specific instance near the end of the first game where Geralt would enter a room, followed by a cutscene where he got stuck and kept running into the door never triggering the scripted events properly. The bug basically broke the game and I had to reload several times before the correct scripts managed to trigger. It was a long time ago, so my memory is a bit hazy on the specifics, though. 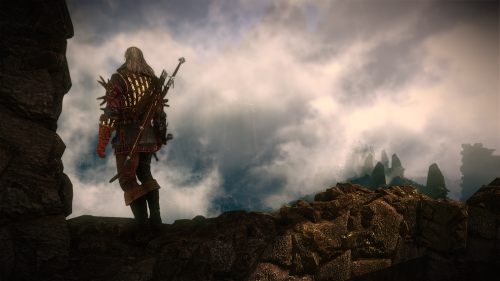 Pictured: One of the many postcard moments the Witcher 2 puts the player through.

I was slacking on taking any proper notes while playing The Witcher 2 and completing it came as a bit of a surprise to me, so let me try comparing each of the bigger elements of the game with the first one in the series.

As I said, I liked the combat in the first Witcher. The mechanics of the fighting were disliked by many, but I wasn’t bothered by them. I could even honestly say I sort of enjoyed them. They were different and unique, while at the same time being easy to understand and not too difficult to master. For me, that’s a definite plus.

In The Witcher 2, the developers definitely listened to other people, not me. These changes did not make it in any way worse, however. The combat requires just as much if not even more skill to win fights in The Witcher 2 as it did in the first one. The differences are a step up from the first game for a lot of people and a step to the side for me, meaning it’s just as good in my book as it was in the first game. 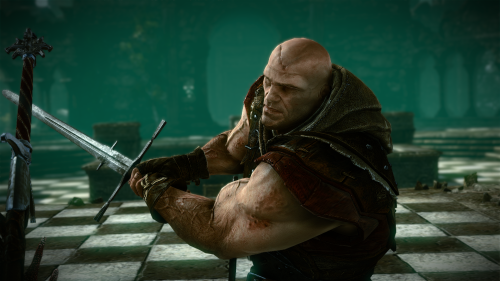 Pictured: While it’s the higher-up politicians that are behind the problems in Geralt’s world, this is the person you’re directly after for most of the game.

There are no combos, and no timed clicks required and you also don’t need to switch around between power, speed and group combat styles. Now, you just get the proper weapon (silver or steel) and the rest depends on your skill as a player, and your character’s gear. To mix things up, you also get to throw a dagger every now and then, set up and set off a trap or throw a bomb. You can dodge, roll around and block to, so strategy is still key, it just happens to be less abstracted behind the mechanics the first game had. You even take more damage depending on which direction you’re hit from, so positioning is a big factor in how the combat plays out.

The cutscenes are bettter but far from perfect.

This time, the weird scripting issues seem to be gone. but every other bad thing is more noticeable because of it.

It feels like bad acting. That’s the best way I can describe it. It’s like robots are posing as humans. All games I’ve ever played have this to a degree, but the Witcher really has it. 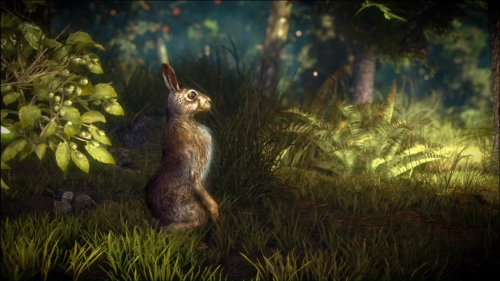 Pictured: A rabbit from a scene at the end of the game’s epilogue. I don’t want to spoil anyone and the picture looks nice.

The characters look realistic enough and are well animated for the most part, but every now and then, it just all falls apart from some reason. Geralt’s robotic and emotionless manner of speaking doesn’t really help either. The voice-work is inconsistent and every now and then, the animations which are normally fine just don’t work, especially in the more physical parts, which is basically any instance where the characters physically interact. I’m talking hugging, shaking hands, basically anything like that, even those parts.

Overall, though, I’d say there were significant improvements over the first Witcher. It’s just not quite there yet.

The Witcher 2 is a huge step up from the previous game in the general polish department. While the original Witcher felt like a low budget, deep and interesting, but in the end unpolished eastern game, this one feels and plays like a triple-A title throughout.

The first Witcher had issues with crashes, loading times, pretty much everything.

This one looks better, runs smoothly and it’s actually quite impressive how it manages to load things on the fly. Loading screens do occur, but very rarely and for the most part, the game slowly loads the data as Geralt walks from one area to another. My one minor gripe is that I wish the quick loading would be quicker.

Most of the side-quests in the first Witcher were quests you’d find in a MMORPG. Kill X enemies of type Y; Collect N items from area M; etc. And the thing is, that was in fact what you were doing.

There are still quests with objectives like that in The Witcher 2, but you usually end up achieving the objective in some other, non-direct way. The most direct one I’ve seen up to this point was one where you had to bring in 60 harpy feathers and you did do it by killing harpies. However, you did not explicitly have to go to a harpy-infested area and kill them until you got enough drops. Instead, you simply play as you usually would, following other quests, and you’d end up with enough feathers in your bags anyway. There was no need to outright go into the wilderness and look for harpies. 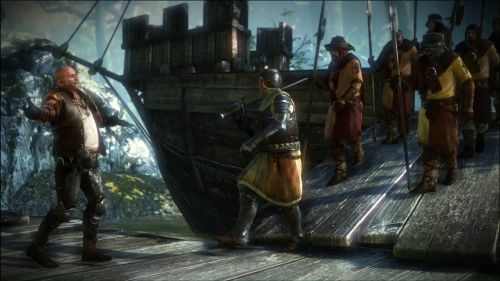 Pictured: Saying anything about this would make it a spoiler, so let’s just enjoy one of the many postcard moments.

With most other quests that sound like something from a typical MMORPG, you’d end up doing something completely different to what the objective would imply. For instance, you’d do some research on the monster, find out a specific trap might help, find someone who can craft it or who sells it and then find the lair and hunt down the monster.

In general, to, it feels less like “you’re in a quest hub now, so do all these quests and then do that one story quest”. The core mechanic is still like that, but the actual story drives the quests far more than it did

The game has them, sadly.

They aren’t too bad and there aren’t that many, but having them is enough to warrant a negative mark, so the game gets it from me.

–1 point for having unneeded quick-time events.

There are three basic instances where these occur. The first instance are the fist fights you get in taverns and other places. The events consist of hitting the movement buttons (A, S, D, W) when they appear on the screen. 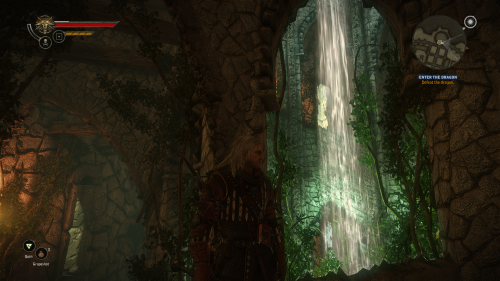 Pictured: I took this screenshot during a boss fight. It looked so good it was worth the risk.

The second instance are boss battles against big boss monsters. You usually dwindle down the monster’s health to almost zero, at which point, there’s an interactive cutscene with a few easy to handle quick time events. There’s no warning though, so you need to be careful not to miss them.

The final instance is the one I dislike the most. There are one or two story cutscenes where you’re supposed to hit something to progress the story correctly. In at least one of them, the alternative is instant death, so this is by far the worst case of a QTE. Luckily, it only happens once or twice and the one case where I do remember it, it’s a branching story line, so many might not encounter it at all.

I didn’t like them in the first game and I don’t like them here either. Honestly, they feel a bit juvenile, not adult.

I did laugh out loud at one point. There’s a part of the story where a sorceress does some magic to heal a major female character. The magic involves a kiss, at which point, a dwarf says something along the lines of “my favorite type of magic – lesbomancy”. It’s not exactly politically correct or a respectful thing to say in general, but it’s fine and definitely something you’d expect a stereotypical dwarf to say. 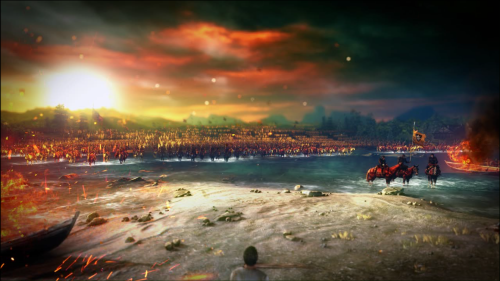 Pictured: A scene from the Yaruga River. “Jaruga” means “gully” in Croatian.

Also, I should probably explain the title of this post. In the Witcher universe, both bumping and plowing are euphemisms for sex and they’re used a lot. It’s more jarring then the fracking in Battlestar Galactica. I’m not a fan of these being used. Especially when I’m pretty sure the f-word does get used on occassion.

The Witcher 2 is an excellent game.

It’s not a mechanically polished experience and that makes it great. It means it’s not intended for the widest of audiences, which in turn means the targeted audience gets to enjoy it more.

It’s also not a technically polished experience, meaning there are bugs and weirdness which make it slightly less than perfect overall.

Still, it was a great game and I’m glad I’ve played it.

I probably won’t be playing the third one any time soon (at least a year, maybe more), but I’m greatly looking forward to the moment when I do.