I bought the Might and Magic Six Pack from GOG.com ages ago, so I figured it was finally time to give it a try. I was extremely worried about this and I was postponing it for months? Why? Because Might and Magic Book One: The Secret of the Inner Sanctum is almost as old as I am.

About 12-15 years ago, I’m not exactly sure when, I had an ancient PC. During this time, people already owned awesome new Celeron PCs, and all I had was a lousy Pentium at 200 MHz, a 4MB VGA and 32MB of RAM. Even my monitor sucked, because it was limited to a 640×480 resolution.

Suffice to say, I had a hard time finding games for it, so I eventually turned to the oldies. One summer (or winter, not sure), my sister got me one of these oldies from Germany. It was a dual disc. Might and Magic – Clouds of Xeen & Darkside of Xeen. I’m not sure how exactly it worked, but I think both games were somehow combined into one. Then again, I might be completely wrong and it was in fact that I never got to the second game. 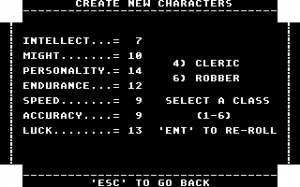 This is where you make a character. Lots of rerolls!

In any case, the game was in German, I didn’t understand a thing and even the concept of these old school CRPGs was completely foreign to me. I did not get far at all, and at one point, my first set of characters died of old age even. Still, I got lost in this game and I loved every moment of it.

Years later, I got a pirated copy of Might and Magic IX and I didn’t like it as much, but I still greatly enjoyed it. It was far more generic, but it still had that unknown something that keeps me hooked to CRPGs. 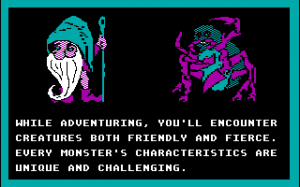 There’s a slideshow you can look at before you start.

These two experiences, but primarily my experience with the World of Xeen are the reason I bought this six pack.  That, and the fact that I’ve been following the CRPG Addict and his playthrough of the game made me decide to try my luck with the first game in the series even though it’s old and it shows.

How to make the GOG Might and Magic Six Pack Portable?

Since I wanted to play the game on both my PC and my laptop, I decided to try and make it portable. Technically, it already is portable. You can copy the folder with the six games and DOSBox anywhere and as long as you run DOSBox with the correct parameters, the games will work. The only issue is that you don’t have the convenience of the shortcuts. What I needed are shortcuts with relative file paths, but those aren’t directly possible with Windows.

Instead, I used a batch file. I made a new text file and wrote this in it:

I saved the text file as a .bat file and then copied this batch file and all the other files and folders within the Might and Magic six pack installation folder onto my USB drive. Running the batch file runs DOSBox with the correct parameters to run Might and Magic Book One.

The most important thing is that the batch file needs to be in the correct location.

Let’s say we have a folder named Might and Magic I-VI on the USB. This folder needs to contain the following:

You can name the batch file whatever you like. If the contents of the batch file are correct and everything is in the correct spot, it should work. The same can be done with the other five games.

This one actually doesn’t run on DOSBox, so you can just run MM6.exe from within the game’s folder. However, for the sake of having a full set of “shortcuts”, here’s what the batch file should look like:

You can do all of that, or you can just download the shortcuts in one nice .zip package.

Extract the contents of the .zip to the Might and Magic six pack installation folder and then you’ll be able to copy the six pack folder anywhere and run the individual games via the shortcuts.

Next time, I’ll play the game!

Well, I actually already played it, but I don’t have time to write about it right now. I promise it’ll happen soon, now that Gothic is out of the way. In the foreseeable future, I’ll be playing mostly Might and Magic, with an occasional Tomba! on a train ride. 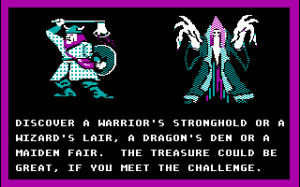 I guess it’s an alternative to an intro video. It’s an old game.