Where to Go After the Cathedral

This time in The Soul Reaver, I took the opportunity the save system gave me by always putting me back in the first area to look around and explore some more. It was worth it to. I ended up wandering into the human citadel again and found a brand new upgrade. This time, it was an artifact that outright doubled my spell points, allowing me to use my two glyphs much more frequently. 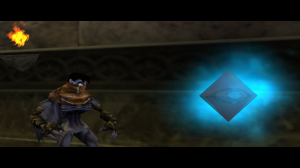 This magic upgrade was the first I found and it doubled my spell points.

I then went back to the outdoors area with the huge skull, hoping to finally find the way further, but after a good half an hour of aimlessly looking around, I found nothing. Eventually, I gave up, saved my game and ended my session.

It kept itching at me, though, so I started the game up again and deiced to listen for the Elder God’s advice by standing on the platform in the starting area. This time, I listened carefully and realized he was telling me to go “past the pillars”. Then it dawned on me. The pillars are where I fought Kain. The outdoors area was just the place where I got my stone glyph, nothing else. 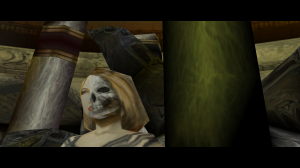 Sometimes the graphics really shine. Not this time.

With this knowledge, I went back to the Sanctuary, talked to the spirit at the Pillars of Nosgoth and immediately found a climbable wall which led me to my next destination.

The ancient tomb of the Sarafan, once impenetrably sealed… Now, ravaged by Nosgoth’s upheavals, its mysteries lay exposed. In the time of Vorador, centuries before Kain was made, the Sarafan warrior priests waged a merciless war against the vampire tribes of Nosgoth. Emboldened by righteousness, they committed unspeakable and indiscriminate acts of violence – massacring fledglings and ancients alike, they decimated entire bloodlines in mere decades. Now their husks lay here – murderers enshrined.

The Tomb of the Sarafan was a short area, but it represented a huge part of the story. It was also filled with the first class of vampire enemies I encountered in the game. I got some practice with the Soul Reaver, though, so getting rid of them was much easier now. All it takes is some patience and a single proper hit with the Soul Reaver, followed by a stab, to completely obliterate them. 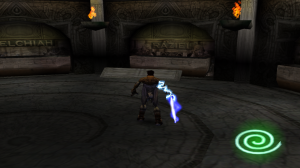 I ran through the passages, found and activated the portal and then finally entered the tomb by passing through a gate in the spectral realm. Once I got in and shifted back to the material realm, the realization happened. The Serapan heroes enshrined in the tombs, the humans celebrated as saints were Raziel and his brothers. Kain has a weird sense of humor, I guess. He raised his mortal enemies as his first lieutenants.

I shifted back to the spiritual realm inside the tomb chamber and fell to the area bellow, where I was able to get back to the material plane and fight the next boss.

I’m not sure if I missed it, but I didn’t catch the game telling me the name of this boss. Instead, I googled it afterwards and found out it was Morlock. In any case, I’m not sure if I should even consider Morlock a proper boss. I hit him a few times with the Soul Reaver and then impaled him like any regular enemy. I’m not even sure he has more health than some of the slightly stronger versions of regular enemies. 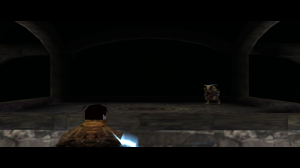 I can’t really call this guy a boss.

The ability he gave me, on the other hand, was well worth the boss status. I can now emit some sort of ranged force projectile which stuns weaker enemies and activates various switches, the few of which I’ve already seen in the previous areas.

As soon as I got hold of the ability, I got back to the portal and went to back to the outdoors area, where I remembered one of these switches was blocking the way to a health upgrade. I had to climb all the way to the Stone Glyph tomb to get to it, but it was well worth it, since it was my tenth upgrade, meaning my health has now increased for the second time.

I’m also pretty sure I saw one of these back in the Silenced Cathedral, so I’ll probably go there next. For now, it was time to take a break.