Too much of a good thing is still too much most of the time, so I decided to take a short break from RPGs. I already had Spyro the Dragon on my PSP, so I simply started a new game of that.

Spyro the Dragon is a game I never owned. Instead, there was a demo of it on the disc that came with my PlayStation. There was Spyro the Dragon, Tekken 3, Crash Bandicoot 3, Tomba!, Bust a Groove, Tomb Raider 3, MediEvil, Gran Turismo and maybe a few others that escape me now. 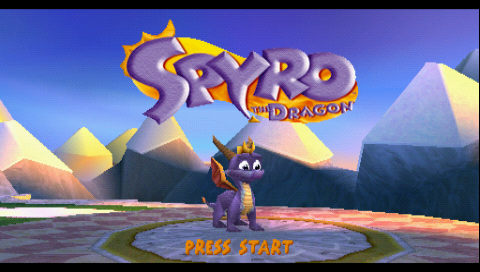 Other than that, I bought Rascal and ReBoot, which both turned out pretty bad.

Basically, it was a while before I would get good games on my PlayStation, so I played the demo disc extensively and Spyro the Dragon was one of the games I knew by heart. I collected the crap out of everything in the three or four levels accessible from the demo.

I also remember not completely understanding how the full game would play into this. These days, I fully understand that a level from the first world was completely removed from the demo, as was the boss level, so you simply weren’t able to progress further. In hindsight, this was actually a pretty cool approach, because the fact it was a demo wasn’t constantly in your face.

In any case, I wanted to play something simpler between my RPG sessions and HowLongToBeat says Spyro the Dragon is relatively short, so I decided to go with it.

It seems that Spyro the Dragon has a slightly harder time running on my PSP, and an especially difficult time playing nicely with the PRXShot screenshot plugin I’m using. Throughout my first two sessions, the game locked up several times as I was taking screenshots, forcing me to physically turn off my PSP and reboot, making me lose progress every time. 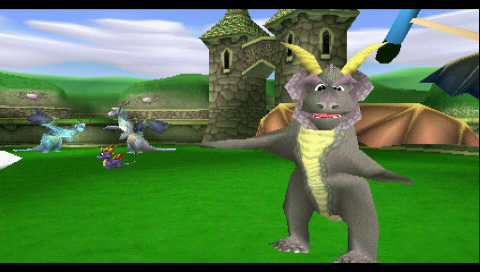 I wonder who’s holding the microphone in the intro interview.

Luckily, you can save after every dragon you rescue, so once I got into the habit of saving, it wasn’t a problem anymore.

I actually had a running save on my PSP from back when this blog was inactive, where I managed to rescue 20 dragons in total and get to world 2. I knew it wouldn’t take long to get to this point and I wanted a complete experience, so I decided to overwrite this save and start the game from scratch. 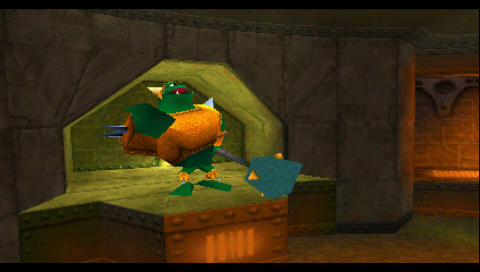 This is Gnasty Gnorc, the big baddie of the game.

The Artisan world is the first world in the game and even before I got to play, I noticed a few things in the intro.

First of all, Spyro’s voice actor is bad in the intro. He’s pretty good in the game, but in the intro, it’s a very annoying voice.

Secondly, the big dragon giving the interview says something in the line of “There are five (or six) worlds and we have 12 000 (or 14 000 treasure).” This makes me think there’s a bonus secret world in the game, but I refuse to use guides in a platformer, simply because a big part of the fun in games like Spyro is exploring and collecting by yourself.

World and levels in Spyro

Spyro the Dragon is split into several worlds, each consisting of a hub level and portals to several separate levels. In later worlds, there’s also a special flying level, and there might be even more types, but I haven’t gotten far enough to know for sure yet. 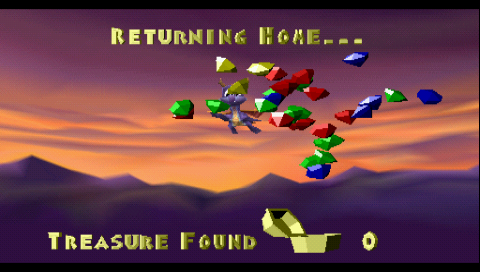 Every time you transition levels, the things you collect add up to the main pool.

In each level, there’s a set number of petrified dragons to rescue, a certain amount of treasure to collect and optionally, a thief to catch and retrieve a stolen dragon egg from. You get to track your collection progression from a self-explanatory statistics screen in the start menu and that’s about it.

N64 gamers know the type of game Spyro the Dragon is, but personally, I didn’t have a lot of experience with 3D collector platformers. After a while playing this one, I’m starting to get the appeal. 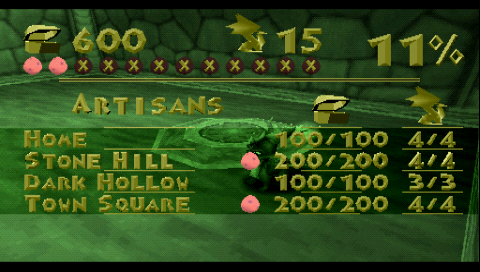 This is where you track your collectibles.

In any case, the Artisan world in Spyro the Dragon is very obviously an introductory world. In the hub level, the enemies simply run away from you and don’t even try to attack you, so you’re allowed to familiarize yourself with the mechanics.

The game has a minimal approach to teaching you it’s mechanics, using good game design instead of outright telling you what to do. On the other hand, the dragons you rescue do actually sometimes tell you what to do, but you aren’t forced to listen to them and most players will figure out on their own before the dragon tells them.

I managed to collect every bit of treasure, retrieve every egg and rescue all the dragons within the Artisan world. I also beat the boss and advanced to world 2. I did this during a 1 hour train ride, which should tell you how easy the first world is. 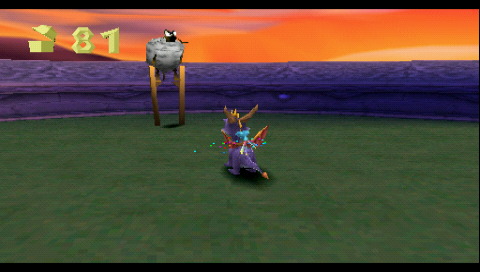 The first boss was completely unimpressive.

As I said, I get the appeal of collection platformers. It’s all about how the collecting feels like in the game. All the treasure you collect makes a satisfying sound when you gather it up, you get to track your progress in a very transparent way and even the game says you ought to collect stuff – the big baddie has found a way to transform treasure into enemies, so it’s better you have it before more enemies appear.

The second world, named the Peace Keeper’s World is, ironically, a battlefield. Now, the enemies start to mean business and there are deathtraps around the level, but it’s still relatively easy. The levels also started to carry far more treasure and it takes a while to figure out all the secrets.

I got 190 treasure in the hub world before I went into a level, because I figured I’ll get a new ability to open up two large chained up chests which contained the last 10 treasure. I was wrong about that.

One of the levels I got into introduced me to the level destruction mechanic. There was a rocket I could light up and it would open up a chest for me. Then I remembered I can control the cannons in the hub world and got to the realization I could use them to open the chests. It doesn’t look like there are any upgrades in Spyro the Dragon, which I don’t see as a bad thing. It’s just an observation. 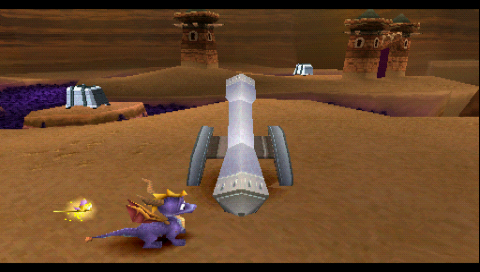 You can use cannons in world two to open up new areas and destroy chests.

The Peace Keeper’s World has the first flying level. Flying levels are time attack levels where you simply complete against yourself in completing level goals as fast as possible. In the first flying level, Night Flight, the goals were to first fly through 8 rings, then destroy 8 chests, fly under 8 arc and light up 8 lights. It took me a while to get through it all in one go, but it was all about remembering the level layout and getting used to the new set of controls. Once I did all that, it was a steady progression until I did it all.

The boss of the Peace Keeper’s world actually had a pattern I needed to figure out. He has a metal armor in front, so I needed to hit him from the back, three times. The first time, I had to run away and dodge his attack, then attack.

On the second hit, I needed to attack him as he was turning around to attack me and the third time, I had to jump over his weapon and then attack him.

I lost a life fighting the boss, but It wasn’t too hard. With that, I got all the treasure and used the balloon to get to the third world. This is where I am now.

I hope I’ll be able to complete a few levels of the Magic Crafters world, but it will only be a 40 minute train ride, so I don’t think there’s enough time to clear more than one or two.