Yup! It took me a couple of hours-long sessions to do it, but Spyro the Dragon is now 100%, or more precisely, 120% completed. Here’s what happened…

The Beast Makers world had a swamp theme, which is something I don’t usually like very much in platforming games, so it definitely isn’t my favorite world. That being said, it was still very, very fun and it probably took me the longest to completely clear. This was mostly due to the Tree Tops level, where I had a difficult time collecting all the treasures.

Tree Tops was heavily focused on using the supercharge pads to navigate around. In several places, I actually had to chain supercharge pads into each other in order to reach some of the hidden gems. I’ve spent well over an hour and even stopped my playing session mid-level, not being able to figure it out. 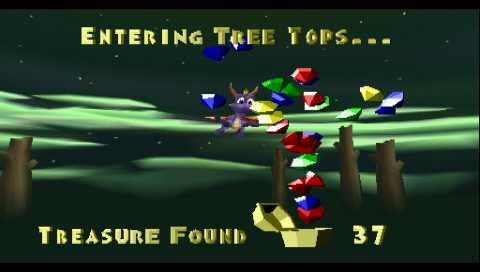 Tree Tops was probably the most difficult level for me.

As it usually happens, though, when you take a break and come back, you have a fresh view on things and often do much better than previously. The fresh view part on this level was the fact that there are several thieves in it. Instead of eggs, these thieves simply had a bunch of gems on them, since I already had all of the eggs at this point.

More importantly, two of the thieves followed supercharge routes I was supposed to be following, so they basically led me to all of the gems I missed. Once I realized that, it was just a matter of mastering the individual routes and go through them without dying.

Dream Weavers went by relatively quickly and I didn’t have much trouble collecting all the gems. As for the boss, Jacques, I didn’t even realize I was fighting a boss until it died. The secret treasures in Dream Weaver levels weren’t so much secret as they were relatively difficult to get, so it was a matter of mastering obstacles, not looking around that much.

Each dragon is a unique, with a unique personality, though some have generic lines.

Fool enemies were a new thing in these worlds. These guys can’t be killed, but if you hurt them, a platform nearby is temporarily lowered or moved into your reach, so you have to be quick to navigate around. Another new thing were enemies that get enlarged by magic. Since they carry armor, you have to wait for the magic to wear out before attacking them, or in one case, you have to take control of the magic device to remove the spell from them.

The flying level of this world, Icy Flight wasn’t difficult to figure out, but it took me well over an hour to master and beat it. It was all about making tight bends and picking up several things in close succession, so it took way more skill than previous levels.

Gnasty’s World was the last one and it somewhat turned things around. The hub was just a single island with portals laid out in a circle around the central dragon platform. It was impossible to get all the treasures of the hub level without first beating a few of the actual levels, which is different from every other world in the game.

On the positive side, I managed to completely clear each of the actual levels with almost no issues. The only level I found actually difficult was the boss level itself, and that was because of two things.

Firstly, you have to complete the entire level, from start to end, without dying once, because there aren’t any checkpoints. Secondly, I had a hard time figuring out the third step of the process. Here’s how it went…

At the start, Gnasty Gnorc is on an unreachable ledge, shooting at Spyro. You’re supposed to catch a thief who keeps running on a circular route. The thief has a key, which unlocks another such route with another thief, holding another key.

This second key lowers the ledge Gnasty is on and he starts running. This is where I was stuck. I wasn’t sure what I needed to do with Gnasty. He keeps running and you keep chasing him, but you never really catch him except very briefly on the platform at the end of the racing track. I though I had to beat him to the platform, but that did nothing. I couldn’t charge him either because he was too big and the few times I tried to flame him, he would simply hit me. 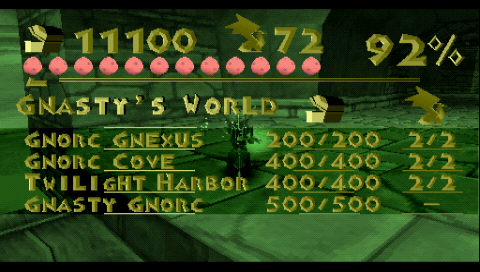 I repeated this process a couple of times, unable to figure it out until I finally managed to flame him once without him hurting me. The way I see it, the only time you can do it is during the moment he’s standing on the last platform, but you need to be really quick or he hits you. 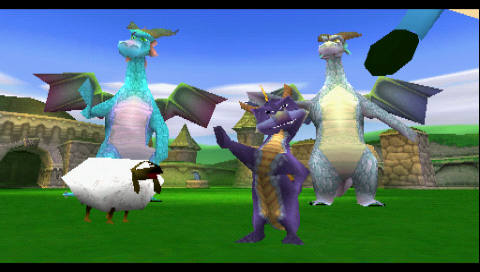 The first ending, before you get all the dragons and treasure.

Once I flamed him, he opened up another door to a lava room, with retracting platforms along the walls. I had to quickly jump over the platforms to reach and hit him one last time and I actually failed here once more, not reaching the end of the room in time before the platforms were gone. As with all bosses, it wasn’t so much a battle as it was an obstacle course I had to master. Once I got to the last part, Gnorc was beaten and the game was over.

Except it wasn’t. I only had 71 dragons (or possibly 72) and there was one last level that wouldn’t unlock. I freed one more dragon in the hub level, on the same central platform where I already freed one before and he told me I need to reach 100% completion for this final level to open. The thing is, I thought I’d have 100% by now.

I took a look at the inventory menu and realized Peace Keepers and Dream Weavers were both one level short of the other worlds. I went back to these worlds and it actually did turn out I missed an entire level in each of them. They weren’t even that hidden and I’m positive I’ve seen the entrance to the Icy Cavern in Peace Keepers at least once before.

The Icy Cavern was relatively easy to clear, though it took me a long time simply because it was big. The Haunted Towers were a pain, because of one single secret area I couldn’t figure out.

How to beat the Haunted Towers

Most of the level is obvious. You get kisses from fairies and use super flames to kill all the knights and destroy metal doors. If you do all that, you get to the point where you have about 360 of 500 gems and you’re one dragon away from getting all of them.

There’s a supercharge pad in one area and it seems pretty clear what you have to do. You charge down the supercharge pad, go through the second metal door on the right in the room on the bottom and follow the semicircular platform around the pond to jump across the area to the roofs of where the level exit is. Right? WRONG! 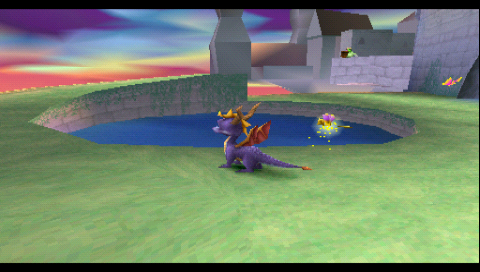 This is the pond and the ramp that tricks you. You’re not supposed to charge up the ramp!

Here’s what you need to do…

You follow the supercharge pad down into the room and take the second metal door on your right. Once you’re outside where the tree mushrooms and the small pond are, you ignore the ramp. It’s there to trick you and it doesn’t lead anywhere. 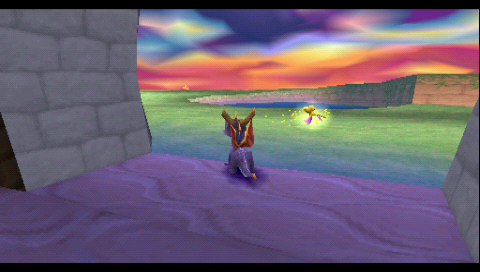 Again, not up the ramp! Instead go left.

Instead, as soon as you’re outside, you turn to your left and jump across the chasm to the metal door that leads up to the wizard and the whirlwind that took you to the supercharge pad in the first place. You use this place as a ramp to jump further ahead and reach a large hidden ledge behind it. 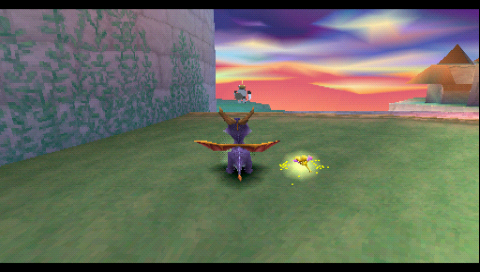 This is where you charge and jump. You need to reach that knight in the distance and continue charging.

Once you’re there, there’s another whirlwind that leads to a ledge with an unbreakable chest and a doorway. The doorway takes you to the last dragon and a set of stairs with a lot of deactivated knight armors leading all the way up.

The trick here is to ignore the gems and knights and quickly reach the top of the stairs, where a wizard is activating the knights one by one. If you aren’t there in time, the wizard will activate a knight that blocks you from reaching him, so you need to go back to the dragon platform to reset the room and try again.

If you do reach the wizard in time, there’s a fairy in the room that gives you indefinite super flame while you stay in Haunted Towers. This can then be used to kill the remainder of the knights and destroy the unbreakable chest outside the dragon room to get the last few gems.

Clearing the two levels I missed got me up to 100% and unlocked the final level in Gnasty’s World, where the last 20% was just waiting to be picked up. 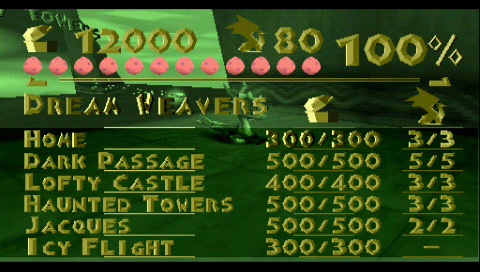 The final level is called Gnasty’s Loot and Spyro can actually fly in this one. Well, technically, he can fly, but he can’t go up in altitude at will. The point of this last level is to get the last 2000 gems. 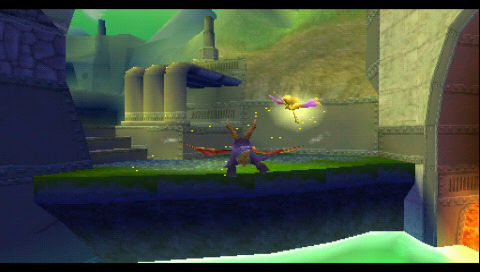 You start at the lowest part and fly around to get everything you can. While doing this, you find a thief who has a key. The key unlocks a door to a set of stairs leading up to a higher platform. From that point, the maximum altitude Spyro can get to increases to the altitude of this platform. You can now get more treasure and find another thief, with one more key unlocking one more door. 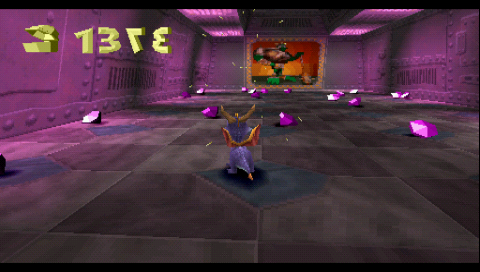 This process repeats four times, with the last two thieves using airplanes to move around, so you need to catch them in mid-air. The final room, past the exit portal, contains a huge amount of gems and it really isn’t that difficult to get them all. I didn’t miss any myself, but if it did happen, all it would take was to look around.

Spyro the Dragon plays differently than, for instance, Crash Bandicoot. These games might belong to the same basic genre, but they should be, for good reason, considered at least separate sub-genres. 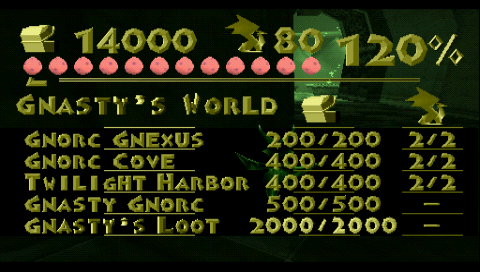 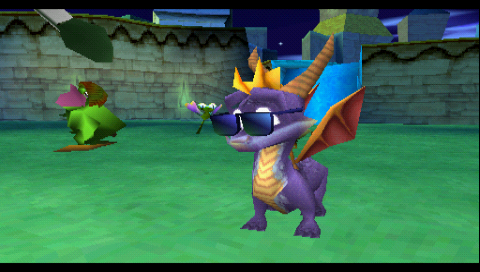 I hear about games like Banjo Kazooie all the time, but never owning the N64, I didn’t get the appeal until now. After completing Spyro the Dragon, though, I know how good the experience of collecting shiny treasure actually feels. It really is a great and enjoyable game.

Even after clearing it all the way, with nothing left in the game to find, I could still see myself playing Spyro the Dragon again in a few years, purely for the sake of enjoying it.

For now, though, I think I’ll go back to one of the PlayStation era’s great JRPGs, or even an SRPG. I’m not really sure.