I stopped my session at an extremely wrong moment last time. Minutes after the events at the elven village, things took a huge turn towards awesome.

I got to the kobold village and gut surrounded by Empire troops. For a moment, it looked like the Imperial solder that joined us, Valeria, would die like Odessa did, but then the Liberation Army arrived in full force and drew the Imperial troops away. 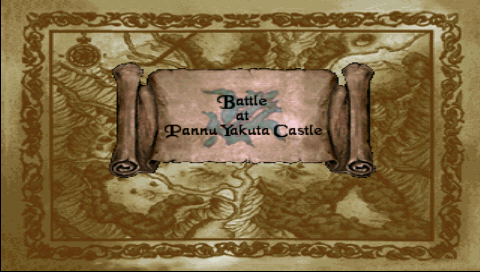 Each major battle starts with this introduction screen.

After that, I fought my first real battle. This is a mini game where you use squads led by heroes to execute special tactics. I started out at around 6000 troops vs the Empire’s 9000, but was able to use magic and ranged attacks to dwindle them down to a point where I lost just 300 soldiers. 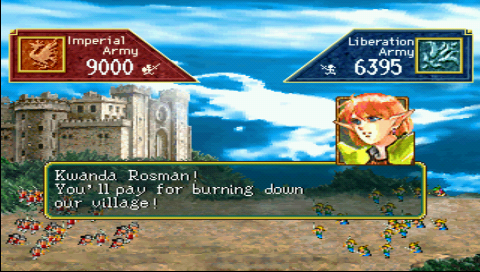 You use units led by some of the heroes during battles.

After that, I took my party to infiltrate the enemy’s castle and eliminate their general. It turned out he was controlled by one of Windy’s runes, but not before Hiro fought an awesome 1 vs 1 battle in the style of fighting games. 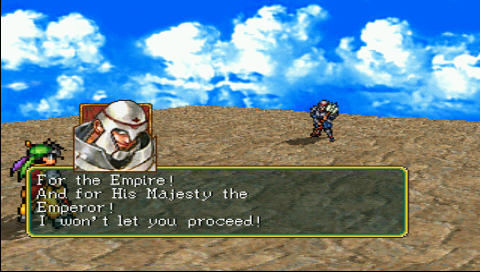 It was pretty easy to win the duel. It’s a nice touch, though.

I had a bunch of people officially join the Liberation Army and then there was a 3 months later screen. Rune castle changed its layout and gained two extra swords.

As expected, the new blacksmith now allows me to further upgrade weapons. The mage girl I found in the forest unlocked another awesome feature. I can now teleport to (almost) any location I’ve already been to.

Some people aren’t good at war.

Next up, Flik and his guys decided we should attack the French general. By French, I mean he’s into fashion and gives French names to everything because that’s fashionable as well. Basically, general Milich Oppenheimer, who I’ve already met in a department store back in the capital, is the stereotypical anime gay, but not gay, just fashionable character. I hope I don’t sound offensive here, because I’m just trying to convey how he’s portrayed. Even my description of him is stereotypical.

In any case, after the last battle, we immediately went to another one, which we one. Then Flik, what with his role being to provide some drama and personal conflict with Hiro, decided to push for an assault on Milich’s castle and we lost most of our troops due to a giant magical rose covering everything in poisonous pollen. It was an unwinnable battle.

Back in full control.

At this point, I was left to my own devices again, with my mission being to find a way to get past that rose. I had mostly full access to Milich’s domain, with three cities, a locked dungeon and castle and a place where a special class of knights trains being accessible.

The cities were free for me to explore, but as for the other three locations, I was only able to enter them and find out there’s nothing I can do there. 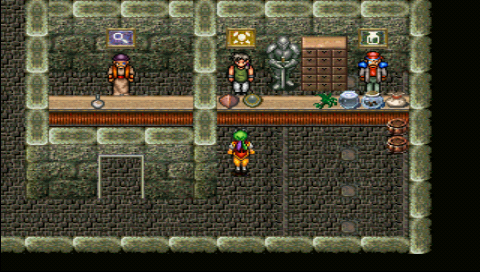 There’s plenty of shops at the castle now.

The three cities had plenty of characters to recruit, providing me with several new services at the castle, including an appraiser. That one involved a whole mini-quest to add him to my ranks. The appraiser had his own store in one of the cities. He said he’d join me if I find something he couldn’t identify. Several NPC’s told me there’s an item called The Nameless Urn, which some monsters dropped. I fought in random battles on the world map until it did drop and was then able to recruit him by just talking.

The Urn is still in my inventory and I can’t sell it because it’s a key item. However, I think I’m just supposed to drop it. There’s no hint I’ll need it for anything else. 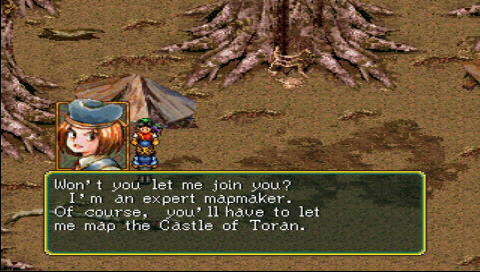 I recruited this guy to. I now have a world map, which was long overdue.

Another awesome character I recruited was an old woman who gave me a Magic Mirror. This item allows me to teleport back to Rune Castle from anywhere on the world map. Combined with the young girl I already recruited allowing me to teleport directly to any location I’ve already been to, this makes traveling around the world easy as pie (whatever that means).

There were some other PCs I was able to recruit, including Kuromimi’s younger brother, but none of them were really that important.

That’s what’s important. I know what I have to do. There’s a legendary apothecary in one of the three cities who’s able to cure the effects of the pollen. That is, he used to be in one of the cities, but the NPCs there say he retired to the hills.

The problem is, I have no idea where these hills are. I visited every place I could think off, used the boat to access even more of the world map, talked to every NPC I could find, but I’ve gotten nowhere.

Of course, there’s bound to be something I missed, because there’s no indication anywhere online that Suikoden is an unwinnable game, but I just keep missing it. I’ve spent well over an hour already, just wandering around aimlessly, hoping to stumble into something.

That being said, this was almost a week ago. I’m hoping that I’ll have a fresh view on it once I get back into the game and then find what I need to do more easily. In the meantime, wandering around the world map gives me some cash, so I’m able to at least upgrade weapons along the way. It’s not a complete waste of time.

How does it play?

Suikoden still plays great. The battles are quick and unobtrusive, the story is light and even the loading times aren’t painfully slow like some of the higher-level JRPGs of the era. Everything is just easy to get into and doesn’t get annoying.

I really like the music to. It’s simple, but fits the theme and there’s plenty of variety. Some of the tunes remind me of Final Fantasy VII for some reason.

Obviously, I need to figure this out.