I’ve owned Warlock for a while now and played through a few games already, but never wrote about it for some reason. The problem is, I can either do a report, taking more time writing and taking screenshots than actually playing, or I can do what I’ll do in this post, write after I’ve played through a match and have trouble thinking of what to write about.

I picked Nicholas Frost as my leader and started a game on a normal size pangea map on normal difficulty.

Warlock is a 4X game that doesn’t really play like a 4X game. Way more emphasis is put on war than in your average 4X game, so it feels more like an advanced clone of Fantasy General than Civilization.I bought Warlock hoping it would be like Majesty and there are similarities, but it isn’t really the same type of game. 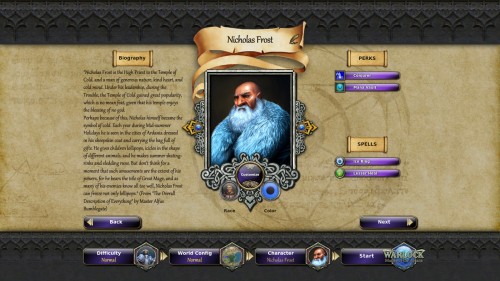 This is Nicholas Frost. He shares my name, kind of.

But as I said, I started as Nicholas Frost. He’s a Conjurer and has a Mana Vault, meaning he starts out with more mana than usual and also produces more mana per turn. I guess the idea is to use summoning or enchanting spells to get ahead, but in hindsight, I haven’t really taken advantage of this.

Instead, my initial plan was to go with a rock-paper-scissors approach and make my first three cities branch out towards warriors, rogues and archers each, allowing me to build all three basic units early on. 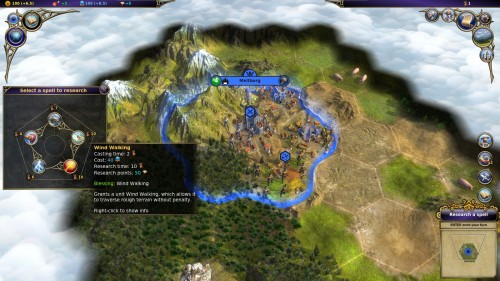 What I ended up doing was to realize this wouldn’t work because various units share some of the prerequisites, so it wouldn’t be cost-effective. Instead, I then opted to focus each city on a particular resource,  based on the unique resources they have access to.

I met up with King Lich V and Malinalxochi early in the game and kept entering and leaving wars with them throughout. As I said, Warlock is a game that focuses on war, so diplomacy isn’t complex and war is very easy to get into. 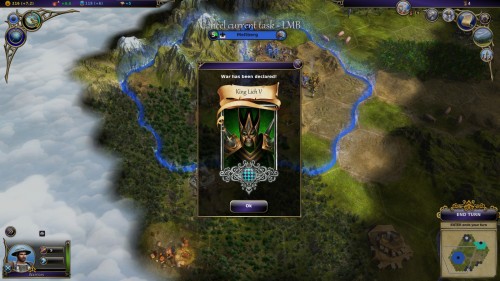 King Lich V is the first friend we met.

Malinalxochi was a bigger pain in the butt than King Lich V, mostly because the few cities I had bordering with him were a bit further away from the rest of my empire and stuck behind some difficult terrain.

King Lich V, however, was very close by and gave me more trouble with his spells than his army.

That being said, the enemy AI in Warlock could use some work. Over and over again, I’ve seen them attack the wrong unit or use a powerful spell on neutral monsters while my units surround their cities. It’s not something that happens extremely commonly and more often than not, they did a better job at using spells than I did, but that was mostly because I kept forgetting to use my spells at all, not because they were especially smart about it.

Rjakh was my third opponent and I only met him towards the end of the game. I was Malinalxochi’s neighbor, so I guess they did some fighting between them as well. Technically, my borders did neighbor his, but he was behind even more tough terrain than Malinalxochi, so it took me a while to get to him. 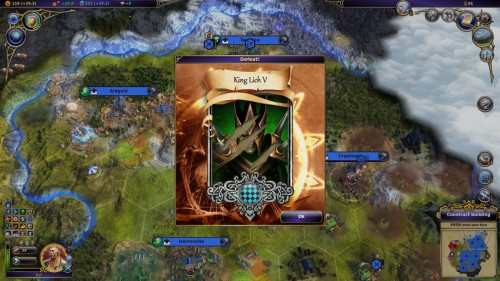 King Lich V was also the first enemy we defeated.

By the time I did, King Lich V was already gone, so I can basically say I’ve fought only two opponents at a time throughout the game.

At the start of the match, I wasted a lot of the basic troops by being careless and slamming them into neutral and enemy troops that were far to strong for them.

Eventually, I managed to scrape up enough money to hire an ogre hero. This guy was orders of size stronger than anything else I had, so I started focusing upgrades on him, making him steamroll through several of the enemies’ and neutral cities. Eventually, I also hired a healer hero to serve as his support and with these two guys and a unit of minotaurs, I completely destroyed King Lich V.

Sadly, as it usually happens with and strategy games I play, I got too confident and started taking silly risks fighting the other two mages, eventually losing both the healer and the fighter.

Luckily, by that time I had an economy and a military, so I was able to fend Rjakh and Malinalxochi off with my regular troops. I kept building minotaurs and later even unlocked the black minotaur upgrade, but I never got the chance to use the upgrade on any of my troops – the remaining two mage’s capitals fell before I had enough money for it.

During all of that, I did hire a few more heroes and they proved useful, but they never became as overpowered as my ogre. I also researched a resurrection spell and fully intended to use it to get the ogre hero back if that’s even possible, but again, the enemy capitals fell before I managed to cast it.

The plan to focus the economy of my cities to one resource per city sort of work, but in the late game, I started pushing it in all directions instead. By that time, it didn’t really matter, but I can’t say I’m completely sure which approach is better – develop one resource per city, or all of them equally. The existence of percentage bonus buildings would support the first approach, but the fact that a lot of buildings have costs for their opposite resources makes me wonder.

I love the upgrade system on the units and the idea that you have a choice with some of the special resources – unlock a unit or an upgrade. I also like the sheer amount of spells and the option to gain favor with gods later in the game, for even more awesome spells.

I love the idea of multiple worlds, but I haven’t paid a visit to any of the two extra worlds I had access to in this match. I just completely forgot about it.

I like the tactics and the amount of fighting.

I love that terraforming spells exist in the game. It gives economists something to do in the late game.

I dislike the simplicity of the economy and lack of proper diplomacy. I dislike the basic approach to city building and that there’s no perfect amount of cities to support. Instead, the more cities you have, the better – there’s no expansion penalty. 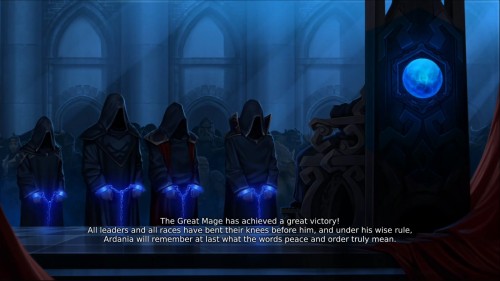 The ending in Warlock is low-budget, but so is Civilization V’s, so I can’t really complain.

I dislike the ratio of offensive to protective/enchantment/global spells. I liked the Master of Magic system better.

I hate that I didn’t find a flatten/lower land spell. It’s possible that a spell like that exists in Warlock, but I didn’t get the option to research it.

Despite the amount of things I dislike, Warlock is a fun game. The key to enjoy it is to understand that it’s not really a 4X game. It plays more like an advanced version of Risk, or slightly different version of Fantasy General, where you play on a random, relatively large map.

Well, it doesn’t really, but that’s how I decided to describe it.

By the way, did you know that the world of Warlock is the same world the Majesty series takes place in? I like that world!

Warlock - Master of the Arcane World of Majesty