Here’s what happens when you read about a game and how good it is for months, and then finally end up playing it after getting it for cheap on the Humble Weekly Sale. The first two episodes of the Walking Dead did not impress me.

The Walking Dead is Pretty Good

It really is. Not as a game. As a game, Telltale’s The Walking Dead sucks, completely and totally. As an interactive story, however, it’s pretty good. I just wish the gameplay didn’t get in the way of the story so often. I honestly think branching dialogues would have been a better choice. 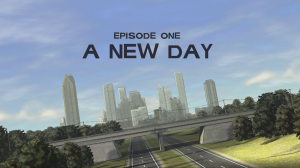 One thing is for sure. The game offers plenty of chances for great screenshots.

Let’s address some of those points I’ve been reading on.

The Gameplay is Part of the Experience 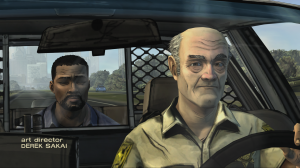 I’m pretty sure everyone online has seen the cop car scene.

I love that you have a limited time to pick dialogue options, and that sometimes, that limit is a bit too tight, and so you end up not picking what you wanted. This also adds to the experience.

All of these things do a great job at creating the atmosphere.

The thing is, it makes no sense that Lee needs to have a comment on every item, even those that aren’t important. I understand why it’s there – because games like Monkey Island had this to. Monkey Island was funny, though, and those lines Guybrush would spew when you clicked on random items were also funny. There really is not much room for funny in a game like The Walking Dead.

And that’s all that bothers me.

Really? That’s all? How is it a bad game then?

Because the good parts I mentioned are also all there is to the gameplay. There’s not enough gameplay in there for me to feel like I’m actually playing a game. As I said, it feels more like I’m watching a slightly longer episode of the show and get to pick how certain things unfold.

And that’s not a bad thing. As a weirdly made TV episode, I found the Walking Dead enjoyable. As a game, it really didn’t do it for me. 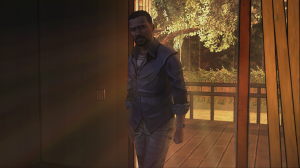 Lee is the game’s main character, but you probably know that.

I mean, you wouldn’t call a bad movie “a good movie with great effects story and music, but bad moviewatch”, even if it’s made after an awesome novel. For me, if the gameplay is bad, then the game is bad. The other parts can save the experience, but they cannot elevate the game.

But on to my next point…

Clementine is a Great Character

I disagree. I think she’s adequately written, maybe even quite well written, but badly realized, and badly played. I’m sorry about the voice actress, but very often, she seems not very into the role. Maybe I’m wrong. Maybe she gets really awesome after this second episode. I intend to play through the rest of the episodes anyway, so if I end up being wrong, I’ll do another write up. 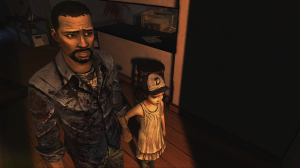 Clementine is who the game revolvers around, but you know that to.

For now, though, I can emphasize with the character, and the Walking Dead does make me care for Clementine, but mostly it achieves this with cheap tricks, not with awesome storytelling. It’s easy to care about a vulnerable, sad and sweet little girl, and I don’t see anything more that the game does to strengthen those emotions.

The Story is Amazing

Say what? In these two episodes (and four hours), there wasn’t a moment that I was surprised, truly startled, or even truly intrigued about what would happen next. Absolutely everything I’ve seen up until now was heavily foreshadowed and completely predictable.

I’m not that smart a person. If I found it predictable, I’m sure others have to.

More importantly, the writing in general is bad. You start with a character seeming a completely nice guy and then turning into a complete creep and crazy-person in almost an instant.

But that’s realistic, you can’t be sure about anyone.

I’m sorry, it’s not. Unless the person is a psychopath, they cannot switch their personality so fast. Maybe, maybe you could claim the game is actually trying to put you into a situation – you meet someone new, so you’re hopeful and you ignore the tells and signs that they’re up to no good, but that would be grasping at straws. If that was the goal, it was achieved lazily. Instead of trying to add subtlety, everything is made obvious to the point where you wonder about Lee.

The player should not figure it out so early before the character. It should happen at the same time, or even after the character figures it out. Otherwise, the player just gets annoyed.

It Was the Game of the Year

I couldn’t disagree more. It’s one of the worse games of the year. From what I’ve seen, it’s one of the better stories I’ve experienced recently. It’s by far the best interactive move I ever watched (I haven’t watched many), but it’s far from Game of the Year, any year. 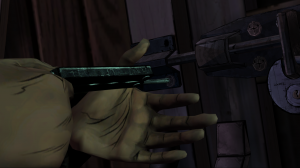 The puzzles aren’t really puzzles in that there is nothing to figure out. You just do the chores.

It makes me kind of uneasy to see that people are willing to ignore lackluster gameplay for a cinematic experience so easily. Maybe the newer generations of gamers simply have different ideas of what makes a good game.

To me, game = gameplay. Graphics aren’t important, music isn’t important, the story isn’t important. Nothing is important outside of the way it interacts and adds to the gameplay. I love a great story, I love great music, and I love good graphics. I play and enjoy games with those to, but they will never be as memorable as a good game would be. I will never go back to the Walking Dead, unless I want to show it off for a few minutes to someone who doesn’t really play games.

The way it is now, I’ll play through the episodes of the Walking Dead, and I’ll never go back to it ever again.

And it’s not about the genre either. I still occasionally go back to Monkey Island and Indiana Jones and the Fate of the Atlantis, because in those games, I can still discover new things and it’s fun to discover them.

With the Walking Dead, I was just annoyingly thinking “when will the story move on already? I’m tired of these conversations and weak puzzles.”

I absolutely, one hundred percent agree. You really, really don’t. What you might need is some quality animation and that certain something that keeps you engaged and stops you from breaking immersion. The thing is, sometimes, only sometimes, the characters of the Walking Dead move in a strange way, show some strange facial expression, something that just feels out of place and you’re suddenly out of it and the immersion is gone.

The game does a pretty good job at reminding you you’re playing a game, though it shouldn’t, considering the gameplay is the weakest part.

The Controls Are Bad

Especially for lefties like myself. Not being able to customize them is bad on itself, but at least they could’ve added a second set of keys more to the right on the keyboard. It’s not like the Walking Dead uses so many keys, there’s no room on it.

I’m honestly not. I can’t remember a single tune and I just finished Episode 2 a few minutes ago. I guess that’s not a bad thing, but it isn’t a good thing either.

The Puzzles are Weak

But I’ve already said that. Scanning the environment to see what you can click and then having the game basically tell you what to do is not fun for me. It’s just an obstacle to the story. Come to think of it, the game could have been just a sequence of story sequences (with branching dialogues) and a series of quick-time events. That would have been more fun than dragging your feet around, trying to fix a swing.

Is the Walking Dead worth the money? Yes, it definitely is. It’s especially worth the price I paid for it, with the Humble Weekly Sale and all. Is it worth the time? Well, I’m on the fence right now, but I’m heavily leaning towards a yes. I’m guessing it will be a definite yes by the time I go through all five of the episodes.

Basically, go for it. Just don’t an amazing or even a good game. All you can really hope for is an above average story, and that’s probably what you’re going to get.

It’s a bad game. You should play it!