Episode 5 of the Walking Dead is completed and I can now say with confidence that it’s a bad game. But wait, there’s more…

I’m not saying decent anymore. The Walking Dead definitely tells a good, even great story. There’s plenty of twists, there’s drama, and there’s an emotional involvement for the player. It’s hard to write about it in detail without spoiling anything, so I won’t, but I’ll definitely say that it’s one of the better stories I’ve experienced in the past few years, at least when it comes to newer games. 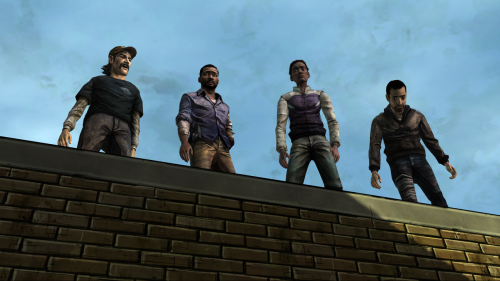 The game is worth buying and playing for the story alone. As for other stuff, well…

I have to separate the characters from the story here, because evaluating these two elements as one would lower the grade. I’m sorry, but the characters are inconsistent and often make no sense. Throughout the game, I felt like the game was trying to make me feel one emotion for a character, but ended up having a completely different effect.

Oh, and one more thing about the characters. I’ve seen plenty of people argue you don’t need good graphics to show emotion. It’s true, you don’t. You do need excellent voice acting to compensate in that case, though, and this game only has adequate voice acting, nothing more. Because of that, some of the scenes can be a bit unsettling or awkward. 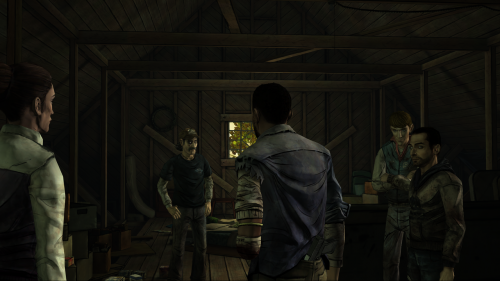 I really hated Kenny before this room. He got a bit better from here.

This might be controversial, but at this point, I’m honestly thinking that a lot of gamers want games to generally be as accepted as other art forms so badly, that they’ll ignore the bad elements as long as the good elements seem worth showing off.

Which brings us to the gameplay.

There’s nothing to Write About

All the while playing through the five episodes of the Walking Dead, I was enjoying the story to a degree, but there was something about the game that was just off-putting, that made it an unsatisfying experience. I couldn’t quite understand what it was, but it kept nagging at me, all the way to the end of the fifth episode.

Now that I’m here, writing about it, I finally understand what it was.

The Walking Dead is all story, but there is absolutely nothing to write about. Why is that?

I’m not Doing Anything 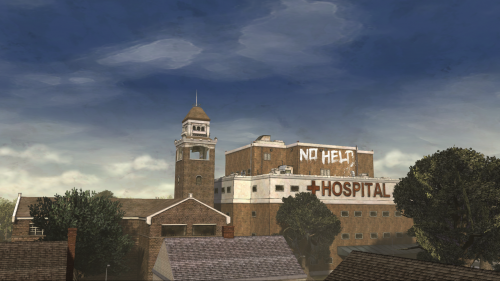 Seeing how close some of the locations are makes the story of the final four episodes a bit more logical.

Hell, I’d nominate Offspring Fling as Game of the Year sooner than I would the Walking Dead.

I know I’m not Consistent

If I was playing an old Lucas Arts adventure right now, I’d probably feel about the same. Walking Dead is a much simpler game than any of the older Lucas Arts adventures, but I wouldn’t have much to write about Monkey Island 3 without revealing the story either. 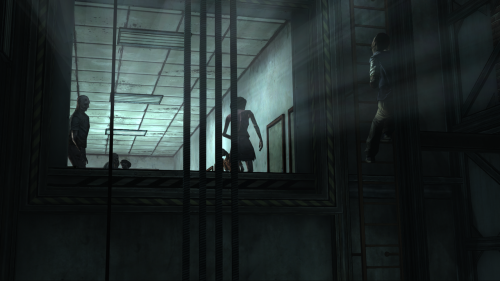 The game certainly offers great screenshot opportunities. I have to give it that.

Still, those were games that felt like you were playing them. You had freedom and options. It was all an illusion and there was still only one way to go forward, but illusions are important in games, or at least they are to me.

At least, I would have been able to write about those illusions. I could put up a screenshot of a non-story related humorous part, or write about a completely over the top and illogical, but fun puzzle.

At least with those games, you felt like you were beating them, which is what I expect games to offer me, first and foremost. With the Walking Dead, the game is just unfolding in front of me – I’m not the one doing anything. It’s more like the game is playing me.

Again, it’s a good story, but the Walking Dead simply does not give me what I want from games – a game. A system of rules I can work with in order to master them, figure them out and beat them. I’m not against a great story. I love a great story in games. I don’t want just a great story. I want all of the above to.

It makes me Feel Detached

The more that I think about the Walking Dead and modern AAA games, the more I think that most of these games are going in the same direction. Off the top of my head, I can’t think of an AAA title that gave me what I want in the past few years. 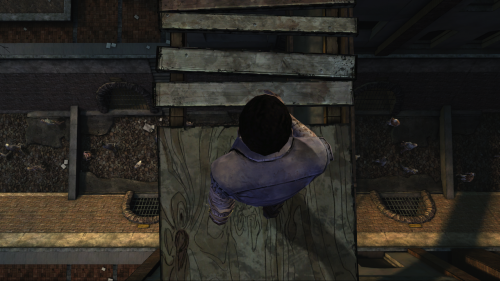 Again, some great screenshots in this game.

I can think of plenty of retro games that did, and I can list a bunch of indie titles that did it, but not AAA games. Am I really that detached from the mainstream industry? Is it really just me that has this problem? I can’t be the only one, right?

I’m not Mad, Though

So the AAA gaming industry doesn’t really interest me anymore. Somehow, it doesn’t upset me. The thing is, I recently realized there are so many great games out there I haven’t played yet, it’s really difficult to be upset when you realize a tiny subset of games isn’t made for you anymore.

I guess I’ll just stick with retro and indie games for now. Trends change, so I might play a high budget game with deep mechanics again. Torment seems like it might be fun. The new Shadowrun already looks fun. We’ll see.

For now, I’m thinking I should move on to Might and Magic Book Two.