Did it The Walking Dead get any better? No! Yes. Maybe…

On the one hand, the characters and the story of the Walking Dead did sort of grow on me. On the other hand, I’m noticing some new annoyances. At times, and this is relatively often, the writing can get lazy. Maybe it’s because of all the branching options and budgetary issues, but suddenly, characters seem to completely shift their personality, just to provide a plot point. 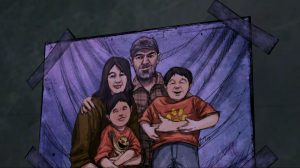 It’s difficult to pick screenshots that don’t spoil too much of the story, so here’s a random photo.

It reminds me of the TV show Glee, where each and every character has a personality that fits their role in the episode and absolutely nothing is consistent.

At first, some random guy is all nice and helpful. Then the story slows down and we need some conflict, so suddenly he’s a cowardly, spineless moron. A few moments later he’s all nice again and then he’s suddenly a traitor. 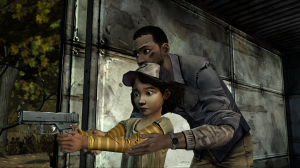 Clementine learns how to shoot.

It doesn’t just happen with a single character, it happens with most of them, except maybe Clementine and the couple you meet towards the end of episode 3 and even there, the woman can show these symptoms at times.

The Gameplay continues to annoy

I’ve gotten used to the lack of it by now, but it’s still annoying to go through an intense part, only for everyone to suddenly slow down, without any sense of urgency left and “give you a chance to talk to them”. It’s obvious that this is what the Walking Dead is doing. The developers decided you don’t bind with the characters enough through storytelling, so they make you talk to them and force you to bind that way. 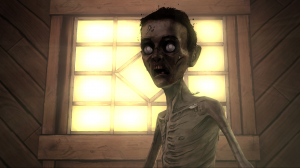 There are zombie kids to.

To me, this, again, looks like lazy writing – instead of figuring out how to do it right, the game just gives you a round of talking every half an hour or so. It might not be obligatory – I haven’t checked, but it sure feels that way. I mean, at one point, I start at the front of a train, and on every screen, there’s a character waiting to talk.

Now, this could be OK, if it only didn’t happen so often. As it is, the Walking Dead feels extremely formulaic which, to me, ruins the immersion.

I was actually surprised at one point

OK. Honestly, the game isn’t as bad as I’m making it seem. I’m just focusing on the bad parts. The truth is, I’m enjoying the story about as much as I enjoyed the story of the TV show. After getting used to the bad gameplay, I’m doing a better job at getting it over with quickly, so it doesn’t bother me as much anymore. The fact that I enabled the option to better indicated interactive spots on the screen also helps – I figured since I’m not playing it for the sake of playing it, I might as well make the playing part as easy and quick as possible.

And as I said, the story did surprise me a few times. I was starting to get used to the basic formula, so at one moment, I thought to myself “oh great, and now this one dies to”, only to have the game pull a Mass Effect 3 Grunt dies and then he doesn’t move. Of course, the game did it somewhere between a few extremely predictable events, so let’s not give it too much credit.

Bugs are starting to show

So we’re back to talking trash about the Walking Dead. I started to encounter bugs, especially in episode 3. It’s mostly limited to graphical glitches, but sometimes, it also affects gameplay. Objects at the edge of the screen disappear from before they’re completely gone from the camera’s view, or sometimes even if they’re right down smack in the middle of the screen. 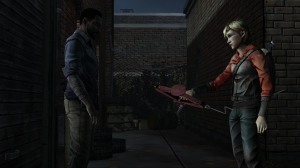 Molly is one of the new arrivals to.

The worst, and the funniest, was when one of the characters (I don’t want to spoil too much) was holding their child in their arms – the kid completely disappeared, making the woman basically hold an air baby. It really ruined the scene, which was supposed to be sad.

The Rules serve the Story

This is another example of lazy writing. The characters talk about how they lack ammo, but two minutes later, you get to shoot zombies to infinity, though it could have been written in a way to make the whole ordeal avoidable.

In Episode 2, everyone was hungry, but in episode 3 and 4 the lack of food, which is apparent, is barely even mentioned.

There’s one thing that also concerns the TV show, and probably the graphical novel series. The gist of it is that everyone is infected. It doesn’t matter how you die – if the brain lives, you get back up. The reason why you die due to zombie bites is because they infect you with various germs and stuff, so that random infection kills you.

Did anything that would explain these two things ever happen in the novel, TV show or the game? I honestly can’t remember, and it makes no sense to me.

I mean, they’re walking, feeding dead people, so I guess some suspense of disbelief is needed, but if the rule was invented for the sake of realism, then it should be consistent, or at least sort of logical.

As I said, though, it’s not all bad. At one point, the game at least considered the idea of zombies starving to death. I don’t want to describe the moment completely, but there was a zombie that died of hunger and then rose, continuing to not have any food until the game’s characters find it. It wasn’t able to stand straight, so I guess that the corpses do eventually stop moving and there is some sort of metabolism involved in the whole hunger thing.

Some of the Characters are extremely annoying

I won’t say which characters, because again, the story is the only thing the Walking Dead is worth playing for, so I don’t want to spoil it, but several characters exist in the game that I just wished would die at the start. They’re inconsistent, annoying and the game is trying to show them as people important to Lee, which makes no sense to me, because all they ever did was to demand too much from Lee and bee completely unreasonable. 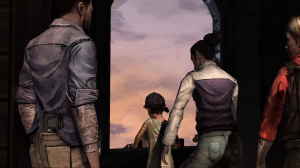 The married (?) couple are the most consistent characters in the game.

There’s one character that’s especially like this, and it should soon become obvious to anyone playing the game.

Or maybe it’s just me. Maybe I’m the one whose brain doesn’t work right, so it just seems off to me. Feel free to insult me in the comments if you disagree.

That’s honestly how it feels. Mass Effect had a great overarching story. I absolutely loved most of it. However, each game had branching parts and they all needed to somehow end. Even from one game to another, it was getting obvious the writers were trapping themselves, creating too many branches and making it too difficult to end it all properly and tie up the loose ends.

Tying up the three games with each other was difficult enough, and it showed between the sequels. Ending it all completely was basically impossible, which is why the ending of Mass Effect 3 was received so badly.

With the Walking Dead, it seems like the writers had this problem constantly, since there are so many branching moments throughout the game. At points, the only viable choice was to simply merge two branches badly, because leaving them separate would create an impossible situation.

From what I see other people saying, this is exactly what’s happening. The game’s story adapts and changes depending on your choices, but there are so many choices that most of them just don’t matter. A character fills a role taken by another character, or the game doesn’t put that character in the spotlight any more, or it simply kills them off soon enough.

Sadly, I think it would have been better if some of these choices simply didn’t exist. At least then, the writing would have probably been better.

It’s the exact same thing I said in my previous posting – the fact that they wanted a game; the gameplay, is working against the story.

I keep repeating this, because I have to. It isn’t A Song of Ice and Fire, but the Walking Dead provides an interesting story, which I want to follow to completion.

I’m looking forward to playing the last episode of the Walking Dead. In one small part, it’s because I just want to finally get it over with, but a much larger part of it is because I want to see how it ends. 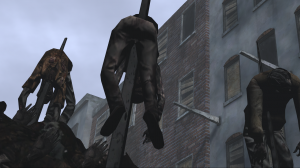 Zombies on spikes! It had to happen at some point.