It didn’t take long for me to go back to Warlords Battlecry 3 after waking up this morning, especially considering how the Daylight Saving switch messed up my sleep pattern. The game dragged me in and doesn’t intend to let me go until one of us is done fur. Luckily, It turns out the game would fall sooner than I would.

Last night, I got to the human lands with not much to do. This morning, I ended up in the area of Enmouth, where I had to fight four battles on the same map, against Barbarians, the Undead, Wood Elves and Knights, all in defense of the Empire. The fifth battle was again on the same map but against all four enemies at once. The fights stopped being challenging by now, though, since my hero could easily clear the entire map on his own. I still stuck to my old strategy of using him almost exclusively, while building up to fire priests at my home base, but slowly, the Fire Priests were getting used less and less often. 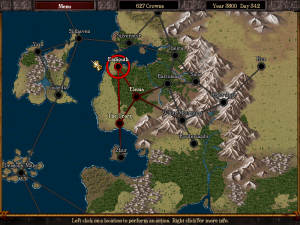 I’ve spent a lot of time here and I don’t think it was worth it.

Beating the five battles provided me with an alliance with the Empire, but that was about it, so it didn’t feel worth it. I moved on and got to the dwarven lands, where my intention was to somehow make them like me again. For some reason, I made them and the Dark Elves my enemy. I can understand the Dark Elves, but I don’t remember fighting Dwarves that often. The problem was, I couldn’t find any missions, regular or repeatable, which would help me with that goal.

I wandered onto an Undead island, where I got one more artifact during a chain of three missions. The Heart of Zhur now makes my hero completely immune to poison. After that, I moved on further south to the Orc lands, where I mostly fought goblins, but not before going through White Mountains, where I got one more artifact – The Gryphon Eggs. This give 30 Exp to every Gryphon I train, so they’re basically worthless.

I then finally got to the area with a mix of Plague, Orc and Dark Elf presence, where I got the Cureall Stone with my first Archmage hero. I did the same here and suddenly, I was only two actual artifacts (and two fortress keys) short of a full set of bonuses. One of the artifacts was found soon after, at Khaz-Barak. This place, according to the in-game description, used to belong to the Dwarves, so I was hoping the replayable missions here would help me get back on their good side, but even after several repetitions, it just wasn’t happening. I did get the Mythril Vein, though, which gives 10 extra armor to my hero.

I had one more look at my list of bonuses and realized the last one was called “Champion of Bartonia”. Bartonia was an in-game location, part of the human areas, but for some reason, I skipped it. I went back and realized that one of the replayable missions wasn’t actually replayable. I played through the chain of arena battles and soon, the final bonus and the champion title was mine. The final duel was a bit difficult, since like me, the enemy hero had an item that has a chance to heal the user, but eventually, my superior stats won. “Champion of Bartonia” also increases my attack speed by 50%, just like the Winds of the Desert do, so now I was attacking at an insane rate. 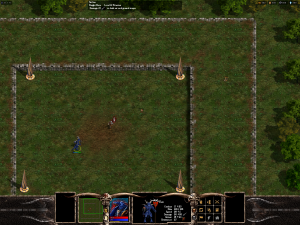 This thing basically made me invincible. I’m now attacking several times per second, with a chance to heal myself or do 500 extra damage to an enemy with every hit. Basically, almost nothing in the game can do enough damage to me fast enough to kill me.

I was close to the area of the Plague Horseman, so I took the chance to get one more fortress key. Just as it was with Bane, I had to fight with the Plague as my ally against Demons and a bunch of neutral floating skull enemies. This was easy to do, and again, just like with Bane, I got the key and a chance to ally myself with the Plague. I refused, because i would lose even more favor with the Dwarves. In hindsight, I should have accepted, since I didn’t get on the Dwarves’ good side before the game was over.

Now I was missing just one more key, so I took the long trip to the plains of Famine, where one more horseman was besieged by Gorgon’s forces. The game is certainly predictable, so again, I fought with an ally (the Swarm) against Demons and floating skulls and got the final key. I forgot to ask for the alliance this time, instead just rushing to the Wastes to get to the final two battles. By this point, other than my assassination chance and a high attack speed, I also had a high running speed, thanks to investing into the Running ability for the past few levels, so clearing missions was even faster. 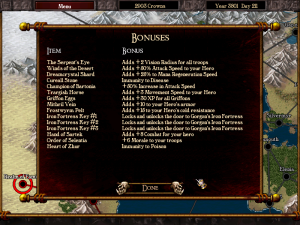 I caught them all! Not all of them are extra useful, but some are quite nice.

The first of the final two missions was basically a repetition of my first “Search the Wastes” mission. It took place on the same map, with the same enemies and again, when I got to the fortress gate, I nearly lost my hero. I finally realized why to. Apparently, there are two types of those floating skull enemies. The first use melee attacks, and they’re harmless. The second type uses ranged electrical attacks and hits for 50 points of damage. These are the guys that can easily kill me if I’m not careful. 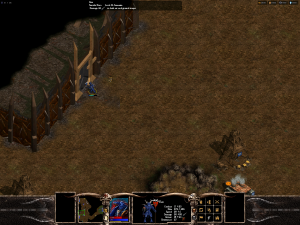 This brings us to the second of the two final levels. Again, it was the same map, but this time, I started out at the fortress and had to survive for 20 minutes against waves of those ranged skull enemies. Suffice to say, I would not have survived for long just defending. Instead, I rushed towards the two small tower bases on the map and destroyed both of them. This triggered the victory screen and that was it – game won!

I got one of those “comic book” cut scenes, the game told me the main objective was completed and that was it. Admittedly  it’s a bit underwhelming, but I can now proudly claim I’ve completed one of the games I played far too much of as a kid, but for some reason, never completed it back then. 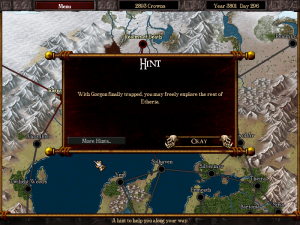 The thing is, this game isn’t really about completing the story. It’s about trying new hero builds and getting more and more powerful. There’s definitely still a huge chunk of the game I could explore. I’m just not sure I’m going to actually do it, since sadly, I have other games I also want to play. That’s the “problem” with gaming today – too many great games, too little time.

Maybe in a few weeks, I’ll try out that mode I’ve stumbled into – the Fifth Horseman. Maybe I’ll go back to one of the previous games in the installment, or maybe even turn towards the turn based games of the series. You see, the world of Etheria is primarily tied to Warlords, a turn based strategy RPG. The Walords Battlecry series is actually a spin off. There’s one more, more recent spin off to – Puzzle Quest: Challenge of the Warlords. The entire series is actually quite fun, but most games, just like Warlords Battlecry 3, suffer from lack of polish.