This weekend, GOG.com had another sale with a couple of great games in it. I promised myself not to succumb to the urge again, but my willpower is weak. I bought Warlords Battlecry 3.

I’ve owned the first two of the Warlords Battlecry games, both in German and greatly enjoyed both of them. I also played Warlords Battlecry 3, but only ever had a pirated copy. I remember greatly enjoying that one as well, especially since it was in English, but I also remember it being quite difficult. Warlords Battlecry is definitely not one of the best series I ever played, but it will always be one of my favorites. This is why, when I saw it on sale, nostalgia got me and I decided to spend the three bucks it cost.

What is Warlords Battlecry

Warlords Battlecry is an RTS with a twist. It plays sort of like the older Age of Empires games, but without as much economy. You take over mines, build buildings and train your military to destroy your enemies. The twist is that you also have a hero of your own making. He gains levels, learns spells, acquires items and transfers from game to game, including the Campaign, the skirmish battles and I believe even the multiplayer. 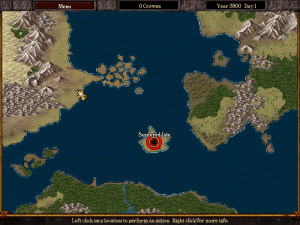 Large and content-rich, just like a good campaign map should be.

The campaign in Warlods Battlecry is something special to. There’s a large world map with locations you can travel to. Each location can have quests, battles, merchants, units to hire and many other things. Other than your hero, a bunch of other stuff also remains persistent in the campaign. You can find artifacts which provide a global effect to your team. You can gather retinue units, which can also gain levels, though not as complexly as your here. You can also somehow gain control of races other than your own, allowing you to take them to battle. Overall, Warlords Battlecry 3 has heaps of replayability thanks to initial hero and race selection, as well as the path you take on the campaign map.

It might not have been a great buy back in the day, but for 3 bucks, it’s well worth your time and money now. There are negatives, though. It’s an old game, using the old RTS control system. It can be clunky and annoying at times, since it doesn’t have the polish of modern control systems like the one in Starcraft II. It’s difficult to micromanage units, so a lot of the times, you just end up clashing your units against the enemy’s. In spite of those things, the game is great.

In the two days since I bought it, I played the game for a couple of hours. I decided not to go with any guides or anything like that. Instead, I’ll play how I like it and if it turns out being less than effective, I can always restart the game. I picked a High Elf Archmage as my hero.  I started out with investing points mostly into Alchemy, with a few into Summoning. During the early campaign levels, I got him to level 16. 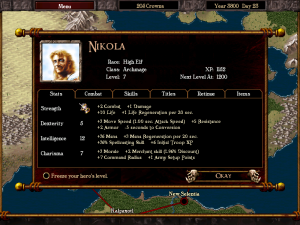 I love menus with lots of numbers in them.

At first, I used the Create Item spell to quickly fill all of my slots with items. Now that I have more mana, I usually spend it on creating golems, for early rushes against enemy buildings. Other than that, I invested a bit into charisma for a bigger command radius, as well as a couple of points into strength, just so I can stay alive long enough to run away from battles.

High Elves are sort of a rounded race, with a moderate emphasis on spellcasting. They need a bit more crystal in the early game, as well as some extra iron in the later game to build their most powerful units. I worked a bit on expanding my retinue to, but most of the time, my retinue units die before getting strong enough. My most successful unit until now was a lich I got from a quest.

I also have to confess I failed miserably on my first two attempts of the first level of the game. I forgot how squishy a spellcaster hero can be, so I lost him to random enemy units a couple of times. He still gains some experience after the battle, though, so most of the time, you can still finish the level. The exception are the levels where one of the conditions is that your hero must not die, such as the first level of the game. 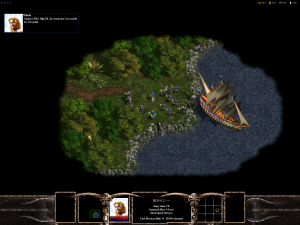 It took three attempts to get through the first level. I got rusty.

My usual strategy is to turtle and build up my defenses until I can start training the tougher units. I also constantly create wisps (the High Elven worker unit) and merge them into ancient wisps who provide an extra income of crystals just by being in the game. During the turtling phase, I keep an eye out for straggling enemy heroes trying to convert mines. If I can, I ambush and kill them which severely cripples the AI.

Once I can build proper flying units and constantly train knights, I start gathering up larger groups of units and attacking the enemy bases, focusing on towers first and then on the other buildings. It usually takes a few assaults to completely destroy the enemy, but that’s just a matter of time. If I ever get to a point where my income is large enough to use my special healing ability (costs 400 crystals per use), then one solid assault is more than enough to clear the whole map.

I’m not sure how often I’ll play this one, but I can promise I definitely will be playing more of Warlords Battlecry 3 very soon. It’s sad there aren’t any games like this one today. The closest thing to it is Starcraft II, but that one is designed in a way that almost completely removes the replayability of the campaign. Don’t get me wrong, it seems fun, but it just isn’t the same.