Now that I only had the final bosses remaining, there really wasn’t any reason left to further postpone leveling up. My intention was to do it strategically, though.

First of all, I needed Cactuar and Bahamut. Cactuar has the Str, Vit, Mag and Spr Bonus abilities. These abilities increase their respective attribute by one on each level increase, as long as they are bound to the character. Bahamut has the Ability x 4 ability, which allows me to bind up to four abilities to a character, meaning I could bind all four bonus abilities.

There is a fifth bonus ability, though – HP Bonus. I decided to skip that one, simply because I could easily junction health and even use other methods of increasing it, such as the Devour command ability.

Now, since I could only attach all four abilities to a single character, I decided to level one character at a time, by killing the other two and leaving them dead. The obvious first choice was Quistis, for one amazing reason. Her desperation move is Blue Magic and one of the spells she can learn is Degenerator. Degenerator outright kills a single enemy, with no exceptions. This ability makes Quistis the perfect character to level first. 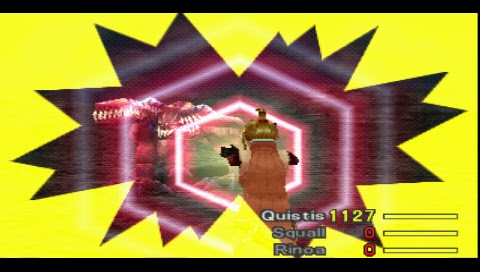 I got her to yellow health, bound all the GFs to her and killed of the other two party members. Then I landed Ragnarok and the Island closest to Heaven and started doing random battles, making sure my strongest spell is bound to her Speed stat. This way, I could easily kill any enemy I encounter with a single hit, before it could even act. Since the enemies on this island are all level 100, this meant getting up to three or even four levels per battle. Suffice to say, Quistis was level 100 in no time.

Of course, I had some trouble and needed to save my game often in order to be able to reload, but all in all, this was by far the fastest available method of leveling. Once Quistis was at 100, it was time to level another character. I junctioned Cactuar and Bahamut to Squall, but kept Quistis alive and at critical health. This time, I could go with an even safer tactic. I could now bind Iniative to Quistis, meaning she would always attack first, so there was almost no danger anymore. I think the average level of my party affects the amount of XP the party gets, though, so Squall took a bit longer to get to 100, but still insanely fast.

After Squall, it was time for Rinoa, but it seemed it all went even slower, due to Squall being level 100 and me not being able to replace him with a lover level dead character. Sadly, it seems I made a mistake by leveling Squall second. Luckily, it’s still quite fast, so it’s not a huge mistake.

Anyway, I didn’t get Rinoa to 100 yet. She’s at about 50 now and I expect her to reach her max level some time tomorrow. If I get the chance, I intend to max out another character to. From what I understand, I will be forced to use all of my characters for the final battles, so they all need to be maxed out anyway.