The next step of my preparation for the finale is completed.

Surprisingly, I already had most of the items needed for most of the weapon upgrades. As expected, the item that took the longest to get was the Adamantine. I believe I needed a total of three for it. One to upgrade Squall’s gunblade to Lionhearth, one for Selphie’s ultimate weapon and one for someone else, Irvine, I believe. Rinoa had her weapon upgraded for a long time now, Zell had all the items needed as soon as leveling was done and Quisits was only missing a common item I could get from the huge claw enemies at the Centra continent. 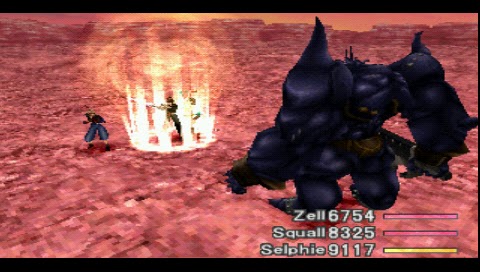 Sadly, a lot of the enemies I needed items from are rare encounters, meaning I had to fight others to.

What I needed to do now was to properly distribute my GFs so all of the characters would have the ability to junction most or even all of their attributes. After some playing around I wound up with Shiva, Diabolos, Pandemona, Bahamut and Doomtrain on Squall. He would be my mugger, while still having plenty of physical damage and speed.With all the stat level bonuses and the final weapon upgrades, all of my characters had their strength above 150 without any junctions, with some even far exceeding those values. As for the other stats, their HP was slightly above 6000 unjunctioned, and the rest of their primary stats were somewhere in the 100-150 range.

For my fighter, which can be Zell, Irvine or Quistis for now, I went with Quezacotl, Ifrit, Cerberus, Alexander and Cactuar. This gave him plenty of strength while still being able to junction everything on needed. The reason the three above characters are more suitable for physical damage is due to their limit breaks. Zell and Irvine use physical damage in their desperation moves, and I also believe Quistis has some blue magic based on physical strength.

As for my healer/mage, I went with the rest of the GFs – Siren, Brothers, Carbuncle, Leviathan, Tonberry and Eden. The spell casting character needs plenty of magic bonus abilities. Again, the junction abilities available to him or her still cover most of the attributes. Again, due to the limit breaks, I think Selphie and Rinoa are more suitable to be healers.

Of course, this role assignment only makes sense now, when I don’t have a full supply of high level spells yet.  Once I stock up on everything, the roles will become meaningless and everyone will excel at everything. This is my next goal.