I have arrived at castle Vebeaux and spoke to the duke immediately. It seems that the peace negotiations are close to completion. Several envoys will soon arrive from Holklanda and Monitor Shigaz has asked for me specifically to help secure the castle and stop any potential assassins. There’s some work being done under the castle. Some new halls are being dug and Shigaz feels that this would be the most likely direction an attack could come from.

I went down there immediately, and promptly got attacked by cultist assassins. I disposed of them and found Shigaz in the next room. He was mortally wounded and, in his delirium, thought I was working with the assassins. He attacked me, so I was forced to defend. I incapacitated him quickly and tried to heal him from his previous wounds, but it was too late. Before he died, he said the duke sent him down here. There’s something suspicious going on. I went through the passages and soon emerged outside the castle, in the woods. The duke’s men were already after me.

I fled through the forest and soon encountered a helping Holklandan who directed me to an escape route. After some fighting, and some dodging, the route led me to a brigand encampment. However, they were not hostile. In fact, they seemed to expect me. Their leader, Minaka, said the rogue Hand, Gavin, told them to expect me. He is here, in the camp, and he want’s to talk to me. I obliged. 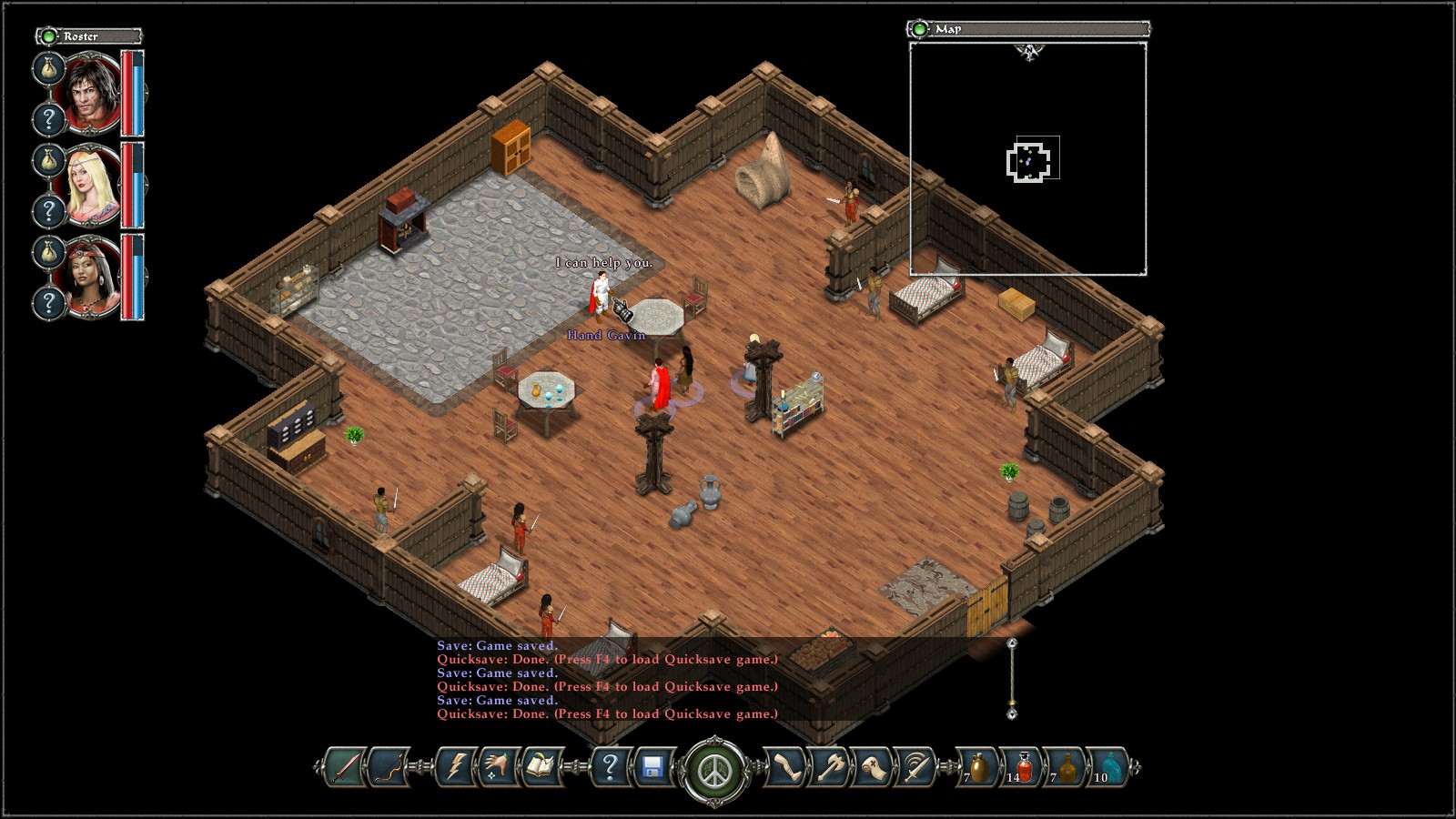 I hate getting myself surrounded, but sometimes it’s unavoidable.

Gavin told me he was betrayed by the duke, just as I was. Publicly, the duke works on forging a peace agreement with Holklanda. Privately, however, he is working for the Tavon empire. Gavin uncovered this and was framed because of it. Avadon has failed to prove his innocence or to even show concern for him, so he became a brigand. As for me, I need to somehow get to the pylon and return. He has an idea how, but first I need to help him. I need to kill a hunter that’s become a threat for them. He is to the south.

I went there and realized the hunter is a she. Tender Melisande, to be precise. The same animal tender who gave me several tasks at the castle. I told her the truth about the duke, but she didn’t care. By her own words, Avadon’s time is past. It has become weak and corrupt and the duke has a better path. I said I agree with the statement about Avadon, and she was surprised, but also told me her orders are clear. I guess there was no way out of that battle. She and her beasts were tough, but they posed no threat.

I reported this to Gavin and he decided to help me. I need to clear the way to the east, off the main road, and look for a hidden passage. He will wait for me there. I went as he instructed and soon met the Wayfarer again. No job this time, only questions he needs answers for. He asked me where my loyalties lie, how I feel about Avadon and if I would be willing to have Redbeard “replaced”. I would prefer to just leave, but the mark that makes me a Hand cannot be removed and it also means I cannot run away. The only option is to overthrow Redbeard. Before he left, he gave me advice. I should spare the duke. It will mean a lot in the future. With that, he was gone and I continued. After some fighting, I met up with Gavin, and soon we were at the castle.

Sadly, Gavin soon fell to a trap, so I was forced to continue alone. I fought for a long time, moving back and forth between possible routes of escape, defeating the duke’s lackeys, until I finally reached his inner chambers. He pleaded for his life, explaining his motivations, appealing to reason, and he finally succeeded. I let him go. In the end, he was just trying to protect his people. It’s Redbeard that needs to go down. The duke fled, the way to the pylon was open. Time to kill Redbeard.