We stepped through the portal, but only Cordelia came out on the other side. The Avadon pylon was damaged, so this must be the reason. I arrived to the sounds of battle. The fortress was under attack. I fought my way through the passages and soon found Miranda in a pylon room I didn’t have access to before. The pylon was active, but I couldn’t tell where the portal was leading. Miranda said that Avadon has been betrayed. Infiltrators gained access and traitors in our own ranks helped them get the upper hand.

I told her everything that happened in castle Vebaux, but she didn’t at all seem angry at the fact that I let the duke go. In fact, she seemed pleased. She asked me about the Wayfarer and I told the truth. I intend to overthrow Redbeard. She then pointed her wand at me and everything was clear. She realized Avadon will fall and she is escaping to the Tavon Empire – the new center of power. Everything that happened to me, she orchestrated. The deaths, the events I’ve seen, even the Wayfarer. Now she wants me to finish it – kill Redbeard and take my place as the new Keeper. I agreed to let her go.

She stepped through the portal and I started fighting my way to the central stairway, to Redbeard. There weren’t many assassins left, so I didn’t have much trouble getting to the upper floor. As soon as I ascended the stairs, I’ve found Hand Callan. I told her about Miranda leaving, but I decided to leave out my intentions. In the next room, I’ve found Sevilin and told him what I intend to do. He expressed his agreement and joined me. I then met the rest of them and did the same. Jenell joined me, and I sent the other two downstairs, to fight off the assassins. We moved on and soon found Redbeard in one of the chambers, fighting off a shadowwalker. It was the Wayfarer. He jumped back and, as they both spotted me, he took off his mask. 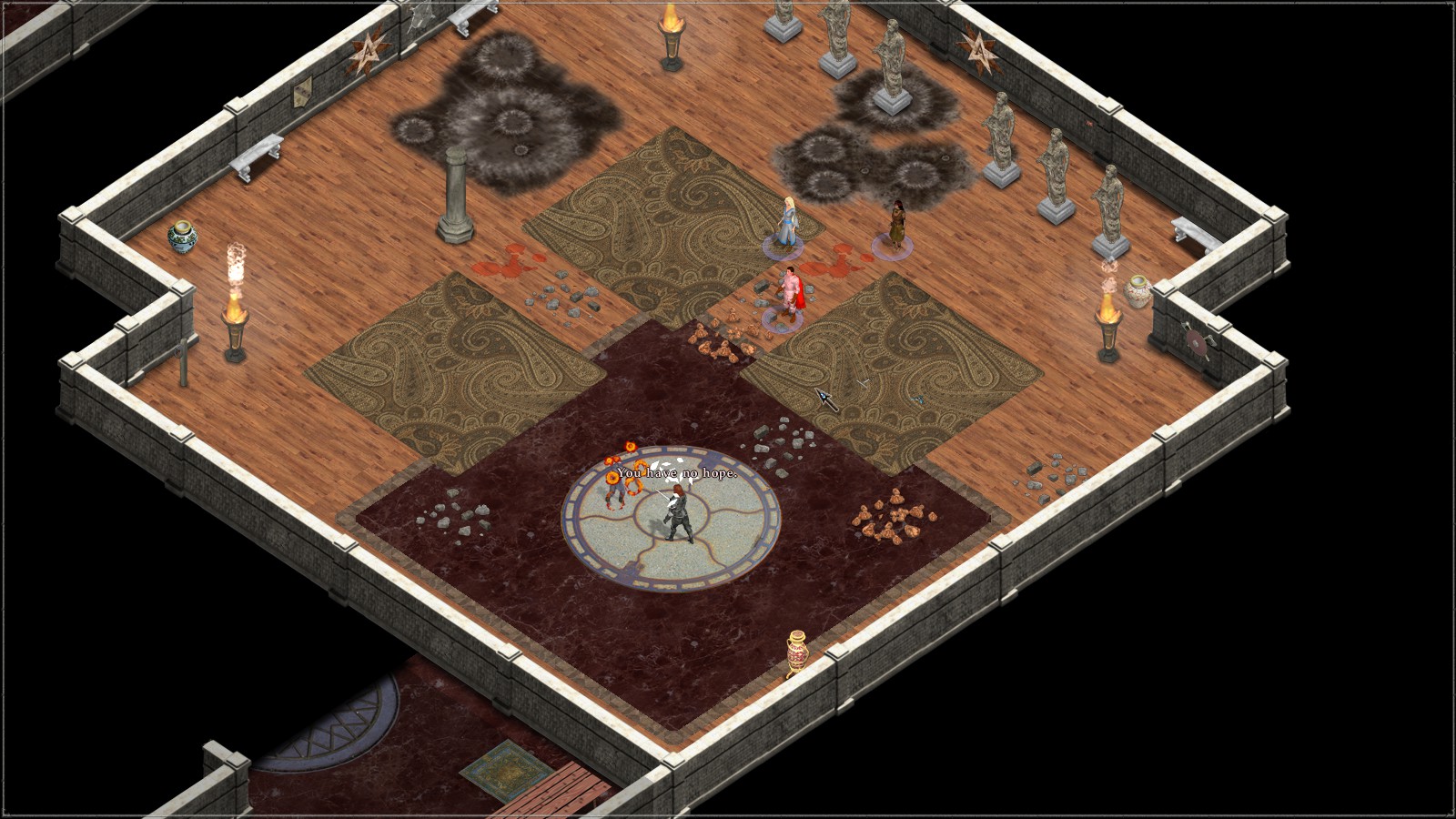 It was Shadow Tarkus, the same man that escaped the prison on my first day of service. I jumped to battle on his side, but it was too late. Redbeard killed him in an instant. It was my turn. I fought him, and he beat me to a pulp. I tried it again, and he did it again. I tried it a few more times and failed. The closest I got was to about 30%. I tried reducing the difficulty – same thing.

Ok, this is not the outcome I expected. I went to use Google, and found out what my problem was. Apparently, you can have a party of five in that fight. I thought that when I was saying my companions to go defend the bottom level, I was actually choosing which two I’ll take. In reality, I was just gimping myself, because I could take all of them, and, as long as I did their quests, I would have all of them with me in the final battle. 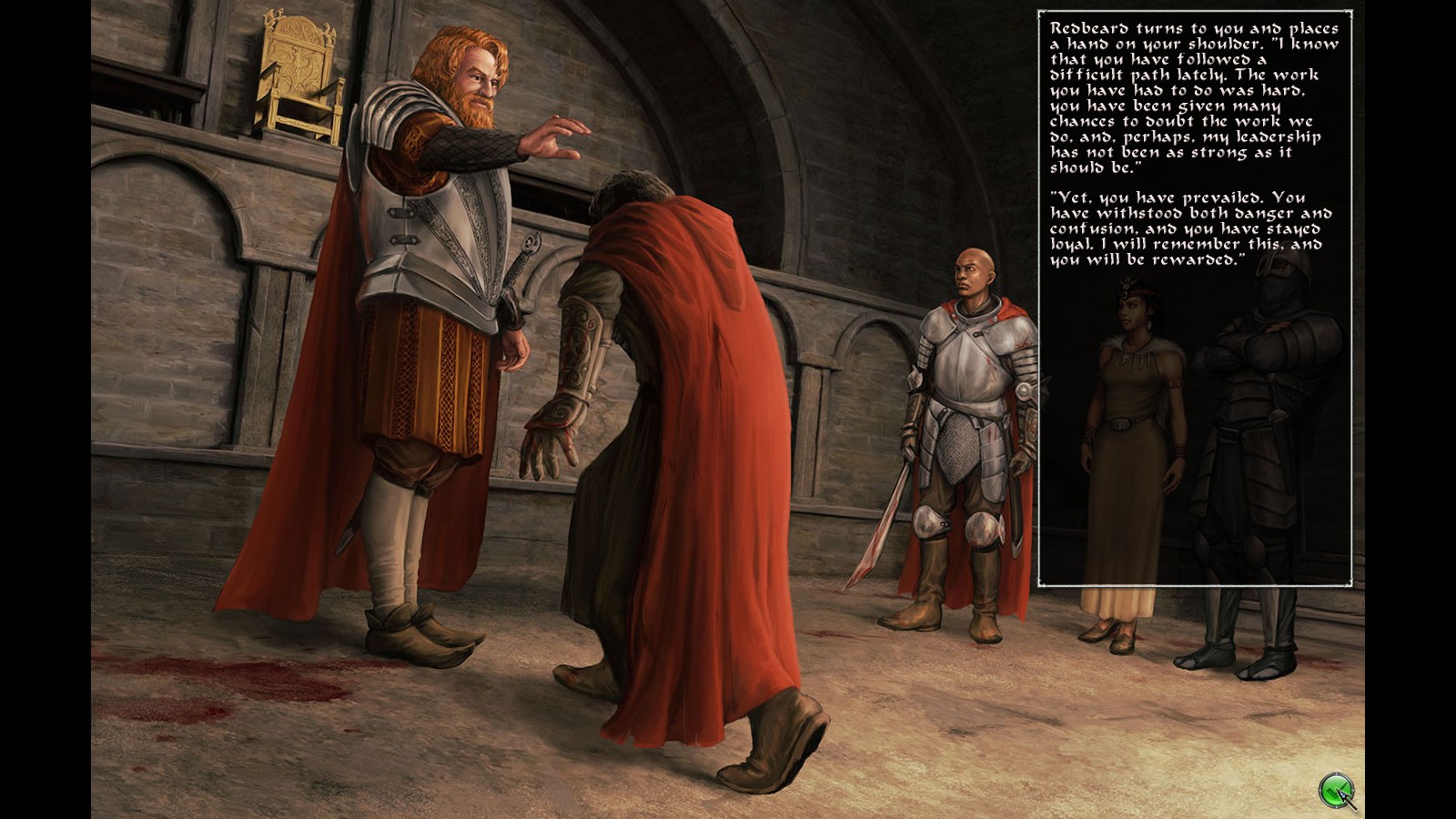 The ending was several screens with flavor texts, based on my choices.

Well, this is disappointing. I decided to go for the “positive” ending and not take down Redbeard. Since I was not at all loyal to him, the only option I had was to stay a hand under his command. Oh well, I guess another playthrough will be needed to see the other endings. I have a few achievements missing anyway. For now, the game is finished.

So, officially, by loyalties were questioned, but in the end, I remained loyal to the pact. Redbeard has seen, partially, the error of his ways and decided to make things different. The Pact is in danger of falling apart, but with work, it can prevail. Avadon is not seen as the omniscient, omnipresent, all-powerful institution anymore, but that might be a good thing. There’s hope.

I’m not really sure if there’s an absolutely positive ending here, so this will suffice.