This is my second post today, so be sure to check out the first, not to miss anything.

It was time for my mission again. I met up with Shigaz in the woods and he gave me some information. We are to find where the bandits reside and destroy them. I asked him to wait while I scout ahead, simply because I can then move at my own pace and not worry about something or someone killing him. As soon as I walked a bit to the north, the Wayfarer aproached me again. I seem to have encountered a bug, though. I destroyed the titan paper’s, but the only conversation option I had was one that said I didn’t. Either I missed something about the quest, or this is a bug. He offered me another task, though. The merchant I helped before now want’s his competition completely removed, so she asked me to lie to the authorities and have him accused of some random crime. This doesn’t really appeal to me, so I refused, but the quest is available to me anyway. He didn’t seem dissapointed by the refusal, though. He seemed more surprised that I still have a conscience.

I’ve stumbled into a camp of surly woodsmen, or at least that’s how the game describes them. They weren’t very talkative and seemed completely unimpressed by the fact that they met a Hand of Avadon. I’m guessing they will be important later, but for now, I moved on. 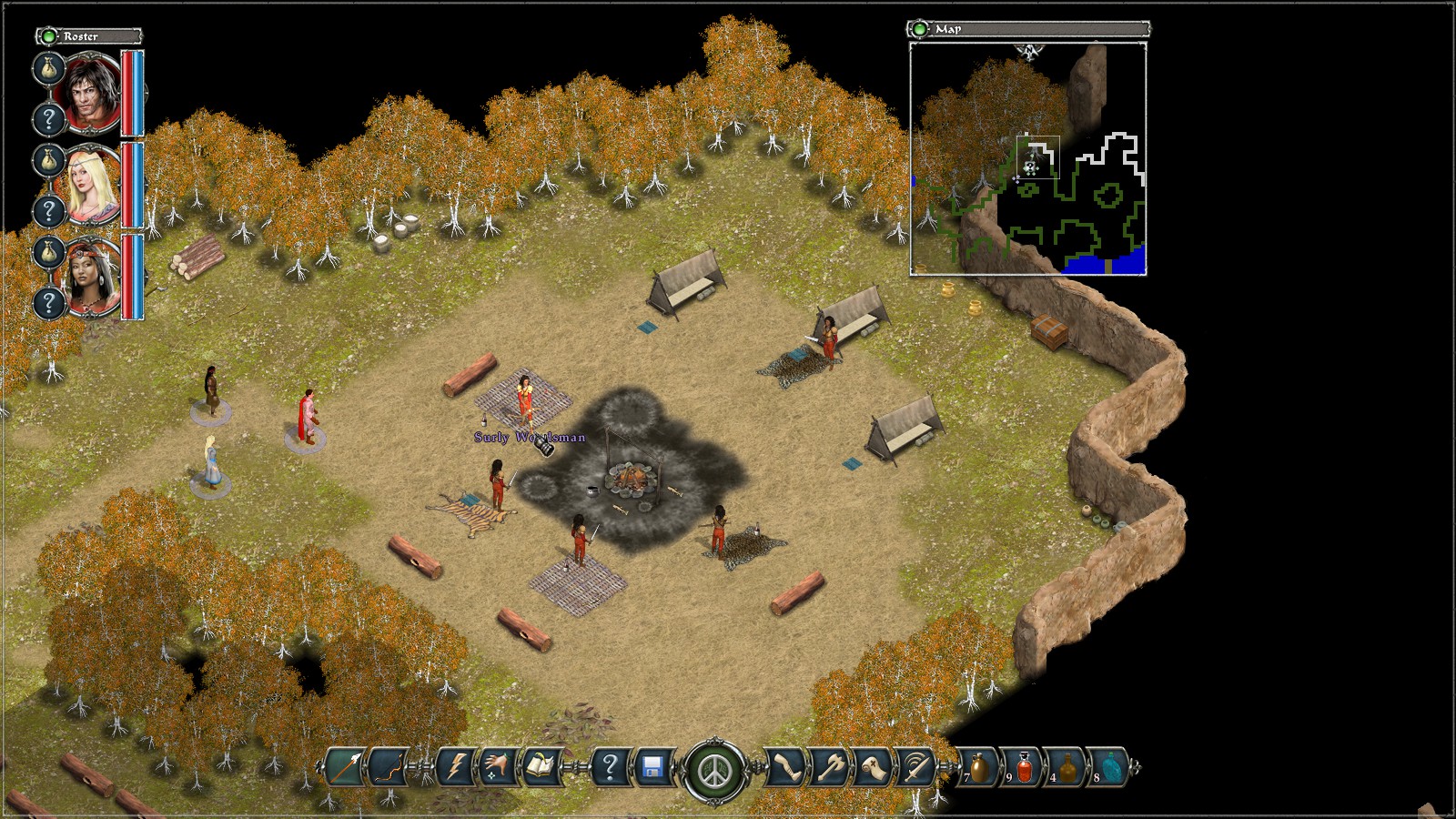 The next thing on my path was a crumpled old tower. I started exploring it and clearing the spiders it was infested with. There was also a humanoid presence I kept encountering during the exploration. It seemed non hostile, but it kept running away, floor after floor. On the third floor, I’ve finally cornered him and his invisibility wore off. It was a frightened mage named Herenus. He fled from the Tavon Empire to hide here, but his tower defenses backfired, causing the infestation. I got nothing else out of him, so I guess he will be important later.

I left the tower and kept exploring. To the southeast, I’ve found an abandoned camp where I cleared some rats out of an old building. This got me some leather and other minor loot, bot nothing of importance. There was another tower, this one still under construction, very near the abandoned camp. The owner was Incanter Maron, the mage I was supposed to find and request to return to the castle. He was trilled that he is allowed to return and thanked me for the news. With this, I  finished exploring the outlying regions of the woods and moved inwards. In one of the clearings in the central area, I’ve found Orian, the spy woodsman I’ve met before. Since the authorities asked me to kill him, I did just that. Well, actually, I offered him a chance to leave first, but he refused.

With the region clear, It was time to return to Shigaz and take him with me. He led me almost straight to the camp of those surly woodsmen. Well, it turns out they aren’t woodsmen at all. He offered them more than they would earn if they return to the castle for questioning, and they attacked. It was easy to deal with them, so they weren’t the ones we were looking for. We continued. Shigaz led me through most of the areas I explored until we finally reached the rocky part in the southwest, where he found a hidden passage. Shigaz was ready to get in, bot only with me. My companions needed to stay behind.

As soon as I was alone with him, I asked Shigaz why he only allowed me to follow. He said he finds my companions and their intentions suspicious. All of them are of questionable loyalty and strange origin, but somehow, they have all gathered around me. We started going through the caves, fighting bandits on the way. Pretty soon, we were forced to trigger an obvious trap and Shigaz was injured to the point of not being able to fight. I was forced to continue alone.

After a while of sneaking around and exploring passages, I’ve encountered another shadowwalker, Harua of the Honored Forge. He was on a mission of his own and offered me some advice on how to continue. On a cavern near him, I’ve found an old, withered drake. It attacked thinking I was gonna steal his egg. Once he was dealt with, I took the egg, remembering the castle beast keeper needs one.

Thanks to the key I got from Harua, I managed to enter the bandit fort and, after some fighting, I’ve found their leader. His name was Audric, and he was a cultist of, the way he called it, the Deep Earth. He didn’t give much information and instead almost immediately attacked me. I killed him and the goons he summoned with ease. I took his very nice staff and equipped it immediately. With him out of the way, the bandit attacks will probably stop, so my mission was complete. I returned to Shigaz and met Harua again. He was administering first aid to Shiguz. Before we left, Shiguz warned me that the my shadowwalker companion might have an issue with Harua, since their clans are feuding, so I should be careful in approaching that. I left the caves and returned to the castle.