I got stuck for a while, trying to find a water route to the northwestern caverns with one of my boats, but then I remembered a locked gate near the giant’s castle. As expected, the key I got within the castle unlocked the gate and opened a way to the castle docks, where two new boats were waiting for me. I started exploring the new area and very soon found the sage who was in possession of the last piece of the password.

Slowly continuing to the west, exploring every possible area, I’ve stumbled into a hidden tower with the only approachable way blocked by an energy barrier. I tried passing through it, but I died instantly. Thankfully, the game saved automatically just before I made this completely uncalculated choice. 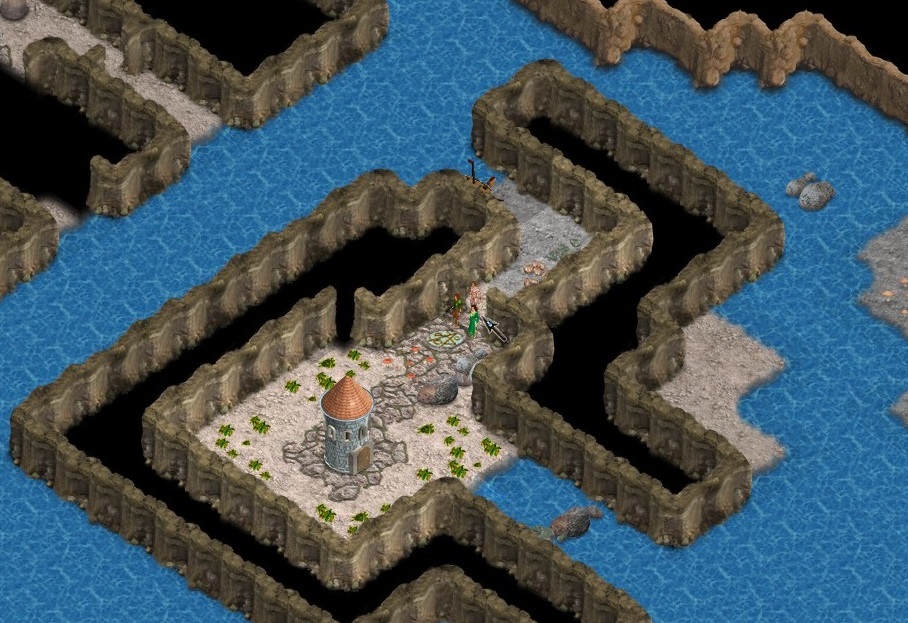 I never got this far in the original Exile or Avernum, so I have no idea if some of these locations are actually new or not.

Other than that, the exploration was rather uneventful, with only a bunch of minor encounters and nothing of real importance. As I was approaching the abyss, I again stumbled into a concealed Imperial base called the Black Spire. I explored what I could of it, but parts were inaccessible or hidden behind impassable traps. From what I could tell from the documents I’ve found there, the fort is used as a protection for the Empire. What kind of protection and from what, I have no idea.

Eventually, I’ve sailed my boat all the way back to Erika’s tower. The problem is, I’ve never found the man she wanted me to find. I either didn’t look well enough, or there was some sort of a misunderstanding.

I decided to clear out my quest log for a bit, so I started roaming around Avernum finishing up minor tasks. Once the log started to look decent, it was time to go have some fun with Grah-Hoth. I spoke to Rone, the castle mage, who told me the demon is trapped in a bottle, in his fortress. In order to kill him, I have to first free him and I need a blessed athame to do that. If there is one in Avernum, someone at the Tower of Magi should know about it. The tower has its own problems, though. It seems that Linda has an unhealthy infatuation with demons and is keeping a haakai lord captive at the tower. Since Solberg, the responsible member of the Triad is away, this could be a problem. Luckily, Solberg left a message embedded in a crystal in a cavern nearby, saying if there’s any trouble, to contact him at his tower near Formello. 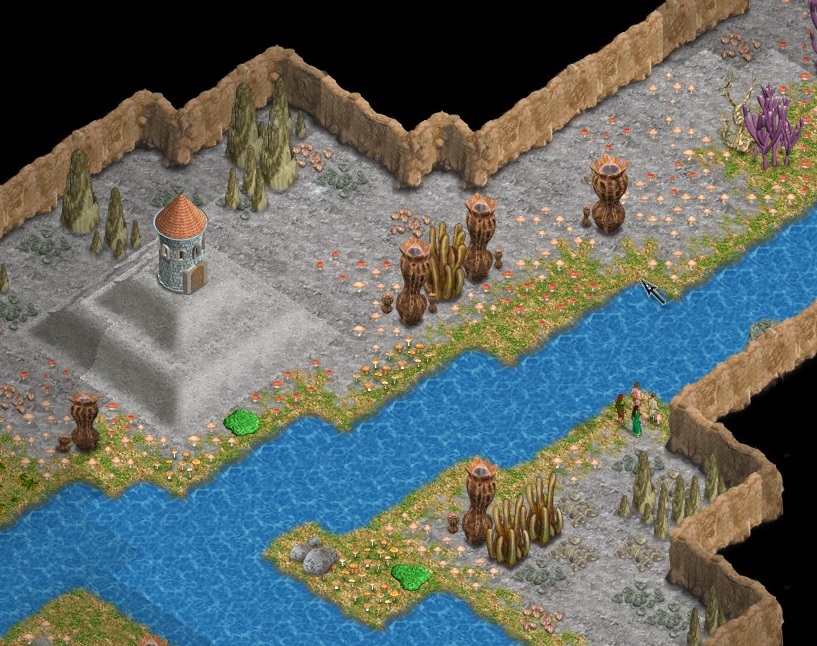 The story took me back to Erika’s tower on several occasions.

I’ve already been at Solberg’s tower before, but I needed a password to get in. Now that I had it, that wasn’t an issue anymore. Solberg explained what was going on. The mages at the tower are being slightly power hungry. They want the haakai lord to lead them as a chieftain. Of course, dealing with demons never ends well, so this needs to be stopped. He gave me a key I needed to access the place where the haakai is held and sent me on my way. I returned to the tower of magi and started going through the central, yet unexplored area.

The place was filled with minor and greater demons. Speaking to one of them revealed the trapped haakai lord is Adze-Haakai. In a room nearby, after killing a couple of demons, I’ve found the Blessed Athame. Adze-Haakai was on the top floor, waiting for me with the Onyx Sceptre next to him. Mostly in thanks to Demonslayer, he wasn’t impossible to deal with. The battle lasted a long time, but I emerged victorious. I’ve reported the events to Linda and, as expected, she wasn’t very happy about it. With the Athame in hand, it was time to go to Skarragath, to free Grah-Hoth so I could kill him. 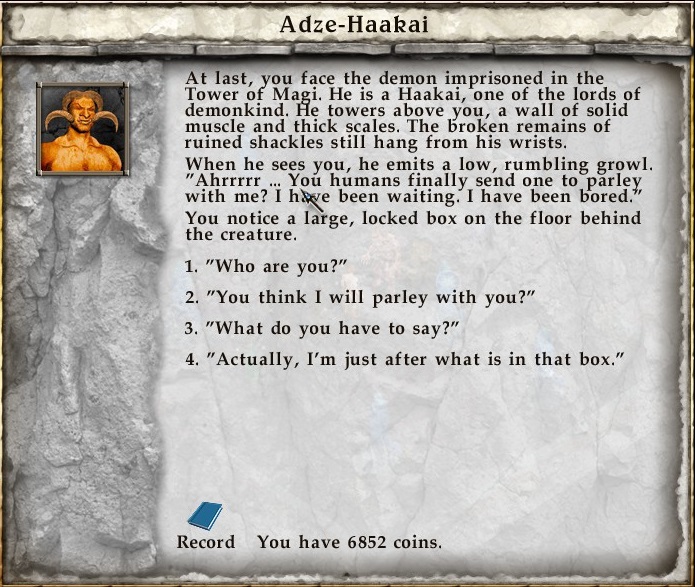 The Haakai are the highest cast of demons in the world of Avernum.

Skarragath was southeast of Erika’s tower. In order to gain access to it, I had to open the gate at the guard post before it. When I did that, the defences activated, causing a host of undead guardians to attack me. Once that fight was over, Grah-Hoth prison was open for me. I went there and used the Athame on the vessel containing the demon. There was an explosion, and he was free. Now it was time to find him in his fort and kill him.

His fortress was to the north. I had a hard time even getting to it, fighting host after host of demons. Eventually, I got to the entrance, where I killed one of the demon king’s lieutenants. I got a key from its body, which allowed me to enter through the service gate. It seems Grah-Hoth’s imp slaves really dislike him, because they’ve pointed me in the direction of a secret passage to the inner area. 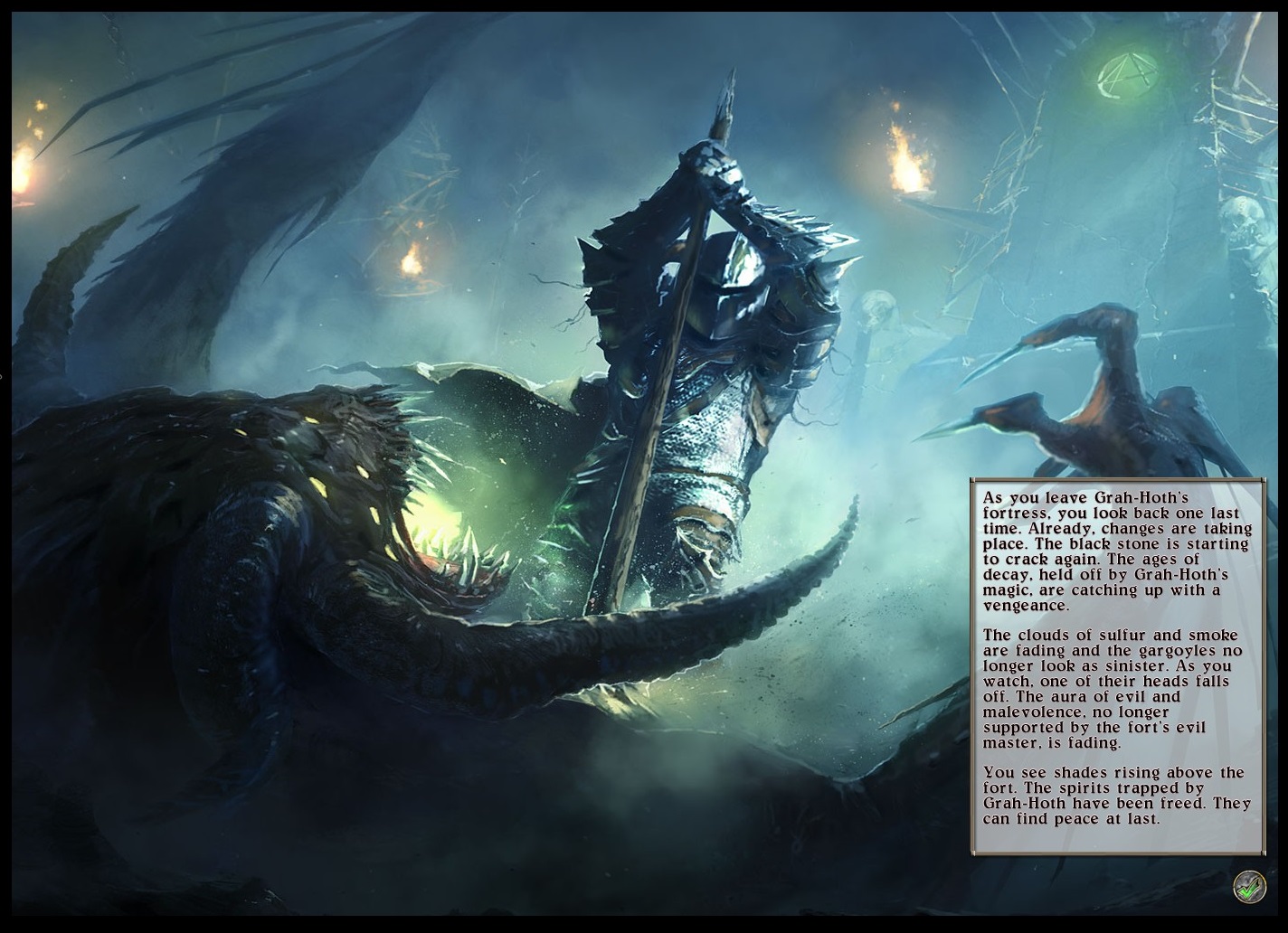 I quite like these textual “cutscenes”. They introduced them in Avadon, I believe. It’s a pretty effective, while still cheap way to tell the story.

After a long series of battles with tough demons, I’ve finally found Grah-Hoth’s throne room. He started summoning waves of demons and undead, but I kept my focus on bringing him down. Eventually, thanks to Demonslayer and some powerful spells, he fell and it was over. I’ve gathered all of his treasures and left the fortress. King Micah was pleased that this great threat to Avernum is finally gone for good.